Way to unlock: You need to complete one of the missions connected with the last major heist (The Big Score), i.e. either mission 79 (the Subtle variant) or mission 83 (the Obvious variant). You can now go to the villa in the Vinewood Hills (letter F on the world map).

Additional information: All in all, this is not a mission per se, and rather a short meeting with Devin Weston. Still, it is VERY important from the standpoint of the plot, because it concerns the selection of the game's ending.

NOTE: After this mission ends, Franklin will have to make a choice of one of three possible endings. The decision that you take is irreversible so, it is highly recommended that you save the game before meeting up with Devin! 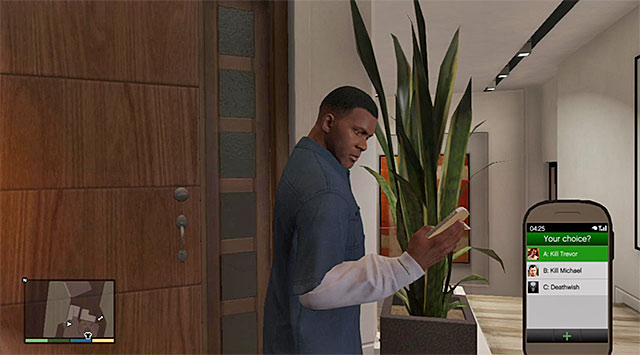 While playing as Franklin you need to return to his estate in the Vinewood Hills. After you get there, approach the marked point, turn back and return to the exit door. You are going to meet Devin Weston who will give Franklin an ultimatum of a kind. After the meeting finishes the main protagonist will select the cell phone from his inventory (the above screenshot) and this is when you will have to make a choice as to the game's ending. The available variants are:

NOTE: If, in spite of my recommendations, you have chosen either ending A or B, you should make sure, beforehand, that you have completed all of the side missions available for Trevor/Michael.