This page of the guide to Grand Theft Auto V has a walkthrough for mission 79 - The Big Score #2 - the subtle variant. Our GTA 5 guide explains how to stop the armored vehicles, how to infiltrate the vault, how to manipulate the traffic lights, defeat Merryweather mercenaries, and how to escape.

If you chose the obvious variant for The Big Score, check out the walkthrough for mission 83.

Way to unlock: You need to complete main missions 75 (Stingers), 76 (Gauntlet - Pillbox Hill), 77 (Gauntlet - Rockford Hills) and 78 (Gauntlet - Mission Row). You may now pay another visit to the strip club (letter H on the world map).

Additional information: You have, probably, already figured out that there is a quite log mission to play through. The initial part of the heist is very simple, and it assumes that you stop the armored vans and use them to gain access to the vault. In the middle part of the mission, there is going an interesting interlude to take place, connected with redirecting the traffic. The final part of the mission is the most exciting, because you first are going to need to win a fight with Merryweather mercenaries, and escape the police pursuit using the cars that you have stolen earlier. 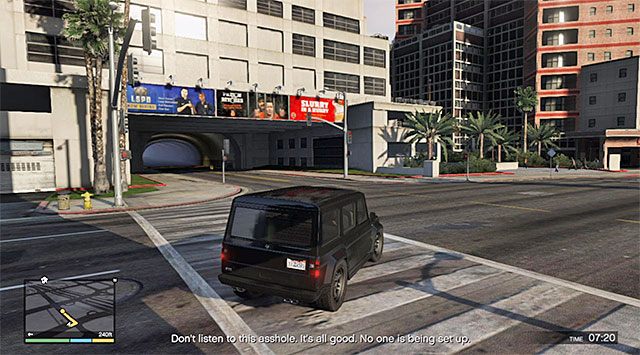 The tunnel that you need to wait for the convoy in

Just like earlier, you start off the mission playing as any of the playable characters and you need to visit the strip club which belongs to Trevor. After you see the cutscene, cut to Michael, get into the SUV and drive towards the tunnel located to the North of here. You need to reach the tunnel within an hour of the in-game time but, since this is a mere half a mile, this should be no problem to you. After you get there, stop the car in the tunnel and wait for the convoy to appear. 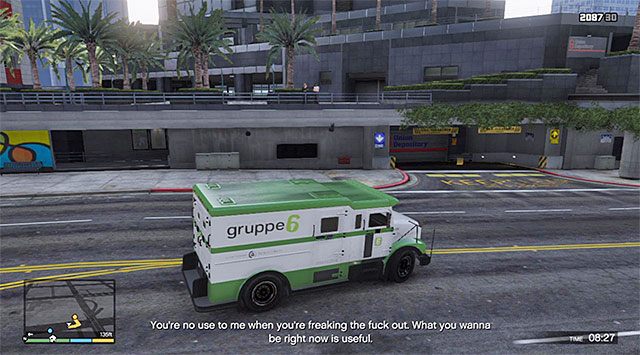 The entrance to the underground garage

Press the button for throwing spreading the stinger and drive away a bit from the place where they are spread. Wait for the tires of the armored vans to burst, get out of the car and start targeting the guards but, try not to kill them. After you take Casey hostage, get into one of the vans and drive away, towards the underground parking lot's entrance. 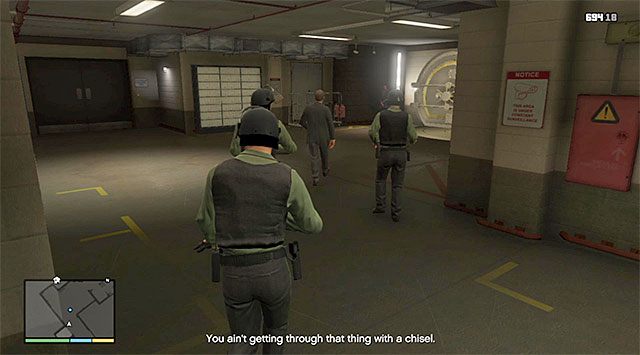 Keep following the bank manager and do not use guns

The next part of the mission is also very linear, because you need to keep following the bank manager to the elevator and, after a few moments, to the bank's vault. Watch a cutscene here and set out back towards the elevator after it finishes. Wait for the gold to be loaded up and drive out of the underground parking lot. Follow the other one of the armored vehicles and, after you receive a notification of the appearance of the Merryweather units around, cut to Franklin. 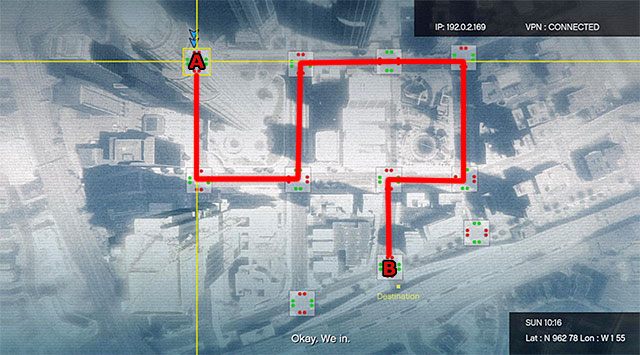 Ahead of you, there is a mini-game that consists in manipulating the traffic lights on the convoy's route. Look at the above screenshot where A is the starting point, B is the destination and the red line marks the route. You need to perform two different actions. First of all, keep changing lights along the convoy's route (blue arrowheads) to, to the extent possible, make green light wait for the convoy at each of the crossroads. At the same time, try to slow town the Merryweather units (red arrowheads), by changing the lights on the crossroads that they reach. Note - if you want to complete this mission in 100%, you need make 10 such changes at most so, restrict yourself only to blocking off only those of the units that are very close to the convoy. 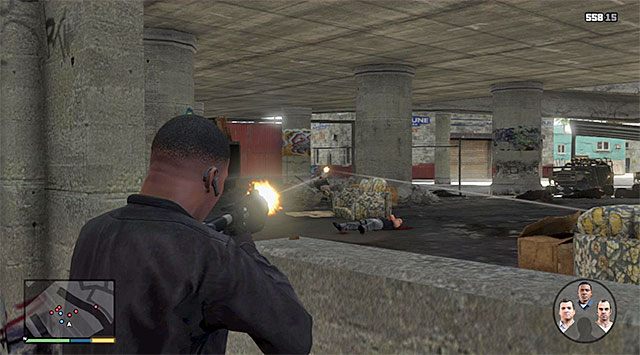 Leading the convoy through correctly, will unfortunately not get things done, because there will appear the Merryweather mercenaries while you are unloading the trucks and loading the gold into the sports cars. Start the major fight of this mission, during which you will be granted freedom of cutting between Michael, Trevor and Franklin. The good idea is to spread the three around this location, thanks to which you will be capable of covering larger area. 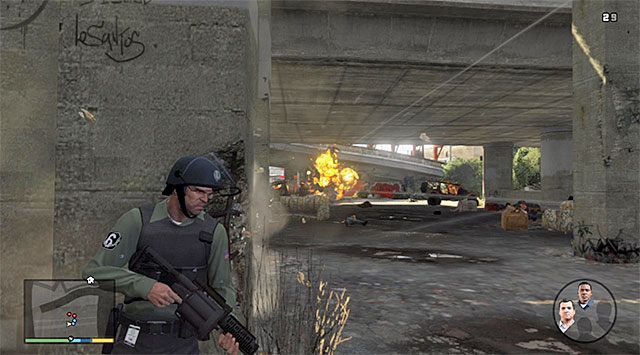 Keep blowing up the enemy cars

During the fights with the Merryweather mercenaries, you should first of all watch out for your flanks. Do not allow the enemies to attack you by surprise. Do not forget that you can also use Trevor's fury mode and Michael's slowing down of time to eliminate the enemies efficiently. You should also wait for opportunities to blow up the cars in which the enemies came. Further in this fight, you should also deal with the snipers deployed on the bridge that you can see in the distance. 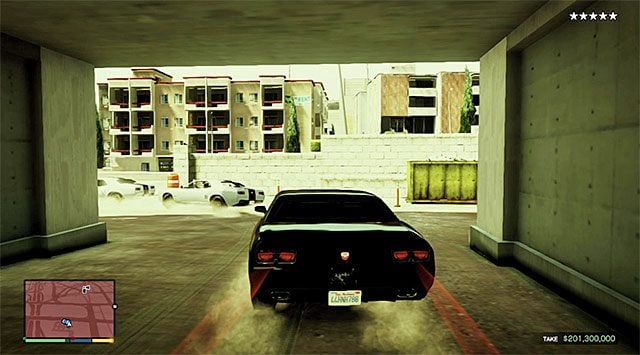 Follow Trevor's and Michael's cars and slow down time whenever necessary

After you win the fight, watch a short cutscene and after you cut to Franklin, start your escape on the cars with the stolen gold. Do not worry too much about the five-star police pursuit because, if everything goes according to the plan, nothing bad should happen. Follow the other two cars, use Franklin's special skill at moments when there is a risk of colliding with a police car, a regular car or element of the surroundings. You should also watch out while entering sharp turns and driving along tight spaces (e.g. a construction site). 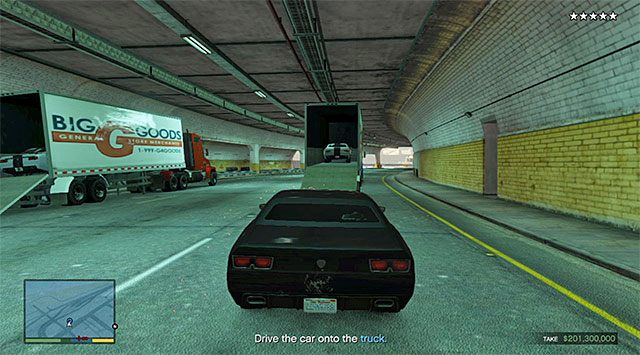 If you have followed my suggestion and invested in armor and bulletproof tires, the escape should prove to be easier, although having the upgrades mounted is not required at all to succeed. Continue driving until you reach a big tunnel. You need to drive here onto the truck on the right (shown in the screenshot, slow down time if necessary), before the truck leaves the tunnel. 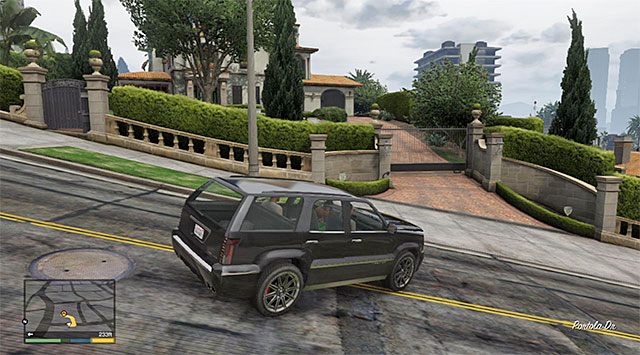 The point where the mission concludes

The final part of this mission is a formality, because you only need to return to Michael's villa, while playing as Franklin, and watch the cutscene of the meeting with Lester. Nobody will bother you anymore.