This page of the guide to Grand Theft Auto V has a walkthrough for mission 74 - The Big Score. Our GTA 5 guide explains the possible approaches to this mission and related side missions.

For the final heist, check out the walkthroughs for mission 79 (subtle variant) or mission 83 (obvious variant).

Way to unlock: You need to complete main mission 73 (Meltdown). You may now go to Trevor's strip club (letter H on the world map).

Additional information: This one is a very short mission which entirely revolves around planning another big heist. Traditionally, you will have to make a choice towards the end of this mission, concerning the variant of behavior and the make up of the team.

NOTE: Towards the end of this mission you will have to decide about the way of pulling off of the last major heist. This choice will influence both the heist itself, and the preparatory missions that you play before it. I strongly recommend that you save the game before you start this mission! 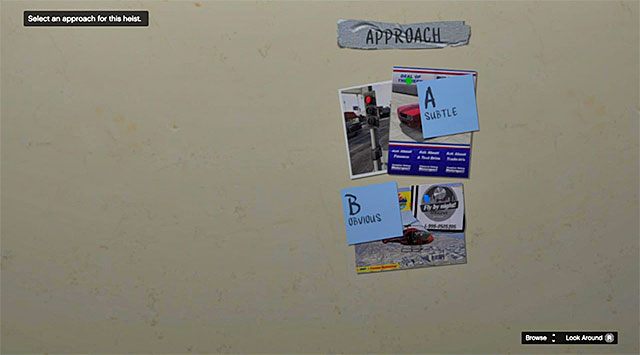 The moment of choice of the heist variant

To start this mission, you need to go to the strip club seized by Trevor, i.e. to the Strawberry district, as any of the protagonists. After you listen to a short conversation, and to Lester's speech, you will be presented with a choice of one, from among two, possible variants of behavior. The Subtle variant assumes that you seize the armored vans and make it into the vault dressed as the armed guards, which will have you hire as many as five accomplices (two gunmen, two drivers and a hacker). The Obvious variant assumes that you drill a large tunnel to the vault, and steal the gold using choppers and a railway engine, which will have you hire four accomplices (two gunmen and two drivers). In each one of the cases, there will be different preparatory missions to play and the heist itself is going to be completely different. The decision is yours and, of course, both of the variants have been described further in this walkthrough.