This page of the guide to Grand Theft Auto V has a walkthrough for mission 70 - The Wrap Up. Our GTA 5 guide explains how to get out of the trap, how to act while playing as Trevor, how to protect Dave and lose the huge police chase.

Mission 70 - The Wrap Up general information

Way to unlock: You need to complete one of the missions connected with the FIB skyscraper heist (The Bureau Raid), i.e. mission 68 (dressing up as firefighters) or mission 69 (roof entry). You can now get to the meeting place with Dave, i.e. the Kortz Center complex (letter B on the world map).

Additional information: As you can probably figure out, meeting with Dave is not going to be friendly and the entire mission will turn into a heated fire exchange, with the Agency's tams and Merryweather mercenaries to join in. The greatest surprise is going to be the joining of Trevor who decided to Help Michael and Dave to leave the Kortz Center safely.

Mission 70 - The Wrap Up full walkthrough 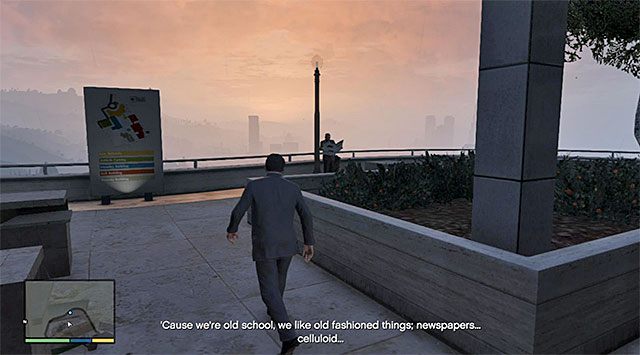 The place where you meet up with Dave

The starting point of this mission is the Kortz Center complex located to the North-west of the main part of Los Santos, and you need to get there as Michael. There is only one path leading up to the destination and, after you get there, leave your car on the parking lot. Cover the rest of the way on foot, reach the balcony above and find Dave in the South-Eastern corner. You will watch a cutscene of the conversation with Dave, Steve and Sanchez, after which there will be a massive fight to play. 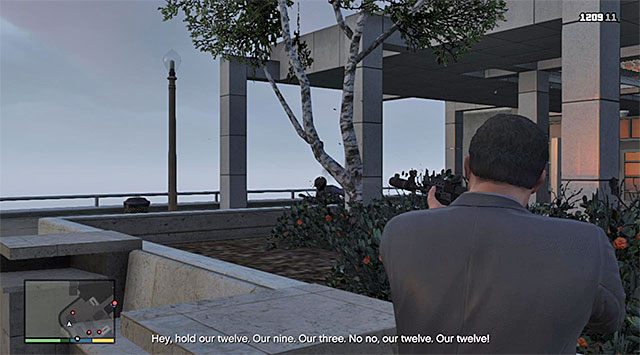 Right after the fights start, select a better weapon from the inventory (e.g. the assault rifle), start eliminating the closest enemies. During the shootout, keep using Michael's special skill on a regular basis, especially that many of the enemies are wearing heavy armors and, as a result, it is better to aim at their heads. After you have dealt with the enemies that posed the greatest threat to Michael, walk towards the yellow point marked by the game. 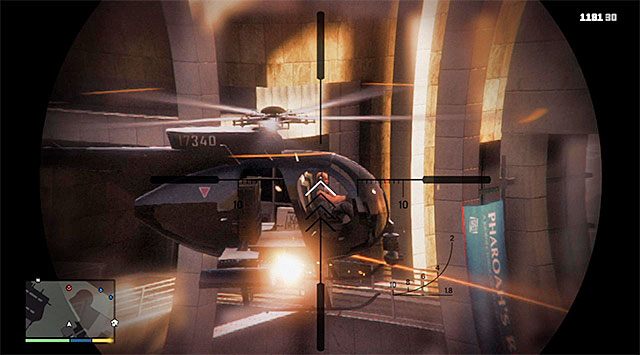 After you approach the main yard, there will appear a Merryweather chopper here, and that is when you will cut to Trevor. Use the sniper rifle and try to shoot the pilot of the chopper as quickly as possible, which will result in bringing the helicopter down (the above screenshot). 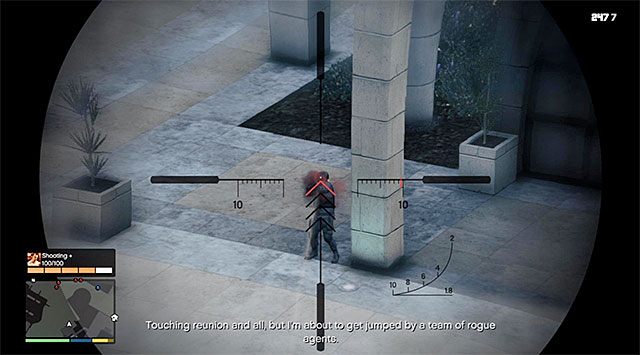 You can play as either Trevor or Michael

Continue shooting your sniper rifle and try eliminating, in the first place, the enemies that pose the greatest threat to Michael and Dave. The game will soon unlock Michael again so, you can decide for yourself if you want to attack the enemies from afar, or get involved into more direct confrontations, rely on slowing down of time. Trevor does not need to move from his position, whereas Michael needs to reach the main yard. 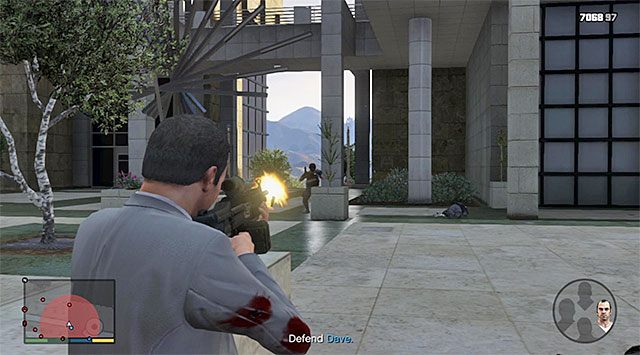 Cover Dave, who is hiding near the fountain

Around, there will soon appear a Merryweather chopper and, just like earlier, it would be a good idea to get rid of it by using Trevor's sniper rifle, or on slowing down of time by Michael. After Michael reaches Dave, start covering the colleague from the Agency. You should first try eliminating those of the enemies that are the closest, and also pay attention to the fact that there appeared another Merryweather chopper here. 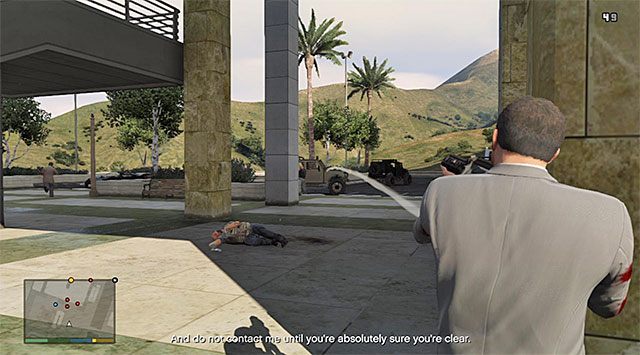 After you have cleared the area, cut to Michael and follow Dave. Do not attempt to leave the area as soon as possible, because you will be surprised by another group of Merryweather mercenaries on the parking lot, in front of the complex. Make use of pillars and the other objects in the surroundings to hide behind. It also pays off to use the grenade launcher or explosives to your advantage, to blow up the cars with the enemies positioned at. 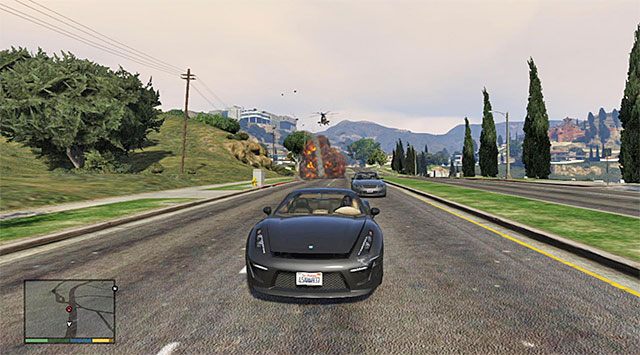 The last one of the Merryweather choppers

After you are done, break into one of the vehicles in the parking lot and start escaping. There will be one more, the last one, chopper to follow Michael and, if you want to complete this mission in 100%, you need to destroy the helicopter. You can do it by getting out of the car and use the rocket launcher, or a scoped rifle, to knock the machine off the skies, or reach the city as quickly as possible, in hope that the chopper will crash while maneuvering among buildings. Regardless of your variant of behavior, you ultimately need to reach the Morningwood district to meet up with Trevor.

Rewards and challenges in mission 70 - The Wrap Up