This page of the guide to Grand Theft Auto V has a walkthrough for mission 69 - The Bureau Raid - the roof entry variant. Our GTA 5 guide informs how to land on the FIB's skyscraper, how to complete all hacking mini-games, how to eliminate the agents, and how to escape after completing all the objectives.

The fire crew variant is described on a separate page.

Way to unlock: You need to complete main mission 65 (Architect's Plans ) and choose the Roof Entry variant towards the end of that mission. Wait until you receive a message from Lester and return to the clothes factory, i.e. the headquarters (letter H on the world map).

Additional information: The variant which assumes gaining entry to the FIB skyscraper from the roof, and it assumes fighting more fights than in the case of infiltrating the building dressed up as a fireman. You are going to encounter the first wave of enemies right after you break into the server room, and this is going to be a chain of fights lasting until the very end of this mission. When it comes to the theft of evidence from the server room, there are several interesting mini-games connected with it, which, contrary to what it may seem, you may find a little bit problematic. 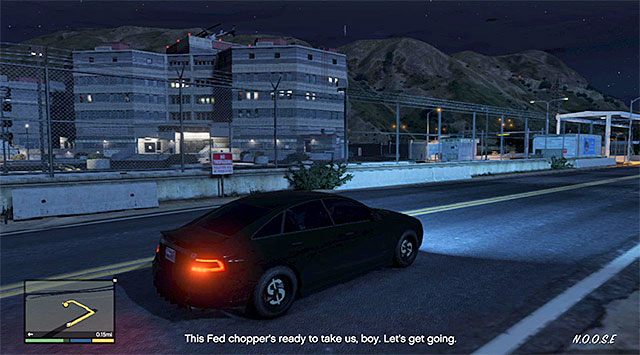 You kick off as Michael. Exit the clothes factory, get into your car (Obey Tailgater) and drive towards the government agency located to the West of Los Santos. There is only one way to your destination and you will be automatically granted access to the facility. Park your car in the marked spot and watch the cutscene. 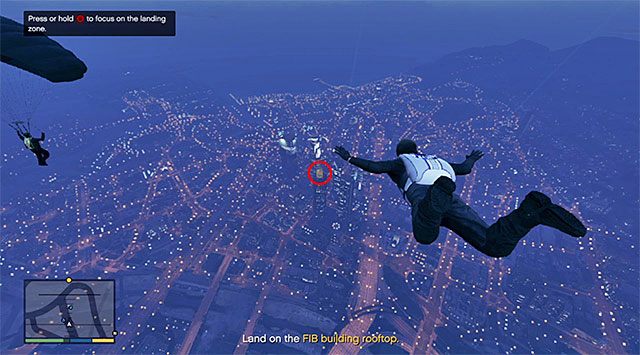 After you regain control over Michael, get into the chopper (Maverick) and fly it to the West. You need to start ascending and fly towards the yellow circle. Watch a short cutscene here, bounce off and start the freefall. After several tens of seconds, open the parachute and try to approach the FIB skyscraper rooftop shown in the screenshot. Try to land inside the big yellow circle and use the option to target the rooftop, if necessary, as well as slowing down of time, by pressing and holding down both of the buttons, to slow down the fall. 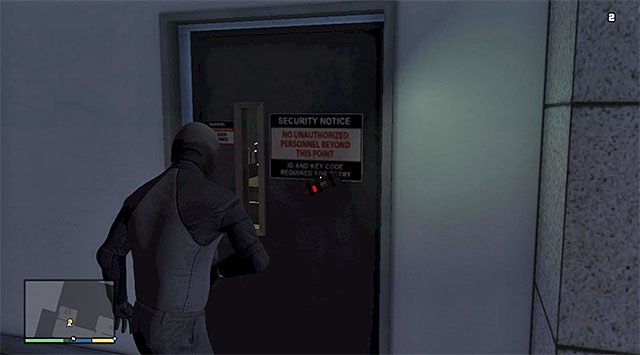 Wait for the team members to gain access inside the skyscraper. Select the sticky bomb from the inventory, target the server room door shown in the screenshot and detonate the explosive from afar. Quickly enter through the door, because this will start the alarm in the FIB headquarters. 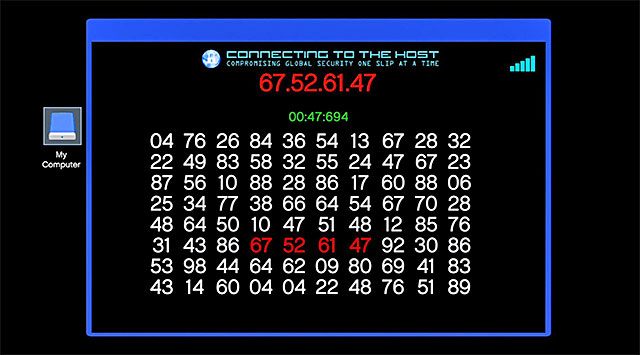 Now, you are going to play several mini-games, whose aim will be to break into the terminal. Start by selecting the My Computer icon, and then the external drive J:. Start by accessing the HackConnect.exe app. Your task is to locate the IP address identical to the one displayed at the top of the screen. Fortunately, even f you deplete the number of available attempts, or the time limit, you will be able to start again, with a different address. 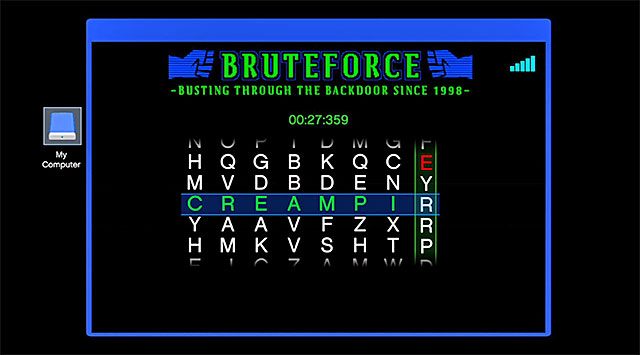 Select the consecutive red letters to complete the password

Now, start the BruteForce.exe app. The rules of this game are obvious, because you need to press the appropriate button on the gamepad each time the red letter is in the blue frame. If you press the button with a wrong letter selected, the process starts over again. After you complete this mini-game, access the Down&Out.exe, program, which will initiate a two-minute-long data downloading process. 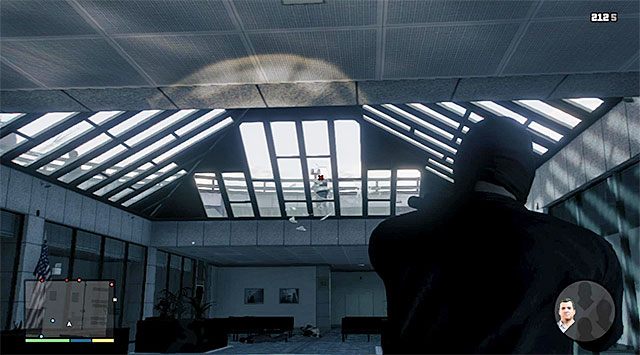 As you can probably figure out, you will now have to defend yourself here, until the data downloading process is completed. Depending on your preferences, you can play as either Michael or Franklin. In both cases, remember to make an extensive use of the covers and watch out for the enemies appearing on the glass roof, while trying to deal with them as quickly as possible. In dire straits, conduct blind fire and use the grenade launcher or explosives. 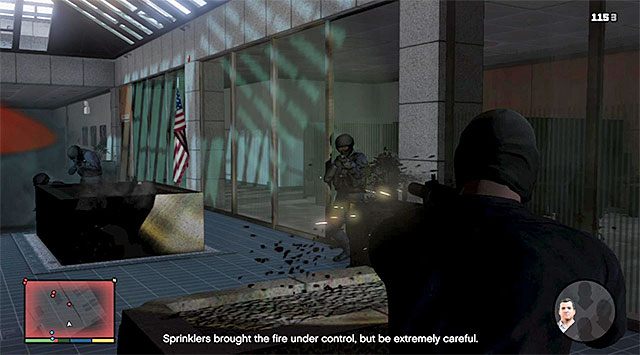 Watch out for the enemies wearing helmets and bulletproof vests

The action plan will soon change because the chopper, which you had to use to evacuate, will be shot with a rocket (unfortunately, you cannot in any way prevent that because the chopper is piloted by a person from outside of the group of the hired accomplices). Keep firing your defensive actions and be careful after the enemies use a smoke grenade. Do not allow the enemies to come close to the spot where you are defending, and consider using better weapons than the startup ones. This is so, because you will need to deal with enemies wearing heavy armors. 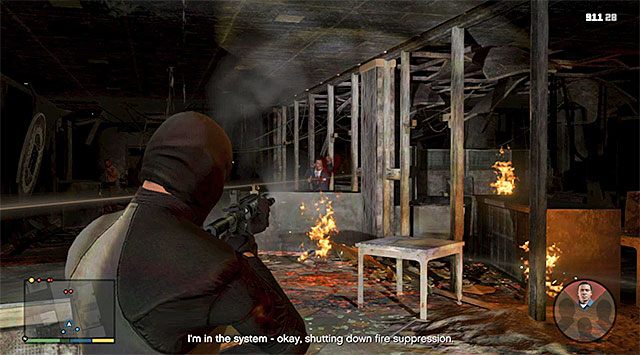 Try not to kill civilians

After the data downloading process is over, collect the drive with the copied data and follow your allies, while playing as any character of your choice. Soon, you will bump into two enemies and, because they appear right next to you, it is better to eliminate them in melee combat. Climb down the stairs to floor 52 and lay fire down on the enemy at the other side of the door. Start walking now through the blazing offices, while eliminating the armed Agency employees. Do not attack the armless civilians though, because this would render you unable to complete this mission in 100%. 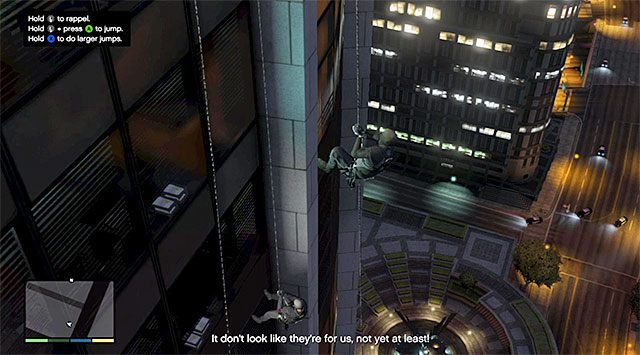 Keep bouncing off the skyscraper's wall

Ignore the destroyed chopper and make it through to the lower level. Also here, attack only those of the people who use firearms. Climb down the stairs to reach the lower level and reach the place where you can attach the abseil sling. Start sliding down the building's wall. During this action, it is a good idea to bounce off the skyscraper's wall on a regular basis to perform long jump and speed up the process as a result. 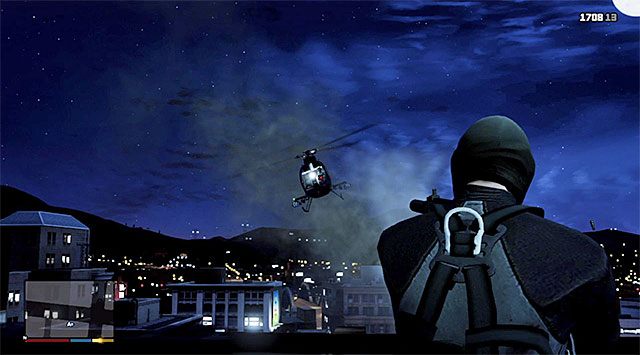 After you reach the external balcony, cut to Michael and use the time-slowing skill to eliminate the pilot of the chopper shown in the above screenshot. While doing that, try to conduct your fire from behind a cover. After you are done, locate a new point to attach your sling and complete the slide down the wall. To reach the yard in front of the FIB headquarters. Hide here behind one of the posts and eliminate the last enemies in this area. 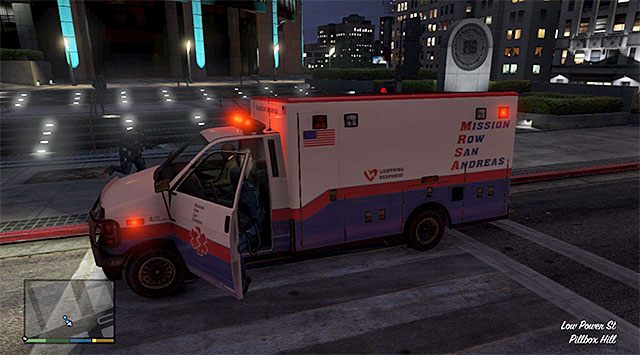 Get into the ambulance and drive away from the skyscraper

If you have hired a good driver for this job, he will drive up to the building in an ambulance, and you will not need to play through a chase scene. Get into the ambulance and drive away from the site. The only thing left for you to do now is reach safely Franklin's estate in the Vinewood Hills.