This section of the Grand Theft Auto V game guide describes the meaning of choices made when planning heists. You'll learn when to select a type of a given heist in GTA 5 and what are the differences depending on who you hire for the job. 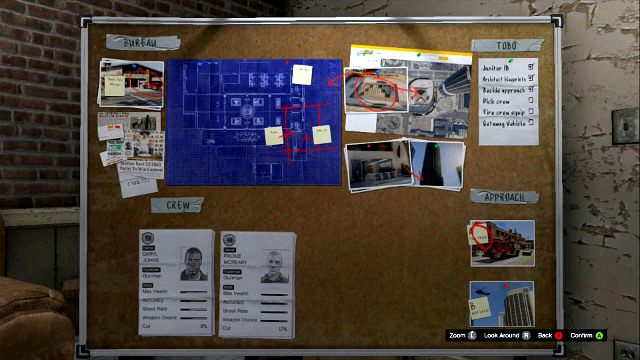 Choice of approach and crew takes place during planning the robbery

In the game, you have six big robberies to perform, which are connected with a solid amount of cash. Preparing to each mission, you can choice between two ways of making the. You should choose the one which better suits your preferences. You'll be informed what you have to do and make a choice basing on that knowledge, so if you don't like flying, choose a plan without the helicopter. Depending on your choice, you'll have to also take care about proper equipment, to make mission possible - mostly, it's all about stealing a car.

The other important factor is a choice of crew. There are three basic categories of companions: driver, hacker and a shooter, but not every robbery requires all of them. Each of them will want his part of the looted goods. The better his skills, the more he will demand, but the mission will be easier.

Cheap crew will make the mission harder and, sometimes, not everyone will make it out in one piece (but you still have to spend his part of money). After all, cheap crew is better from the financial point of view, because you'll keep the majority of money. What is more, companions increased permanently their skills during actions and keep their low financial demands. It means that choosing hacker Rick to The Jewel Store Rob will give you a little of time for emptying the cases during the robbery - but at the next mission, his skills will be similar to the ones of the best hacker and he keeps his low financial demand of 4% part. If you feel okay for a challenge, the cheapest crew will be the most profitable. But if you want a bit of confidence, you can hire one veteran.

You will have to choose between tricky and noisy variants. The mission doesn't change due to this choice, but you'll probably deal better with the tricky one as you'll be able to spend all the time the hacker gives you for emptying cases instead of dealing with people in there. To this mission you need a three-man crew:

This robbery, as it turns out after making it, won't give you any money. Also, you don't have to collect a crew. You can approach it by attacking the freighter from the sea or using the helicopter. Choice doesn't matter in this case. In the first option, you'll have to deal with the ship service , the other one includes a lot of flying and firing at the chasing helicopters, what not for all is funny.

As in the case of Merryweather, this robbery is also without the crew. You can't also choose an approach.

Robbing the Paleto Bank is, again, without the choice of approach. But you can choose one of gunmen. Choosing the cheapest option is connected with the companion's death (remember that you have to pay him, even if he dies). The other ones (Packie, Chef, Montoya) won't get hurt. In this mission, it's better to invest in better crewman, because you'll separate in some moment and he'll try to slow down attackers from NOOSE single-handedly.

This robber may be played in two ways. You can infiltrate the building, plant bombs and drive there as a fire brigade. The other way is to attack directly from the air, landing on the roof with parachutes. First option seems to be easier: you mainly walk, run and fire a little, but you have to hurry due to limited amount of oxygen. And because of the smaller crew, you'll earn more. Choice of crew depends on the way of robbing you chose:

The last big robbery may be played in obvious or subtle way. The first option is way more difficult, but may give you much better financial output than the other one.