This section of the Grand Theft Auto V game guide describes Chop -a rottweiler you can befriend as Franklin. You'll learn when you can take care of Chop in GTA 5, how to teach the dog some new tricks, and how developing its skills affects the game. 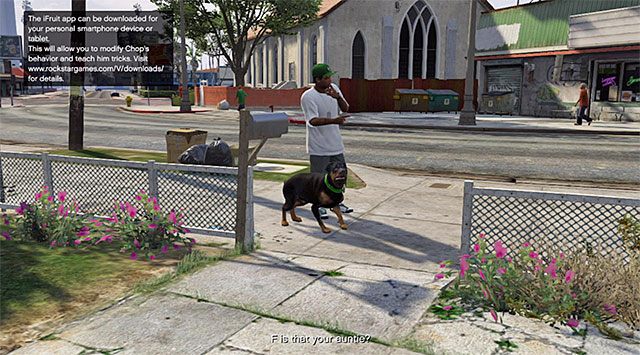 Chop is a Rottweiler belonging to Lamar, i.e. a close friend to Franklin. This nice little doggy appears for the first time during the fourth main mission, and already then Franklin can, to some extent, influence his actions, by summoning him during that mission. The matter of making friends with the dog, and training him, comes into full spin only after you complete the fourth mission. You need to wait until you receive a message from Lamar, which concerns taking over the custody over Chop (temporarily, of course). 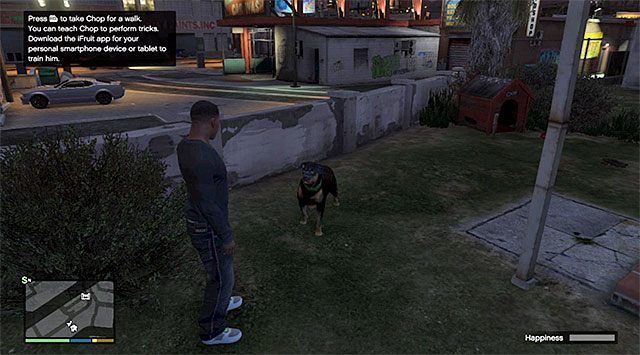 After you return home, you can find Chop at the Franklin's home's backyard, i.e. in the kennel erected there for him. The easiest way to improve on Chop's happiness is walking him frequently around the vicinity. Of course, the walk is not the only available option, because you can also teach the dog various tricks. Initially, the only available one is throwing him a ball, so that Chop can fetch it, although, with time, new forms of activity become unlocked.

If you have an IFruit application, you can additionally play with your dog and teach him new tricks and unlock new in-game possibilities. The fun with this application is similar to Tamagotchi. You have to feed Chop, play with him, take him for walks and play in minigames. It will improve dog's abilities and helps in looking for collectibles, because Chop will automatically point place where you can find one. In this application, you can also change the dog-collar color.

For the time of writing this guide, application is available only for iOS, but it should be released soon on Androids also. To use it, you need a Rockstar Social Club account linked with Xbox Live/Playstation Network with GTA.