This section of the Grand Theft Auto V game guide describes playable characters' main skill types. We also provide tips on how to develop them in GTA 5. 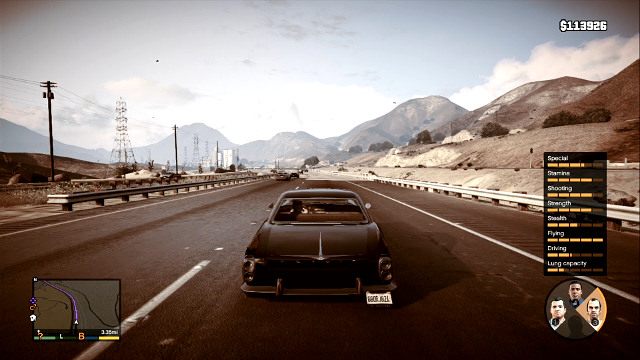 Statistics can be found in the character choosing window

When you play as a particular character, you upgrade his skills by making actions. When you repeat that action sufficient amount of times, the character gets additional point to the trait. Remember, that you develop only the character you're playing in the very moment, not all three of them at once.

Special - defines how long your special ability can be active. The more you use it, the faster it's developed and the longer you can use it. Special is separate for every character:

Stamina - let you run, swim and drive a bike longer. Increased by any of those activities.

Shooting - decreases the recoil, increases a clip size and speeds up reloading. Increased by firing at enemies and completing challenges on the shooting range.

Strength - defines damage dealt in melee, tennis and golf skills and reduces damage received from explosions, falls and knocks down by the car. Increased by melee fighting, golf and tennis.

Stealth - increases a speed of moving and decrease an amount of noise produced while sneaking. Increased by stealth and elimination of enemies. To switch into stealth mode, press L3.

Flying - increases the agility of the plane and decreases the wind effect. Increased by flying and attending to the flight school.

Lung Capacity - determines how long you character can stay under the water. Upgraded by diving.