This section of the Grand Theft Auto V game guide describes the stock market. We explain the basic steps and advise how to become a multimillionaire in GTA 5 by making the right decisions, namely manipulating the market and purchasing shares when it's the most profitable.

Basic information on the stock market in Grand Theft Auto 5 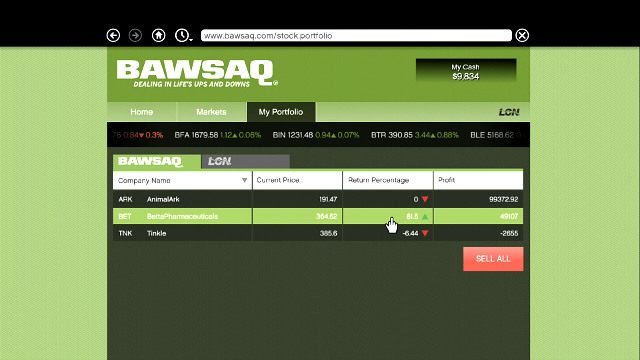 You get an access to the Stock Exchange via the Internet

The Stock Exchange in GTA works like the real one. You buy shares the cheapest you can and then try to sell them at the biggest price you can get. In-game Stock has two indexes: in-game and depending on your actions, LCN, and BAWSAQ, which is affected by all players through the Rockstar Social Club. Notice, that BAWSAQ requires an Internet connection to your console.

BAWSAQ is much more unpredictable due to its way of working, but you can, in general, assume that if something starts rising, it will going up and up as the players start noticing the fact and buy this particular shares. Of course, you have to control the situation and observe the price, because at the certain moment it may start dropping.

As of LCN, it's very easy to control and get huge amounts of $ from it. Actions go up or down, depending on the performed actions. Information about it may be found in various dialogues and radio. When you're prepared you can achieve a lot of incomes. Remember also, that each character has separate shares, so if any goes up, buy them for all three of them.

While playing, you can notice a general tendency of rises and slumps. Watch the charts. If any company increases its value and then slumped, it's a pretty good chance, that it'll rise again. In general, you shouldn't keep shares for too long, as the market is very fragile and may change totally in few dozens of minutes. You shouldn't also invest all money, and those invested split for few companies in which you believe will rise up. 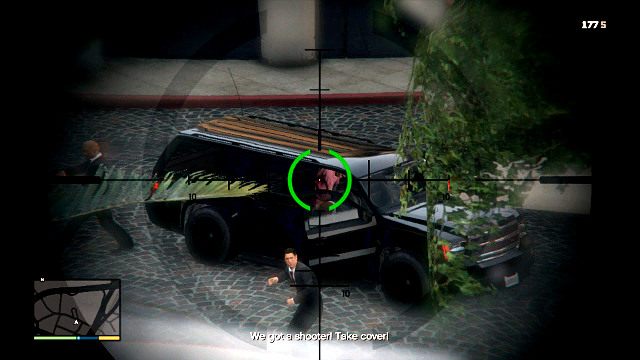 You can manipulate the shares mostly thanks to secondary missions of Franklin for made for Lester. Lester will order you to kill particular heads of corporations, whose deaths will increase shares of their rivals. Before you begin such a mission, it's worth to have accumulated a lot of money in order to get even more. Buy shares for all characters before you begin the mission , because when you begin, you won't be able to change the character. After the mission is done, the shares should rise in within ten hours. Then sell them, Be careful not to keep them too long, because the price will start stabilizing after some time.

Here is detailed list of shares you should buy:

If you want, you can buy also shares of the sabotaged company, when they are the cheapest. For example, at Multi-target Assassination up will go Debonaire shares and down Redwood shares. When you sell Debonaire, you can buy Redwood very cheaply. In two days their price also returns to normal. Then, you can buy it for the double profit.

Aside of the Lester mission, you can also manipulate the Stock manually, by buying particular shares and destroying properties of the rival company. Here you can see the companies linked with their rivals:

Destroying properties of one of the companies listed above, pumps up the shares of the rival. You can, for example, buy FlyUS shares and then head for the airport and destroy everything marked with AirEmu logo. As in the case of Lester missions, you can also buy the AirEmu shares when they are cheap and hope their price will rise again.