This section of the Grand Theft Auto V game guide describes the best ideas for getting rich. We explain how to become a millionaire in GTA 5, also by doing heists and investing in the stock market.

You start Grand Theft Auto V with little to no money making your purchase options very limited. However, there are a few ways to quickly add several zeroes to your account. 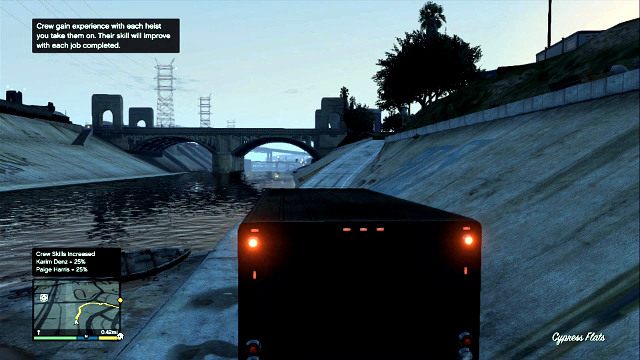 The most obvious way to get extra cash, is to start robbing. Every time you collect your team, you can choose between several candidates, who's skills differ a lot. The better skills, the less complications during the mission, but also the more money you have to put on the table.

But it should be noted, that worse candidates will develop their skill with every robbery but, simultaneously, they keep their low financial demands. So the most economically, is to choose the cheapest companions. Missions will be, in general, more complicated, but you shouldn't feel that too much. For example, during the first robbery, when you choose the weakest driver, you won't obtain instructions where to drive to, worse motorcycles in the sewers and small stop after that, but you should make it. The worst shooter will make him crush and lose money, but you'll collect them as Franklin, so there is no lose. Choosing the IT man defines how much time you have for looting all cases and it's the only crew member at who you shouldn't spare money, because he decides how much cash you'll get from the robbery.

At the next robberies, you can use the same companions and they should be better. But you have to decide by yourself, if you're ready for bigger challenge - if yes, you'll increase your income greatly. 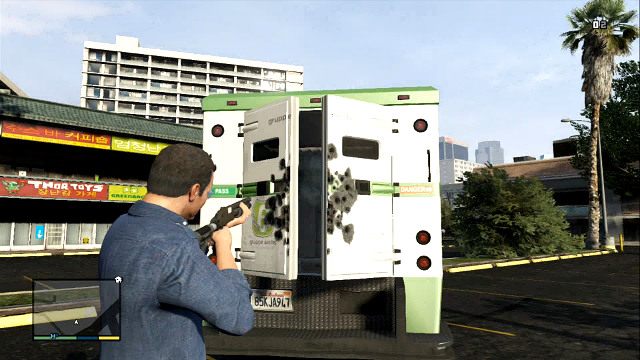 Fire at the lock to open the van

While wandering around, you should run into armored vans, which have a lot of money inside. Depending on the reaction time, you can eliminate bodyguards before or after they got into the van. But if they detect you, they'll run away and you'll have to begin the chase.

When you take over the vehicle, you have to open the back door. You can use, for example, a Sticky Bomb, but the shotgun will also make it. Aim at the lock, in the very middle of the door. When you open it, you get cash. Its amount is variable, but it should be about five-six thousands. Also, beware of police, because you'll have 2-star Wanted level. So, firstly get rid of it and then collect the cash.

As every standard criminal, you can also get into the shop and steal all money from its owner. It won't be large amounts, but few additional dollars should get into your wallet.

When you enter the shop, aim at the owner and he begins to unload the cash. Sometimes, he may have a shotgun, hidden under the counter, so you have to kill him first and then open the cash, by firing at it. If so, look around - there may be other cash also.

Naturally, after that you'll have a police on your tail, so you should have a prepared car in the front of the shop or, at least, a place where you can hide.

You can steal from gas stations, supermarkets and liquor shops. You can't steal from clothing shops and Ammu-Nation, where you can take out your gun.

Playing on the Stock Exchange, may give you a powerful amount of dollars, if you know which shares to choose. In the game, you will hear about growths and falls which may happen, so listen to them carefully (if you don't hear clearly, you can always check it in the options) and then buy proper shares.

The biggest vein of gold is Franklin, while he performs kills on company presidents for Lester. So before you begin mission, invest in corporation, opposite to at which you attack (repeat for all three kills). More detailed information in chapter about the Stock Exchange. 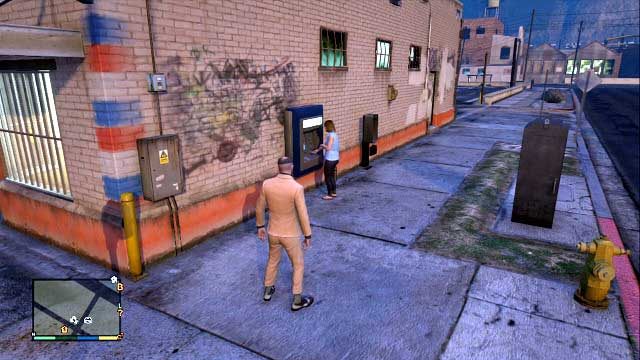 People using ATMs should have some money with them

You can also earn money from secondary missions, events, activities and buying companies. Take part in races, steal taxi and become a taxi-driver, catch thieves, find collectibles (remember to take Chop with you) or, simply, attack people on the street and take them money. In the latter case, you should interest in people at ATMs, because they should have more money than the random persons. It won't be great amount of cash (dozens, sometimes few hundreds of dollars), but it's something at the beginning of the game. At the end: remember, that the easiest way to get money, is to save them. Don't buy weapon - get it from someone. Don't buy a car, steal it. Spend money only on the very necessities. Additionally, you can also get a 15% discount in Ammu-Nation - you have to complete all challenges on the shooting range. If you complete all of them with gold medal, discount grows to 25%.