This section of Grand Theft Auto V includes tips and information on how to choose characters' gear. Among other things, you'll learn about the best weapons, ammunition, accessories, and armor in GTA 5. All these items make it easier to win fights and keeping the controlled character alive.

You should remember and take care about your equipment during the whole game. There are Ammu-Nation shops spread out in San Andreas - there, you can buy weapons and armors. In general, buying weapons will be an overextended effort and a waste of money, because you find it anyway at bodies, so don't rush with that.

But there are some exceptions, like when you are caught by the police and you have nothing in hand. In this case, you should buy any shotgun, which eliminates most of enemies with a single shot.

Pay an attention also to the dialogues which take place before missions, because you'll often obtain hints, like "consider usage of sniper rifle or sticky bomb". If you hear something like that, it's best to buy the suggested weapon if you don't have one. It should make missions easier, otherwise you'll be forced to improvise and the game will become harder. You can also take information about free weapons which you can take from the shop from dialogues, messages, in-game information (e.g. rockstar social club), so remember to notice such things.

At the end: remember, that if you have several weapons of the same type (pistols, shotguns), game will automatically chooses the first model (in general : the weakest one). In this situation, remember to change weapon manually. Open the wheel of choice (LB/L1), choose the type of weapon and the switch between particular models with left and right direction button. Notice, that you have to repeat it with every change of character. 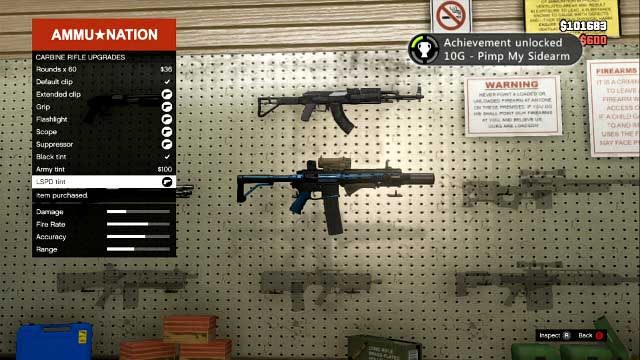 You should but upgrades to your weapons

If you can omit buying the weapons themselves, you should remember to buy ammunition and upgrades for the weapons you currently have. Those, which you can buy, vary depending on the particular weapon, but, in general, most of them can have a silencer, a flashlight, increased size of clip or decreased recoil. In general, every upgrade is useful and you should buy all of them, if you can. The only exception is change of your weapon colors, which is a purely cosmetic tool and doesn't affect the game. About the weapons itself - you should focus on rifles (away enemies) and shotguns (close enemies), so those ones should be upgraded firstly. You should also always have several grenades or Sticky Bombs at hand, which may be useful under the heavy fire. But, in general, remaining explosives are rather something to break the boredom than a real help in encounters. You'll find them during missions, so you'll see how they work in action. 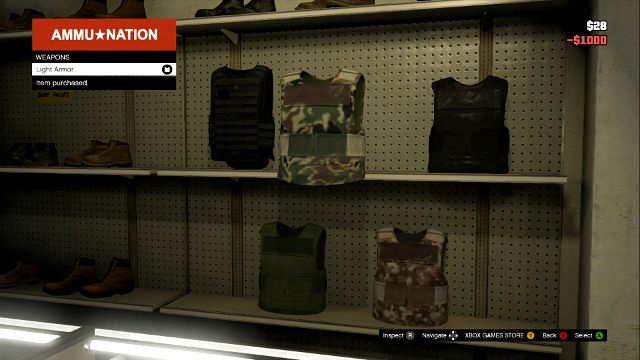 Armors protect you against bullets

Additionally, you can also buy armor and, later on, a parachute in A-N. Parachute will be useful, rather, from time to time than often. Due to the complicated procedure of flying in GTA, you should take one before any aerial travel, but, on the other side, when you're doing an aerial mission, destroying your plane means, in general, a failure. Because of that, parachute will be useful only when you decide to go flying on yourself.

On the other hand, you should buy armor before every major mission. Armors in GTA elongates your health bar. Every shot (only shot, armors don't protect you against explosions or falls), which you get, decreases the armor bar and then the health bar. So, it's an additional protection which you should have in case of any serious action.

Type of the armor determines the protection. There is no way in saving money, so you should invest in the most expensive armor for 2,500$. At the beginning, it may be a problematic amount, but after a jeweler robbery, you should be able to buy a new armor every now and then. So remember to visit Ammu-Nation when you see one.