This page of the guide to Grand Theft Auto V has a walkthrough for mission 56 - Monkey Business. Our GTA 5 guide explains how to use the underwater entrance to the base, where to find the toxin, how to get out of the building and use the helicopter to transport the cargo.

Way to unlock: You need to complete Main mission 55 (derailed). You can now go to the meeting with Steve and Dave, which is to take place on the beach in the North-eastern part of the county (letter B on the world map).

Additional information: This one is a quite long mission, which consists of three parts. The first part assumes playing a diver and its aim is to make it inside a research facility. The second part is about stealing the toxin and it allows you to act in shadows. The this part is about making it out of the building with the toxin and transporting it on the chopper. In this case, you will be taking part in direct fights with the enemy. 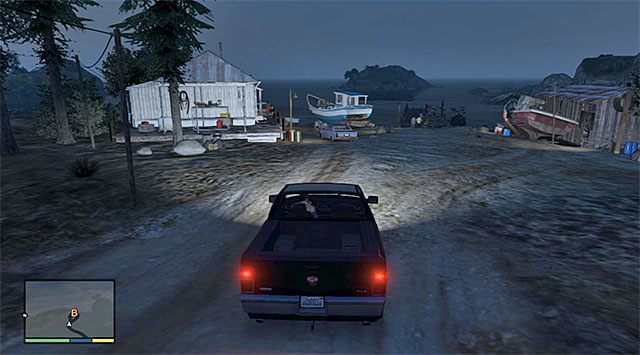 The starting point for this mission are the vicinities of a small fisherman's cabin on the beach in the North-Western part of the map, and you can reach here as any of the three playable characters. Listen to a long conversation with Steve and Dave, after which you will cut to Michael. Get into the boat (Nagasaki Dinghy) and steer it towards the point marked at water, exactly to the East of the research facility. 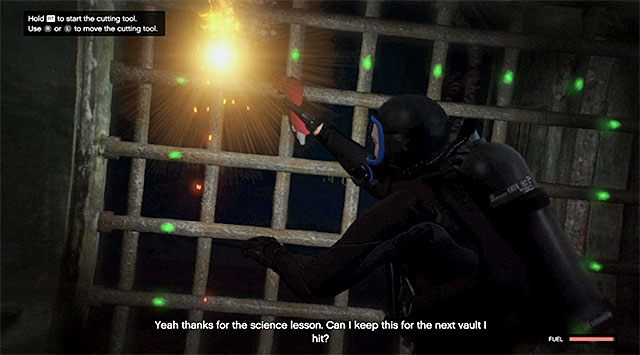 Press the appropriate button on the game pad to dive and follow your "colleagues" of the FIB. Ultimately, you need to reach the small cave, with a grate securing the entrance to the facility. Wait for Michael to produce a blowtorch from the inventory and start cutting though the bars in the spots marked in green. Follow the instruction and do not use up too much fuel, because you may run out of it prematurely, which will result in failing the mission. 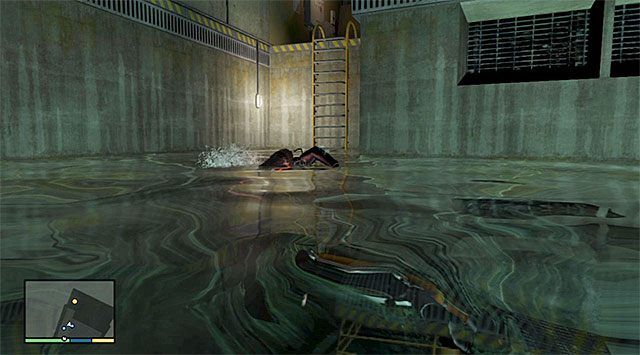 Continue using the blowtorch for cutting through the green points, which will result in unlocking access to the net of underwater tunnels. Follow Steve and Dave again on a pretty long swim, during which you will, fortunately, not need to deal with any additional safety measures. After you reach a larger area, resurface and take the ladder. At the same time, make sure that you have selected the stun gun from your inventory. 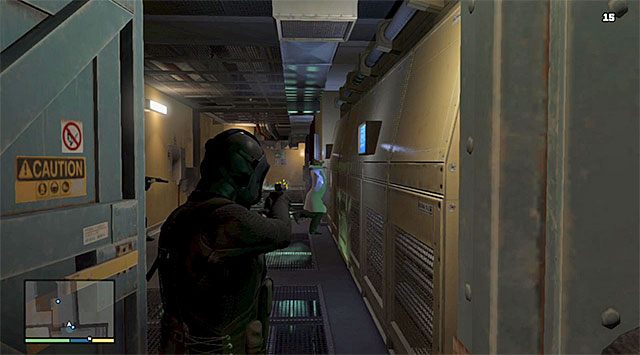 Keep using the stun gun on the people you encounter

Right after you open the door, use the stun gun to electrocute the first one of the scientists. Go straight ahead and eliminate the guard in the same way. Note - while using the stun gun, you need to be accurate about shooting, because it takes several seconds after each shot to recharge and, in the meantime, you could be attacked or cause the alarm to be raised. You can, of course, use the time-slowing skill to your advantage, although, in the case of Michael, this is best left for the final part of this mission. 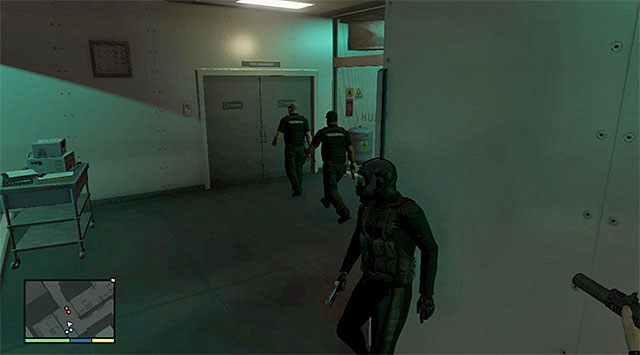 You can either hide r eliminate the patrolmen

Be prepared to take out the second scientist, who will reach here on the elevator. After you do, take his access card, enter the elevator and wait for it to take all three of you to another floor of the research facility. Soon, you will reach a room with two scientists. Attack one of them and, right after the stun gun recharges, deal with his colleague who, in the meantime, should not raise the alarm (you can also run up to him and attack him with fists). Keep going ahead, listen to the warning about the approaching patrol, after a moment. I recommend that you hide behind the wall on the right and wait for the guards to leave this area, although, you could also eliminate them too (for obvious reasons, this is going to be more risky). 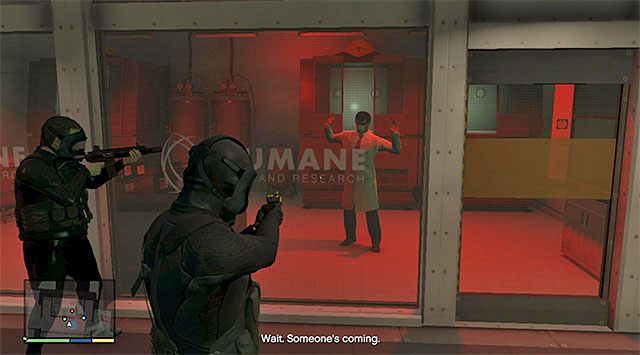 The room with the toxin in it

After you reach the coolroom's entrance, use the access card that you have just obtained to unlock the passage. Approach the room with a single scientist in it and, after you listen to a heated exchange, use the stun gun on his colleague that appears on the left. After the scientist unlocks access to the locked room, use the stun gun on him also. You can now approach the piece of equipment where the toxin is stored, which will result in the alarm being raised in the facility. Leave this room and follow the remaining members of your team. 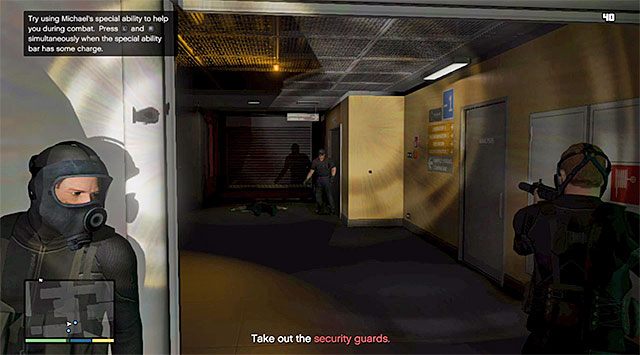 Use covers and eliminate one guard after another

Along your way towards the exit, you will be bumping into new guards on a regular basis. At first, it is a good idea to hide behind covers often, and use the stun gun on them. This is so, because for the completion of this mission in 100%, it is required that you eliminate, at least, eight enemies using that weapon. Only after you meet this requirement, switch to a firearm and start taking up more risky actions, while using the time-slowing skill to your aid. 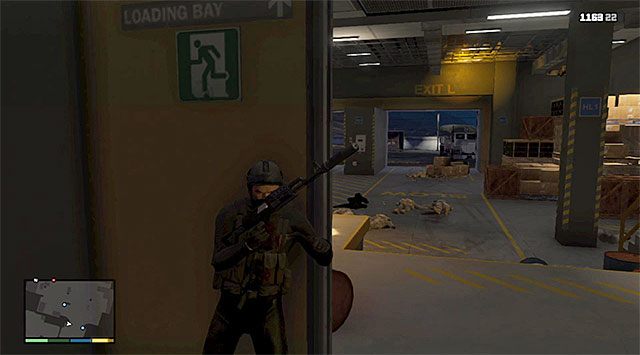 Watch out for the soldiers who guard the building's exit

You need to watch out especially after you reach the region of the facility's exit, because you will meet here soldiers, who come equipped better. I definitely recommend that you rely on the covers in this area and the time-slowing skill. Try to clear all the region of the enemy units. Make your way into the yard in front of the building and run up towards the refrigerating unit to put there the recently-obtained toxin. 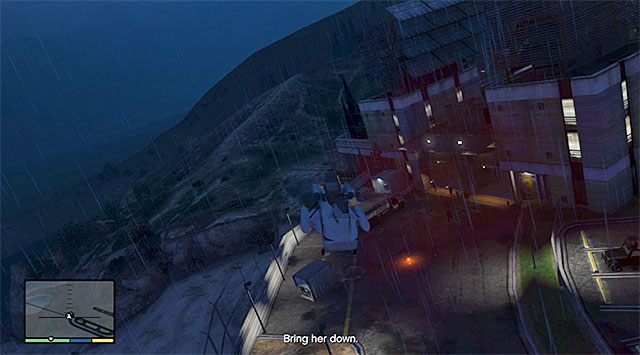 You will soon cut to Trevor, who is piloting the cargo helicopter (Cargobob). Fly towards the research facility and do not worry, because entering its airspace will not result in a new pursuit. Hover with the chopper over the refrigerating unit, which will result in a cutscene, of the hooking up of the cargo, being played. Fly with the cargo towards the airport in Sandy Shores, and remember that you need to maintain the right altitude to prevent bumping into any of the elevations in this area. After you reach the airport, hover over the truck, release the cargo and land the helicopter. 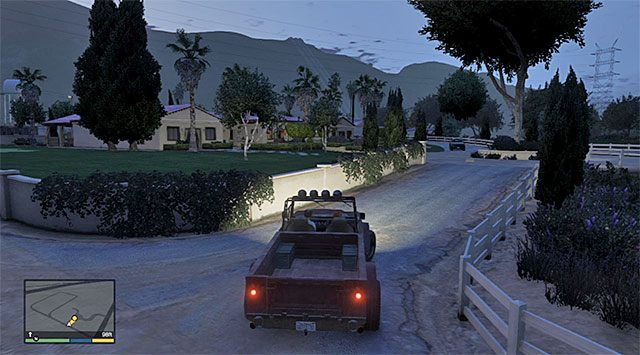 The final part of this mission is a pure formality because, still playing as Trevor, you will need to take the previously-abducted Patricia back to Martin Madrazo's farm. Just to remind you, the farm is located to the North of Los Santos.