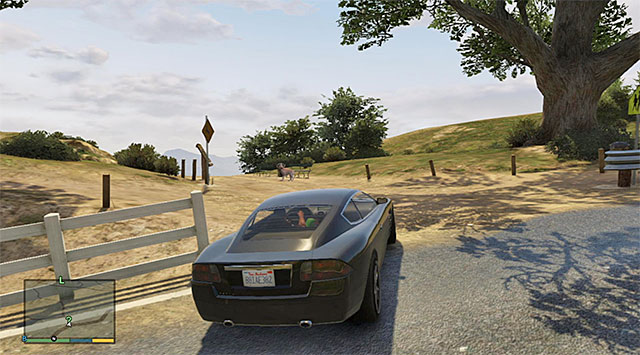 Location: You need to reach the Vinewood Hills, located to the North of Los Santos. At one of the asphalt roads, you should notice the dog shown in the screenshot. Stop your car and follow the dog. The animal will take you to the place there is a skydiver who was most unfortunate with his landing. Free Dom to learn that he is a lover of extreme sports and to receive an invitation to one such event. Follow Dom and stop where you will notice a chopper summoned by him. Take your seat onboard the helicopter. 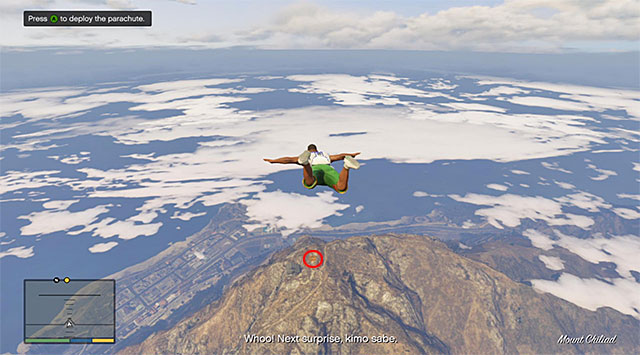 Depending on which you prefer, you can either listen to the full conversation with Dom, or speed up the flight to Mount Chiliad. After you are above the mountain, press the appropriate button to jump out and start your way down. Of course, you do not need to open the parachute straight away, and wait until you are closer to the mountain. Also, you are not required to aim at the landing site shown in the above screenshot but, if you land too far away from the yellow circle, it will turn out that you need to take a stroll which, due to the topographical nature of this area, may turn out to be very arduous. Note - it is a good idea to press, and hold down, the button that targets the landing site automatically, thanks to which it will be easier for you to land properly. 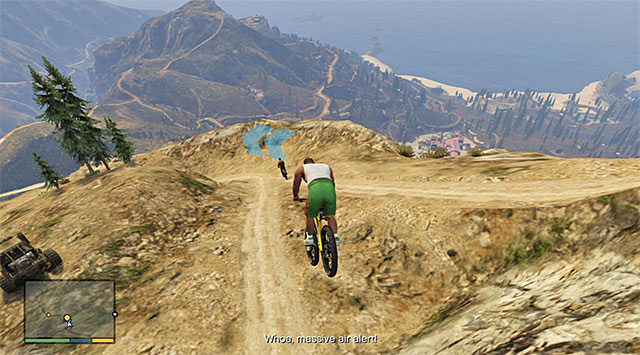 Wait for Dom to land also and approach the nearby mountain bikes. Mount any of the bikes and ride down the slope. Try not to slow down anywhere along your ride and, at the same time, watch out for possible steepness of the ground because, a bad move may result in a crash and/or failing the race. This is not to say that you need to avoid getting out of the track entirely. I recommend that you experiment here, especially that one of the additional challenges in this mission is performing a long jump on the bike. 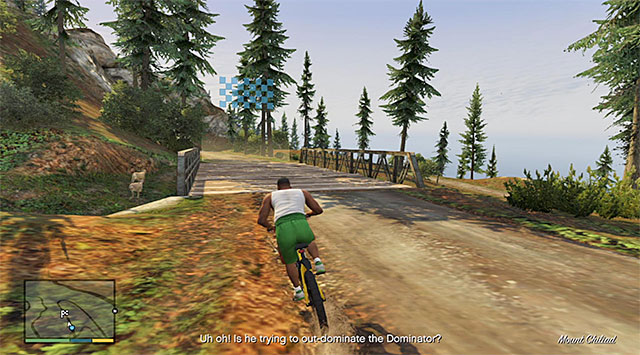 This mission will end as soon as you reach the finishing line located in the woods, at the foot of Mount Chiliad. Dom should slow down a little before the finishing line so, do not worry if you have lagged behind throughout the entire race, because you should be able to overtake him towards the end.