This page of the guide to Grand Theft Auto V has a walkthrough for mission 54 - The Paleto Score. Our GTA 5 guide has step-by-step information on how to complete the heist, how to deal with the police, use the bulldozer and escape.

Way to unlock: you need to complete missions 52 (Military Gear) and 53 (Predator). Wait for a phone call from Lester and go to the meth lab. (letter B on the world map).

Additional information: The heist on the bank in a small seaside town, will turn out to be more complicated than it could seem because, apart from the police, you will also have to deal with the military, including several tanks! Thanks to the gear from the convoy, Michael, Trevor and Franklin, fortunately, come well prepared for al surprises and, as a result, the mass extermination of the enemy should not be that difficult.

NOTE: After the completion of this mission, Trevor and Michael will not be able to visit Los Santos for some time , because they will be hunted there by hostile gangsters working for Martin Madrazo, who will be alarmed straight away of their coming to the city. If you still need to take care of any side missions in the city, it would be good to do them now, before starting this main mission. 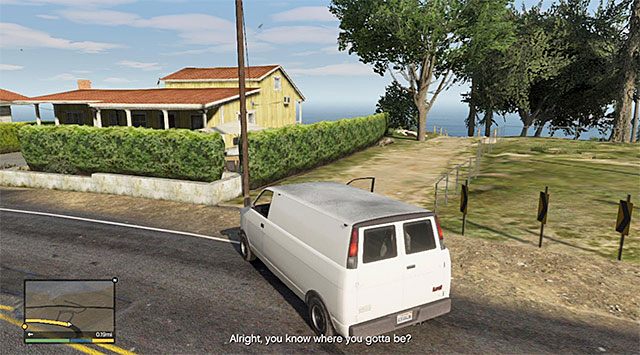 The place where Franklin drops off

Just like in the case of the preparatory mission before the bank heist, after you reach the meth lab, you need to climb up the stairs to the upper floor. Wait for the meeting to end and, while playing as Michael get into the van. You can now drive to Paleto Bay, i.e. to the Northern part of the map. After you get into the town, drop Franklin off in the marked area. 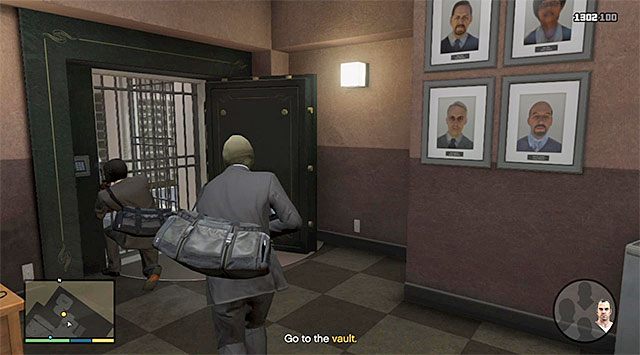 The entrance to the vault

Park the van in front of the bank and come inside, at the same time target the bank's employees. Wait for the request for help at forcing the gate to the vault open, and go there. After a while, you will cut to Trevor. After you have learned the situation outside, also with this character go into the vault. Get ready, because there is the most exciting part of this mission ahead of you! 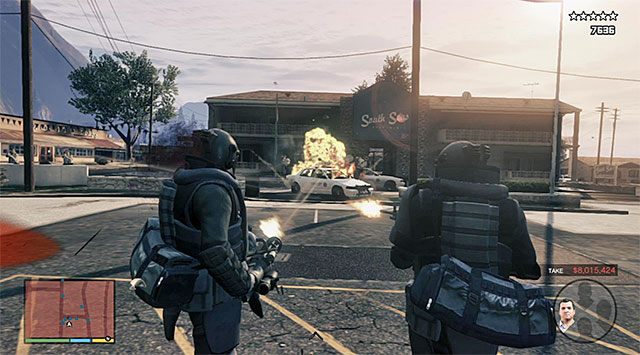 Keep blowing up one police car after another

Continue playing as Trevor and start discharging your minigun in his inventory. To the extent it is possible, you should first target the police cars, because destroying them will not only allow you to deal with them quickly, but will also bring you closer to meeting one of the requirements to complete this mission in 100%, which concerns wreaking havoc. Do not worry too much about the fact that you are out in the open, because the armors of all robbers are very durable. It is also worth knowing that, as a result of enemy attacks, you will be losing small portions of the loot so, you should not ignore the enemy fire too much. 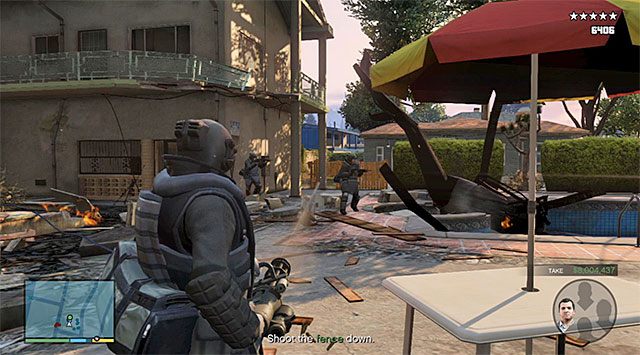 Soon after the fights start, there will appear a police chopper above the bank and, it would be good if you shot it down quickly. Depending on your preference, you can switch to Michael for a moment, or keep playing as Trevor. Regardless of on which character you decide, walk along the narrow alley located across the street of the main entrance to the bank. Be prepared here to eliminate further policemen, who will appear on the right. Then, use Trevor's minigun, or any other effective weapon, to destroy the fence shown in the screenshot. 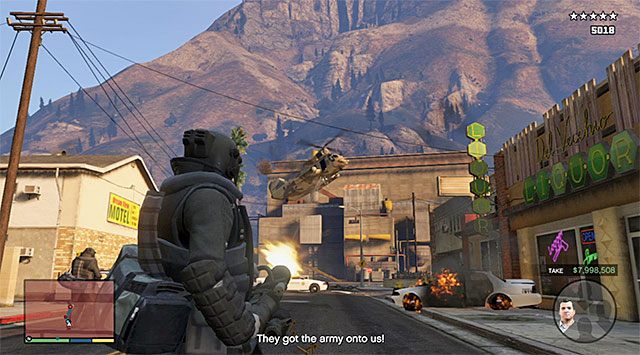 Things will soon go from bad to worse and the harbinger of the problems will be the appearance of two large vans with SWAT soldiers inside. Try blowing up both of them, before better equipped enemies come out. Follow the other robbers and react quickly to the appearance of a military cargo helicopter by shooting it down. 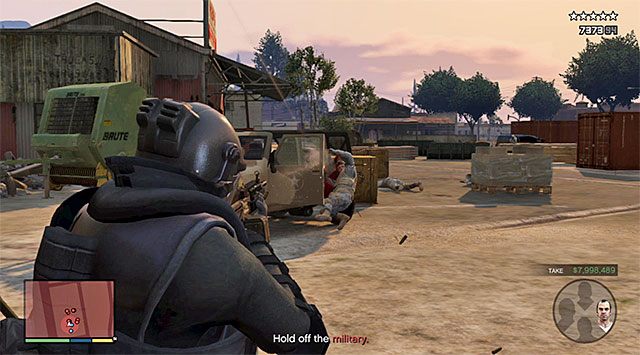 Keep eliminating the incoming soldiers and destroying their cars

After you reach the next square, the game will suggest that you cut to Michael and both fight the soldiers approaching the battlefield, mainly in the off-road cars. It is, obviously, a good idea to make use of the special skill of the controlled character, i.e. time slowing. Also, keep taking advantage of the large firepower of the weapons you are equipped with, as well as of the fact that you are carrying large amounts of ammo. The game will soon start a cutscene and, if you have chosen a good gunman for the mission, he will suggest that you split into two groups, while remaining here to continue fire and make it easier for Trevor and Michael to evacuate. 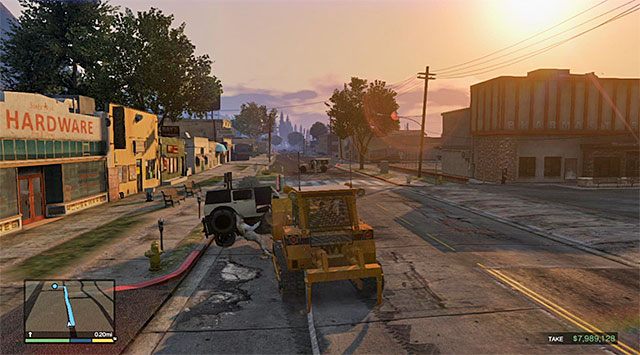 Soon, for the first time throughout this mission, you will cut to Franklin, who stole a bulldozer in the meantime. Drive along the town's streets, towards the colleagues and, to the extent it is possible, tip over the jeeps in your way (the above screenshot), and squash soldiers. Do not get carried away with this sort of actions, though, because Franklin is not wearing any armor and the bulldozer's cabin is not indestructible either. 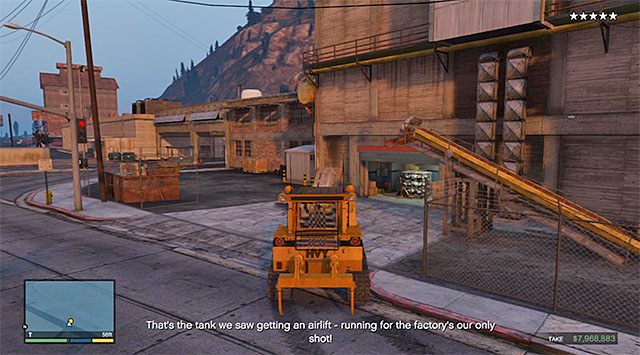 Reach the square with Michael and Trevor in it and wait for another cutscene. Drive towards the factory building that you can see in the distance. Along your way, ignore any tanks because, as long as you do not stop here, you are safe. Drive up to the factory's entrance as much as possible, which will conclude your drive on the bulldozer. 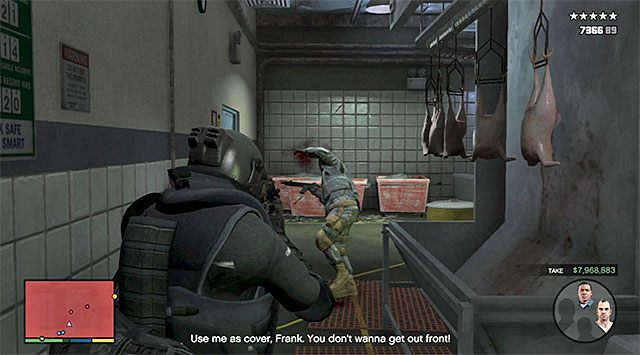 Keep cutting through one factory room after another

During the walk across the factory, you need to play either as Michael or as Trevor, because Franklin is not wearing the special armor and could easily die, as a result. Keep eliminating the soldiers and secure one room after another. 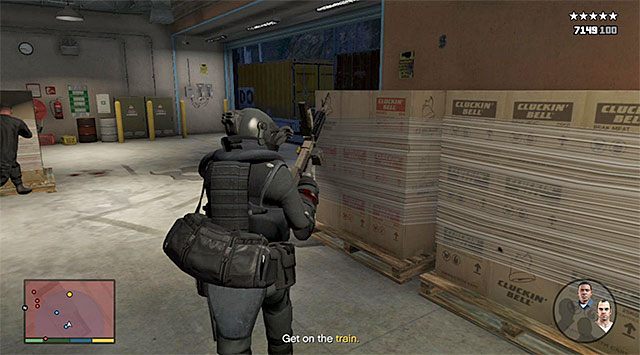 It is worth knowing that, if you hired a skilled gunman, you will not have to worry about any attacks from the back and, as a result, the escape from the factory will be much easier. Continue along your path and watch out for the soldier who can, unexpectedly, throw a grenade. Ultimately, you need to reach the train station at the back of the factory, which will conclude this mission.

Rewards and challenges in mission 54 - The Paleto Score