This page of the guide to Grand Theft Auto V has a walkthrough for mission 53 - Predator. Our GTA 5 guide explains how to chase O'Neil brothers, how to find enemies using the helicopter, and how to deal with the last enemy.

Way to unlock: You need to complete Main mission 51 (Paleto Score Setup). While playing as Trevor, wait for a phone call from Franklin, who will inform you of the activity of the O'Neil brothers and of the fact that he is trailing some of them. You can visit Trevor's trailer, while playing as him, or as Michael, (letter T on the world map) or cut to Franklin to start the mission automatically.

Additional information: The initial part of the mission is nothing out of ordinary, and it assumes that you take part in an easy chase and fly a helicopter. The second part is more interesting, where you will need to track down the people that you are looking for, first from aboard the helicopter, then with Chop's help. 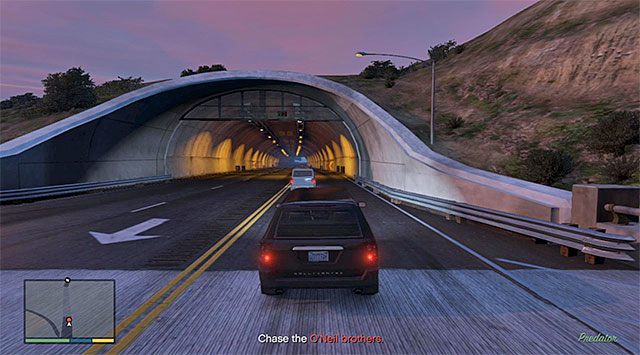 The moment when you start your chase after the O'Neil brothers

It has been already said that, if you cut to Franklin, you will miss the entire initial part of this mission. As a result, it is much better to play as either Michael or Trevor while visiting the trailer in Sandy Shores. After you have listened to the conversation, get out of the trailer and start a journey on your car. At this moment, you will automatically cut to Franklin who is following the O'Neil brothers' SUV. 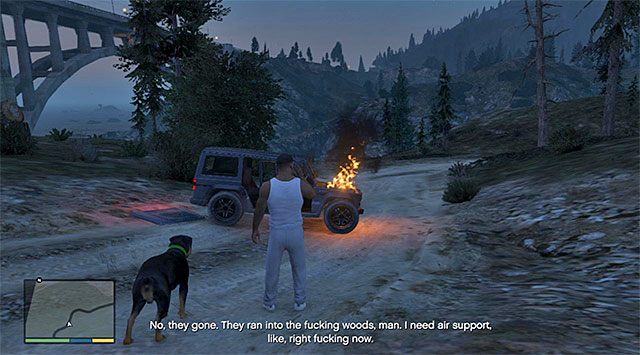 You need to approach the blazing wreck

This chase is not too demanding, especially that the highway is wide and there should not be too much traffic there. You only should watch out while sliding off the highway, and try not to bump into anything or anyone. The SUV that you are chasing will soon fall off the slope and catch fire, and the O'Neil brothers will get away from the wreck. Get out of your car and approach the blazing car, then wait for Franklin to contact his colleagues. After you cut to Trevor, finish your ride to the airport and get into the chopper (Frogger). You can now start your flight to the West, i.e. towards the woods, where the O'Neil brothers' SUV crashed (your destination is the yellow circle hovering over the woods). 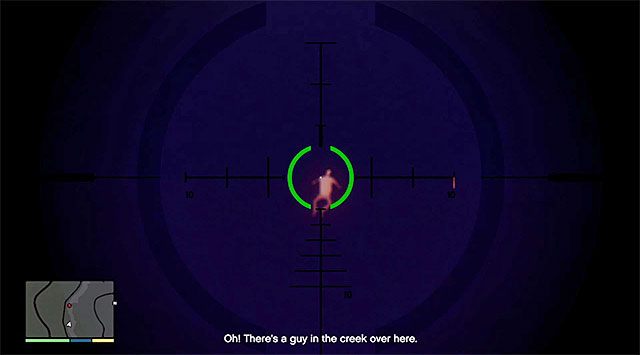 Wait to cut to Michael and start your search through the woods to find the O'Neil brothers (Note - do not shoot at the game because this will render you unable to complete this mission in 100%). Use the thermal vision mode to your aid (the appropriate button on the D-pad) examine all of the nearby heat sources, with the goggles zoomed in to the maximum. You will notice the first one of the brothers in the stream on the left. 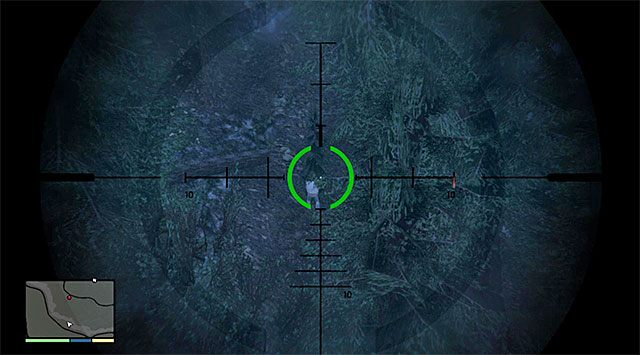 The second one of the O'Neil brothers

The second one of the brothers is in the central part of the woods and it is much easier to locate him. Murder this one and resume your search. 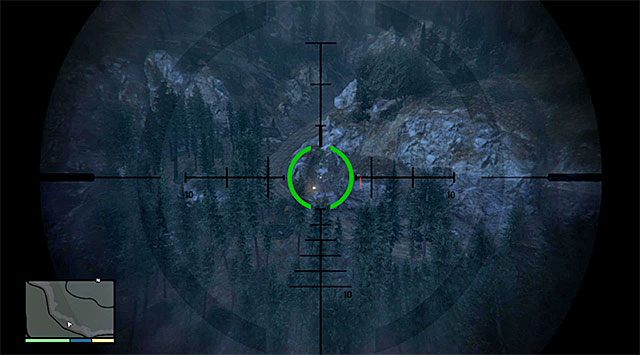 The last one of the enemies is hiding in the place shown in the above screenshot, i.e. near the hill. Do not get scared to see a rocket shot towards the helicopter, it is a part of the mission. Also, do not attempt to target the enemy from aboard the helicopter, and cut to Franklin. 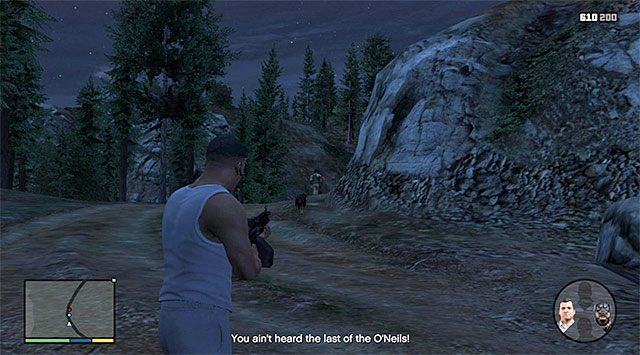 Eliminate the last one of the enemies

After you cut to Franklin, follow Chop and make your way through the little brook. What is interesting, you can also cut to Chop (only as a spectator) to speed up the process of finding the last one of the O'Neil brothers, although this is not necessary. After the dog finds the last brother, shot him as Franklin. Wait until you cut to Trevor, land in the woods to collect Franklin and Chop, and return to the airfield, which will conclude this mission.

Rewards and challenges in mission 53 - Predator