This page of the guide to Grand Theft Auto V has a walkthrough for mission 41 - Blitz Play #2. Our GTA 5 guide explains how to do the heist once the preparations are complete. You will learn, for example, how to start the heist, how to act as the different characters, and escape.

The introduction to the Blitz Play mission can be found on a separate page.

Additional information: The heist itself is, fortunately, more complex than the previous missions, which were as short as they could get. The first part of this mission is an attack on an armored van and the game will not get you the opportunity to show what you can do. The second part of the mission is way more interesting and it assumes fighting against large police forces. The final part is a pure formality, because as a result of having gotten rid of most of the police officers, your passage to the vehicle that you have stolen earlier, will go unhampered. Note - if you want to make better preparations for the mission, you should also buy armors (or better weapons/ammo) at one of the Ammu-Nation stores. 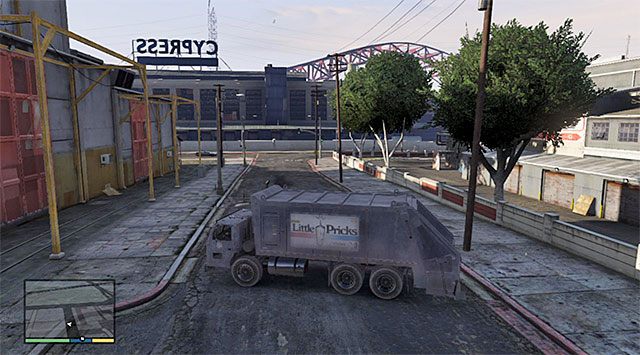 Ju8st like before, you can reach the base, located in the El Burro Heights district, as any of the three protagonists. After you watch the cutscene, wait until you cut to Michael and go to the Cypress Flats district, located to the North-West of here After you get there, watch a short cutscene and park the trash truck in the way shown in the screenshot, thus blocking the whole road. 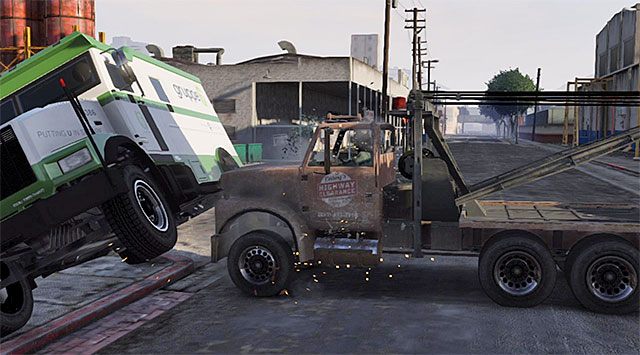 You need to slam into the armored vehicle

Wait until you take control of the tow truck controlled by Franklin and drive towards the armored vehicle, which will be stopped by the trash truck, which was parked across the road by Michael. Slam into the van as hard as you can. 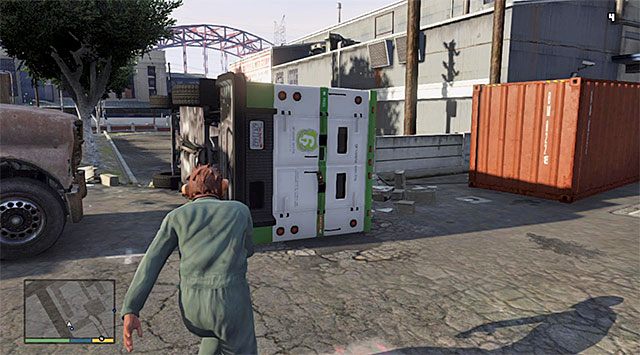 You will still have to control Franklin. Get out of the truck, quickly, approach the back part of the tipped armored van, and make sure that you have selected the Sticky Bombs from your inventory. Stick one of the bombs to the back gate of the armored van (the above screenshot), walk away a bit and detonate it. Wait for Michael to collect the loot from the van, while you are aiming at the guards. 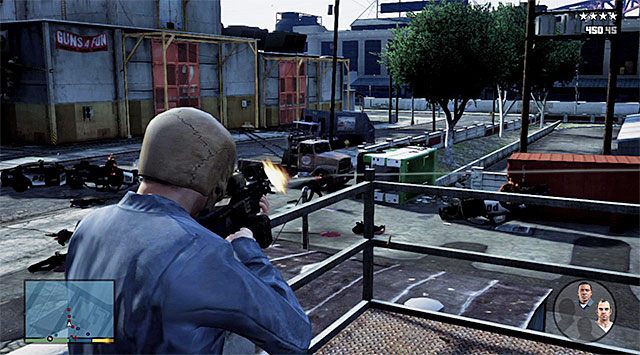 You are up for the most difficult, and the most interesting at the same time, part of this mission. You need to fight back the police (four stars) until you eliminate (almost) all of them. What is even more, you can freely cut between the three playable characters. While playing as Michael, the easiest way to fight back is from the balcony shown in the screenshot and to slow down time as often as possible. Thanks to this you will not have to take unnecessary risk and will be more efficient at killing enemies. 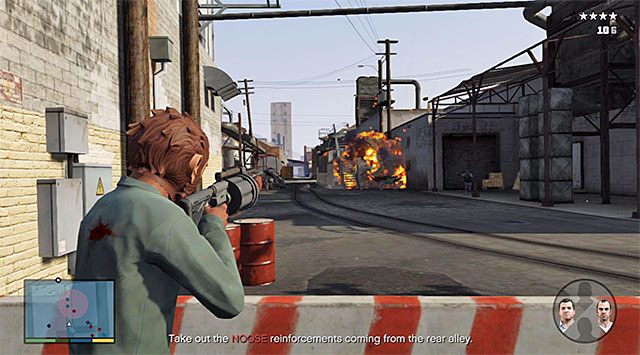 While playing as Franklin it is best to keep an eye on the side alley shown in the screenshot, where new enemies will, quite quickly, start to appear. If you want to, you can use bombs or the grenade launcher to your aid, to eliminate larger groups of law enforcers easily. 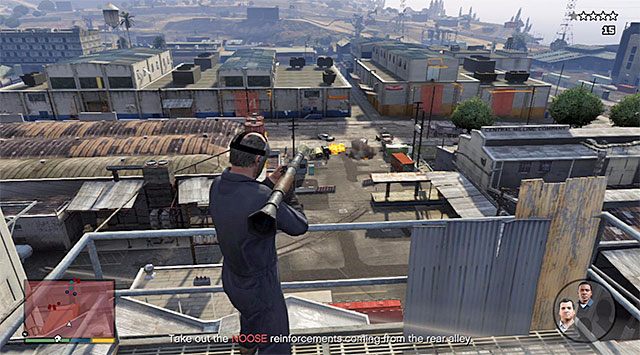 While laying as Trevor it is good to make use, predominantly, of the rocket launcher that is in his equipment. Initially, you can use the launcher to blow up the police cars (the above screenshot), but later on you can eliminate larger enemy groups this way. Trevor, should also cover Michael and prevent the police from getting too close to the balcony he is occupying. For this, you can use the sniper rifle. 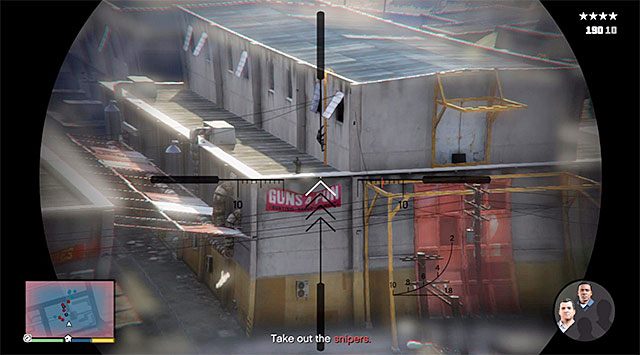 While fighting, try changing the character you are currently playing as, on a regular basis, especially that, to complete this mission in 100%, you will have to perform ten such changes. You should also take into account the fact that things will get additionally complicated. The first serious impediment is the appearance of enemy snipers on the roof of the building to the right. It would be best if Trevor took care of these characters (the sniper rifle). 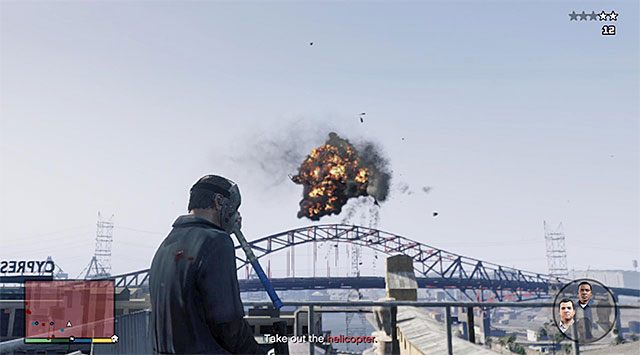 Shoot down the police chopper

The second impediment is the appearance of the police chopper over above the battlefield. Also in this case, it is Trevor that should move into action, and bring down the enemy helicopter with the rocket launcher. Continue fighting to decrease the police in numbers. Their strength is symbolized by the stars and towards the end of the mission, instead of the initial four stars, there will only be one. 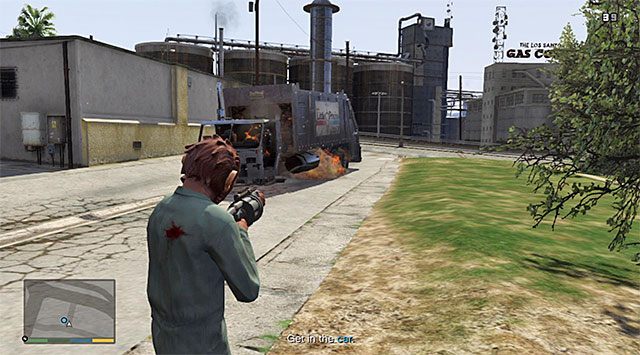 Wait for a command from Michael, cut to Franklin and reach the trash truck (Trashmaster), while ignoring single enemies in this area. You now need to make it over to the car that you have parked in a side alley in one of the previous missions and, if you have chosen the place well, this will not be long. After you get there, destroy the trash truck (e.g. with another bomb), get into the getaway car and drive away from the truck wreck. 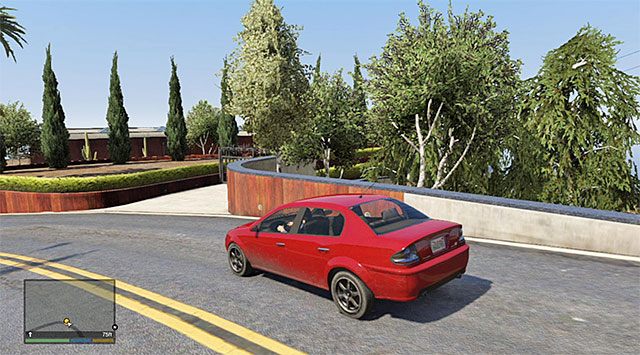 Wait for a phone call, after which you will cut to Michael. The last thing for you to do is reaching Devin Weston's estate, located on the Tongva Hills, to the North of Los Santos.

Requirements for the completion of the mission in 100%: -