This page of the guide to Grand Theft Auto V has a walkthrough for mission 32 - The Merryweahter Heist - the freighter variant. Our GTA 5 guide has tips on how to eliminate enemies using the sniper rifle, how to plant explosives, destroy the helicopter, and use the minisub.

If you chose the Offshore variant, check its separate page.

Way to unlock: You need to complete Main mission 31 (Minisub) and, as Trevor, wait for a phone call from Wade (Also it may turn out to be necessary to complete some other missions as Franklin or Michael). You can now return to Floyd's apartment (letter H on the world map).

Additional information: This heist is more demanding than the one on the jewel store and, to an even larger extent, it relies on cooperation between the playable characters. This mission consists of two constituent parts - first you need to plant explosives on the freighter and detonate them, and then examine the freighter's wreckage in search for the precious cargo, and steal it using the sub. 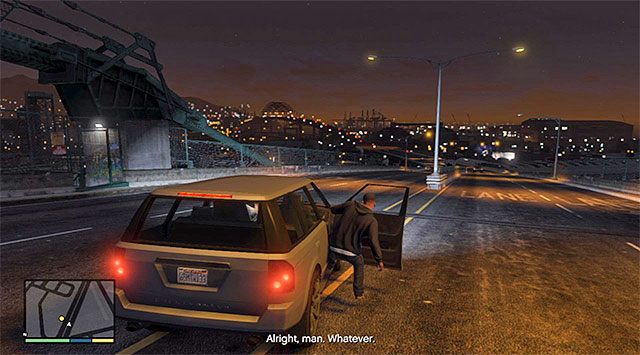 After you return to Floyd's apartment, watch the cutscene of the meeting of all the people involved in the heist. Walk outside and use Trevor's car, or any other vehicle, capable of taking at least three people. Your first task is to reach the bridge located near the port, i.e. the place from which Franklin will be able to cover his colleagues. 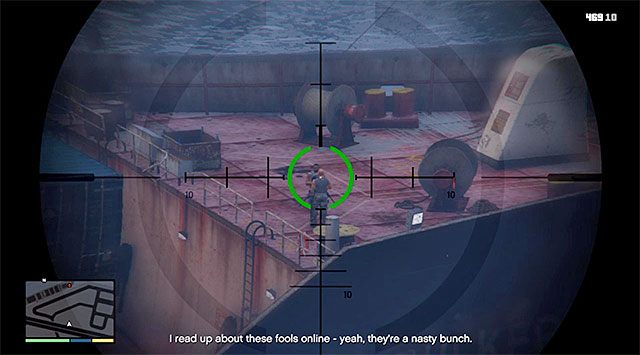 Wait for the game to cut to Franklin and take the vantage point near the stairs. Watch another short cutscene and, after it finishes, take a single shot at the two guards shown in the screenshot. 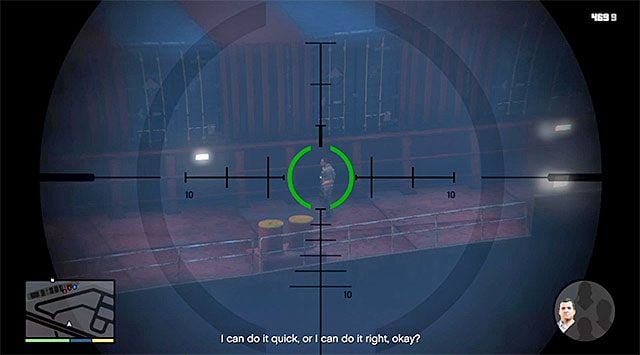 As Franklin, you need to help Michael stay in hiding

From now on, you will be able to cut between Franklin and Michael without restrictions. If you want to play as Franklin, you need to use your sniper rifle to help Michael eliminate all of the guards effectively, who appear in his way. Try not to miss them, the important thing is that you o not need to aim at their heads because, by hitting them on the chest, you will also be able to take them down with a single shot 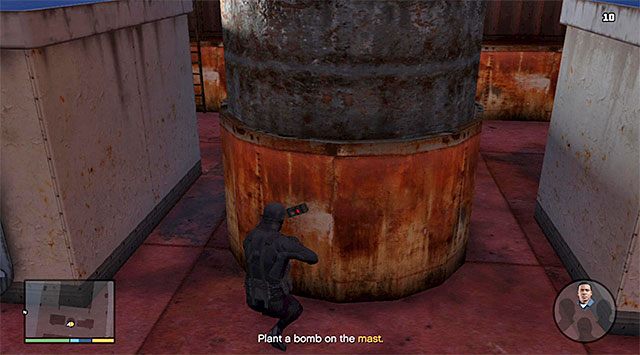 While playing as Michael, you need to sneak across the board and plant the explosives one after another

If you want to play as Michael you need to reach places where you are supposed to plant explosives . After you make it to the marked point, select the Smart Bomb from your inventory and plant it (do not detonate it!). In my opinion, controlling Michael is a better decision, because you will be then allowed to dictate your pace in an easier way. What is even more, Michael has a suppressed pistol so, he can also eliminate the enemies silently. 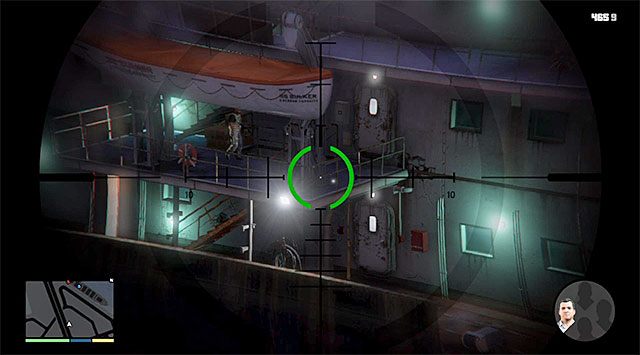 The region f the ship's entrance

After you have planted three bombs, it will turn out that you need to plant the fourth one inside the ship. It is a good idea to take control over Franklin here and help Michael at clearing the manhole that he needs to reach. You especially need to watch out for the enemies occupying the upper balconies because, for obvious reason, their range of vision is wider. 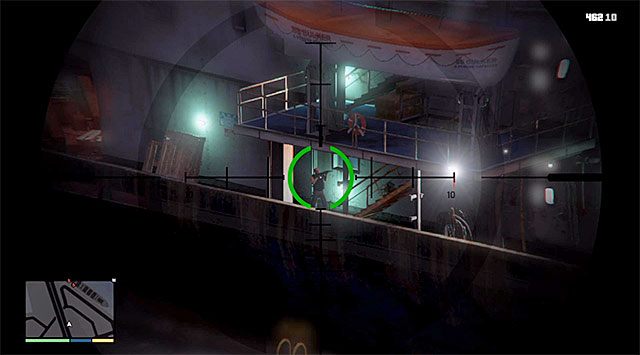 Do not worry about the fact that, onboard the freighter, the alarm will be raised, because there was no way of preventing that. You now need, while playing as Franklin, cover Michael, who is running to leave the vessel's board. Keep listening to his comments and eliminate, with the sniper rifle, all of the guards that appear nearby. 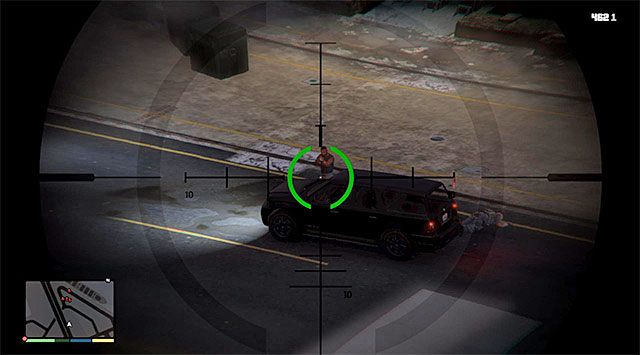 Defend yourself from fire

Things will soon get complicated, though, because Franklin will be noticed and, as a result, the enemies staying in the port will lay fire down on him. Ignore Michael, for the time being, and focus on eliminating the enemies that are currently firing at Franklin. Eliminate in the first place the enemies staying out in the open and then, the ones hiding behind cars and the other covers. 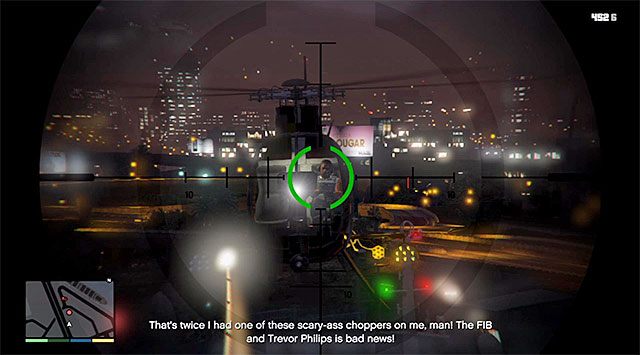 Be ready to bring down the enemy helicopter, by targeting it as soon as you receive news of its appearance in the area. Just like in the case of the previous main missions, it would be best if you aimed at the chopper's pilot (the above screenshot), which will cause the machine emergency land. 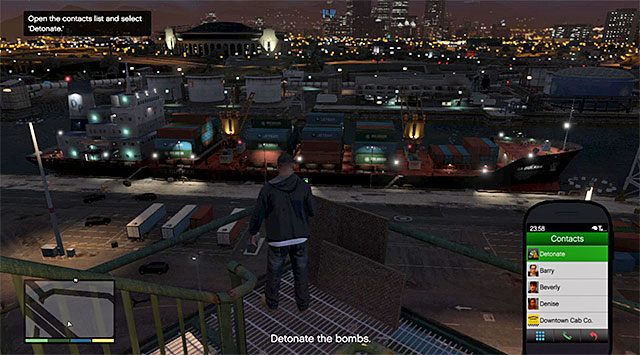 After you have dealt with all of the mercenaries, who have been firing at Franklin's positions, you should resume covering Michael who is trying to escape from Merryweather's board. After you watch a short cutscene of Michael jumping into water, select the phone from Franklin's inventory, access Contacts and Detonate the charges. 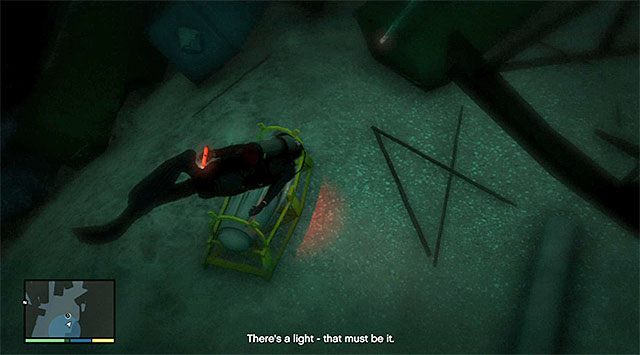 Wait until you take control over Michael and set out to find the cargo. Steer the sub basing on the sonar readings, towards the point that the sound waves come from. After you come close to the cargo, it will be marked with a green marker, which has been presented in the above screenshot. 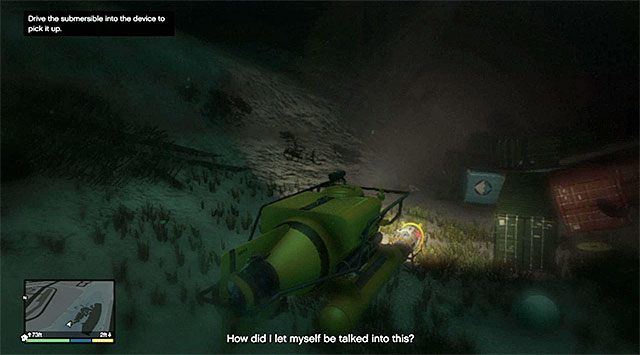 You need to approach the cargo, thanks to which it will cling to the sub

After several moments you will take control over Trevor. Set out towards the cargo found by Michael, and try not to bump into the containers or the bottom on your way there. Approach the cargo as much as you can, thanks to which it will automatically cling to the boat. 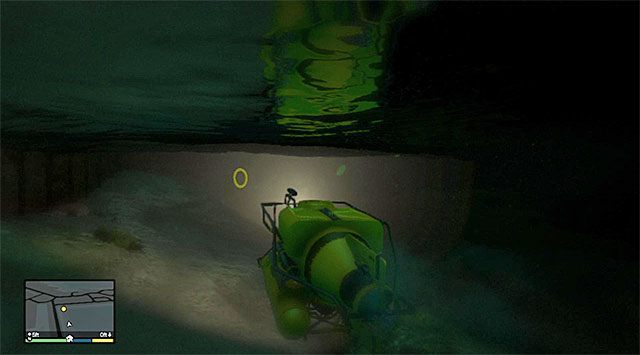 The only remaining thing for you to do is approach the spot where the sub needs to be pulled out of water, which is located to the South-West of the place where you found the cargo. Along your way, use the map of the surroundings, to your advantage, which will make it easy for you to locate the right path (the yellow ring hovering underwater). This mission will soon end, and it is not going to be as fruitful as the characters participating in the heist, would have wished it to be.