This page of the guide to Grand Theft Auto V has a walkthrough for mission 18 - Nervous Ron. Our GTA 5 guide explains how to purchase and upgrade a sniper rifle for Trevor, how to eliminate all enemies at the airport, where to drop the cargo transported with the stolen plane, and how to land without crashing.

Way to unlock: You need to complete Main mission 17 (Mr. Philips). After some time, next to Trevor's trailer, there will appear a marker that informs you of the possibility to start a new mission (letter T on the world map).

Additional information: This is another very exciting mission and, as much as at the beginning you will have to try to eliminate the enemies without raising the alarm, sooner or later things will get increasingly complicated and you will take part in a major fight at the airport, this time. The final part of this mission is a quite complex tutorial that covers the topic of pilotage, and more precisely the using of one of the basic models of aircraft. 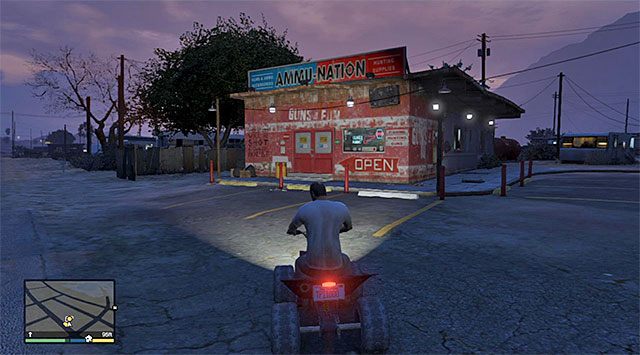 After you return to Trevor's trailer, you will meet Ron and talking to this character will start the mission. Wait for the cutscene to end and mount one of the ATVs parked in front of the trailer (Nagasaki Blazer). The first place that you need to visit is the local Ammu-Nation store so, go West. 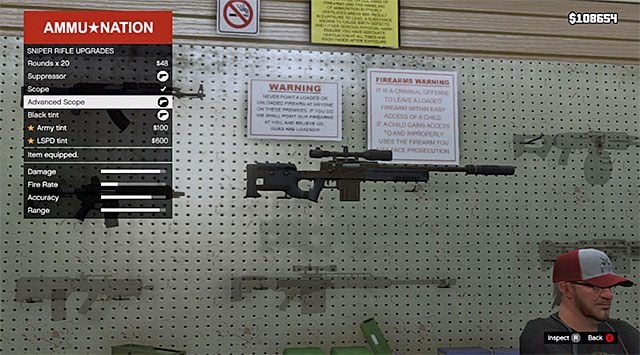 Park in front of the store, enter and talk to the salesman. You need to take the sniper rifle, which you got for free, and upgrade it with a Suppressor., as well as the Advanced Scope. After you collect the upgraded weapon, return to the ATV and reach the airport to the South-West of here. There, you need to climb the water tower. 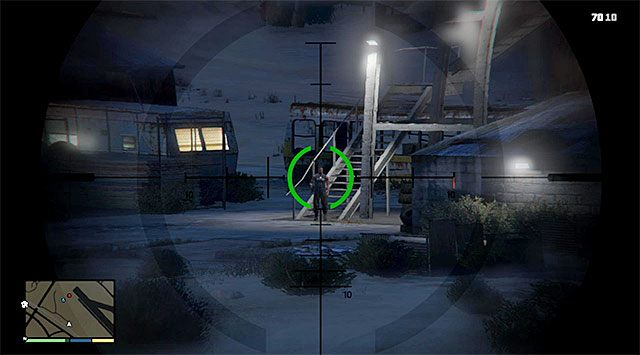 The first enemy to shoot

Select the sniper rifle from your inventory, enter the targeting mode and zoom in as much as possible. First of all, target Ron and listen to his comments and instructions carefully throughout this mission, because they will concern the problem of avoiding detection. Start by shooting the enemy on the stairs at the foot of the control tower (you do not need to aim at the enemies' heads, because hitting them on the chest will do equally well). 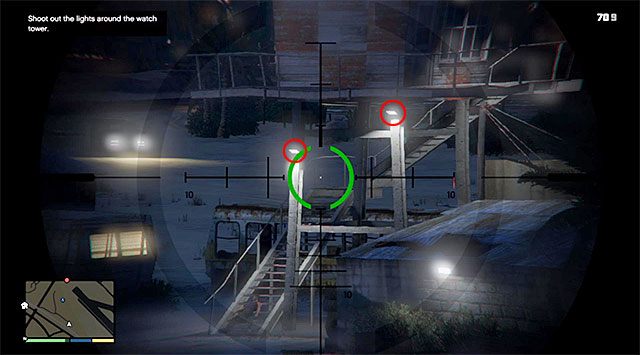 The next step is destroying the two lamps marked in the above screenshot, and you need to do that before the incoming car comes within short distance of the person you have just shot. Start targeting the van and, follow Ron's instruction of not shooting until there will be an enemy getting out of it. 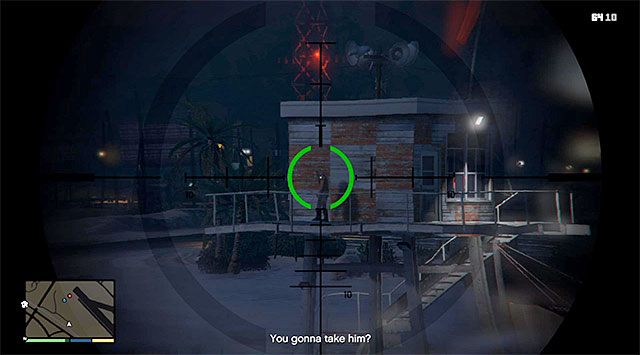 An enemy atop the control tower

The next target for elimination is the guard that will appear atop the control tower, i.e. above the enemy that you killed as the first. After you shoot, start observing the region of the stairs, at the foot of the tower, once again. This is so, because there will soon be an enemy to stop in that region. Shoot him before he notices the body and alarms the rest of the bikers. 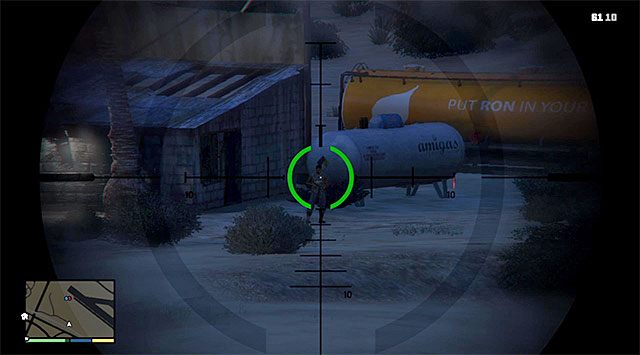 The region of the gas tank

Target the upper part of the tower again and eliminate quickly the enemy that will appear on the external balconies. Start observing Ron once again and wait for him to reach the place where he is supposed to plant the explosive, i.e. near the gas tank. You should especially be careful while eliminating the second biker, and eliminate him before he raises alarm. 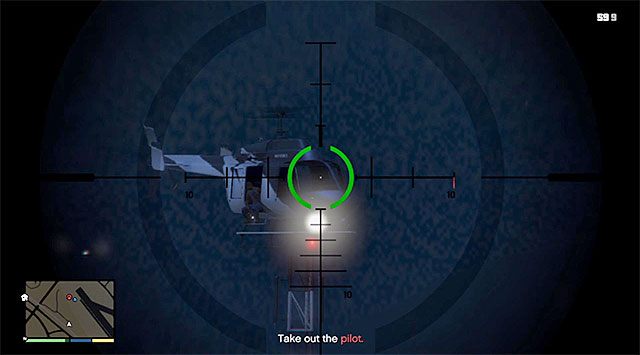 Wait for Ron to plant the bomb on the gas tank and be ready to eliminate the last enemy, who will approach from the right. This is not yet the end to your problem, because, there will be an enemy helicopter to appear above the airport. Again, listen to Ron's suggestion and shoot the pilot at the right moment (the above screenshot), to stage an accident. 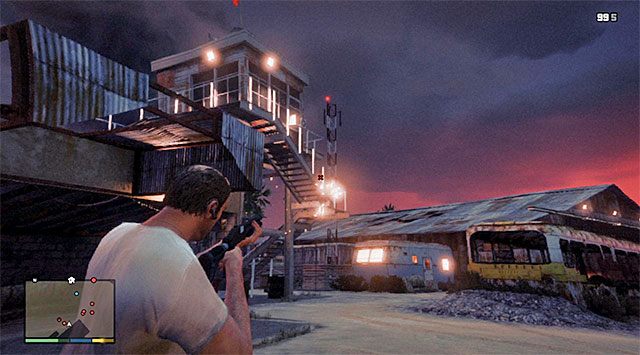 During the airport fights, use Trevor's special skill to your advantage

Unfortunately, although this ended in success, you will no longer be able to stay in hiding and, as a result, you will have to take up some more aggressive action. Go quickly towards the apron area and, after you get there, dismount your ATV and start the standard fights. Just like in the case of the fight in the previous mission, it is a good idea to use Trevor's special skill to your advantage, because it will be easier to get rid of the enemies in the fury mode. 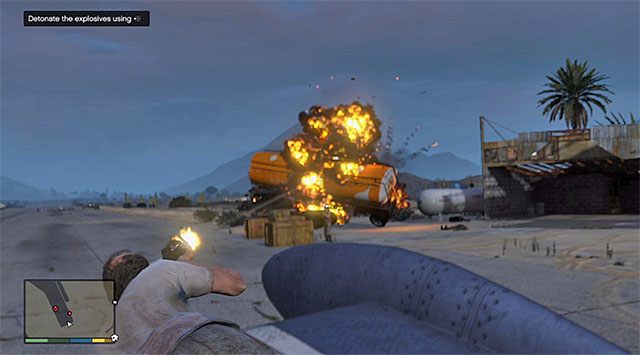 Ultimately, you need to eliminate all bikers that are staying on the runway. After you have cleared this area, dash into the hangar on the left, so that Trevor can automatically jump onto the wing of the plane piloted by Ron. This is not the end yet, because you need to continue fire and eliminate, in the first place, those who appear the closest to the plane. After the plane, piloted by Ron, makes it into the runway, detonate the explosive that you have planted earlier, and also aim at the orange tanker parked on the right. 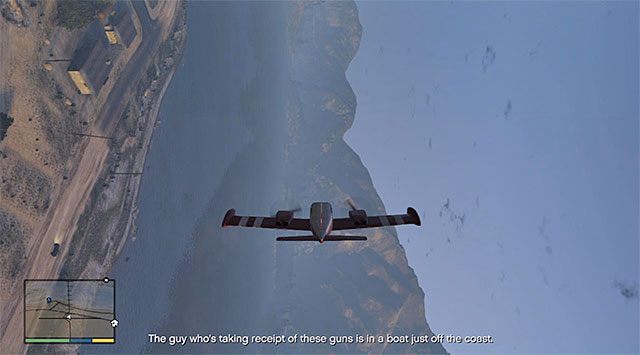 After the successful take-off, hide the gear and throw off the last one of the bikers

Try to eliminate all of the bikers staying at the airport, because it is one of the requirements if you want to complete this mission in 100%. After a few moments, Trevor will let go of the wing and, automatically, run up to another plane (Cuban 800) on the runway. Start accelerating, try not to taxi off the runway and ignore the new bikers. After you have gained enough speed, bounce off the ground and hide the landing gear. It is also a good moment to shake off the enemy, who managed to cling to the right wing, by performing a full spin. 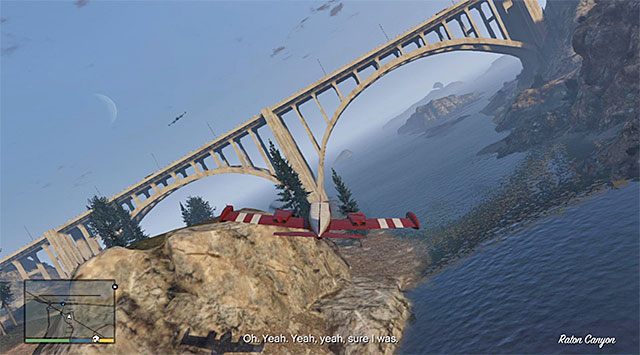 You now need to follow the plane piloted by Ron. It is a good idea to get acquainted with the basic information along your way, concerning the controlling of aircraft. During your way to the drop zone, you should also be on the lookout for any opportunities to fly under the bridges that you pass by, because this is one of the requirements to complete this mission in 100%. 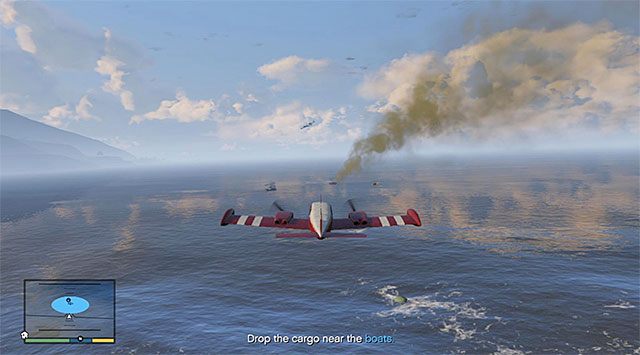 After you get close to the military base, follow Ron's instruction and lower your altitude, thanks to which you will not be spotted by the radar and avoid alarming the base to your presence. Do not overdo with flying on the low altitude, though because you could crash. Continue your flight and, after you get to the area shown in the screenshot, press the button that the game prompts you to, which will result in the cargo being dropped. 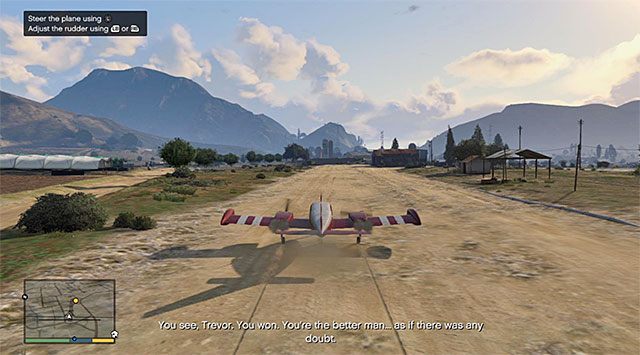 The final part of this mission is returning to the other airport in this area. You still need to remember to keep at low altitude (and not flying directly over the military base!). Also, look around for possible bridges to fly under. After you approach the airport, extend the landing gear, decrease the plane's flying speed and land carefully. The only thing left for you to do is park the plane in the hangar, which will conclude this mission.