This page of the guide to Grand Theft Auto V has a walkthrough for mission 17 - Mr. Philips. Our GTA 5 guide will help you complete the first chase as Trevor, eliminate all the hostile bikers and push down the trailer with Ortega.

Way to unlock: you need to complete one of the missions connected with the heist on the jewel store (The jewel Store Job), i.e. either mission 13 (the Loud variant) or mission 16 (the Smart variant). You can now go to Michael's house (letter M on the world map).

Additional information: The beginning of this mission may be misleading, because you control here neither Michael nor Franklin and, for the first time in the main campaign, you take control over Trevor. This mission has been constructed in such a way, so as to prove how violent and mentally unstable a person Trevor is - you will have to handle a car chase, shootout and even an attempt to push a trailer into the river.

NOTE: From now on, the option to cut to Franklin and Michael will be temporarily disabled (also between individual missions). To enable it again, you need to complete several of the main missions reserved for Trevor. 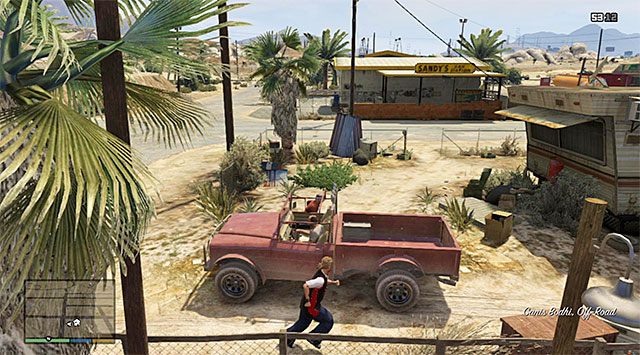 The first step is to go to the villa as Franklin or Michael and, as it is the case for this type of situation, the choice of character does not play any vital role. Enter Michael's estate so that the game can start several new cutscenes. After they finish, you will cut to Trevor. Start by taking a seat in Trevor's truck (Canis Bodhi) and wait for Ron and wade to join you. 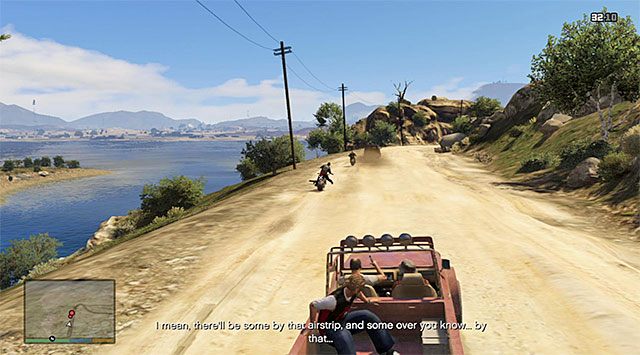 Drive towards the location named Grapeseed. Your current destination is the farm where Trevor will meet the members of the biker gang. After you watch the cutscene, start chasing behind the bikers. During this pursuit, ignore attacking the black van . It is a good idea to wound two bikers at the right moment (the above screenshot). 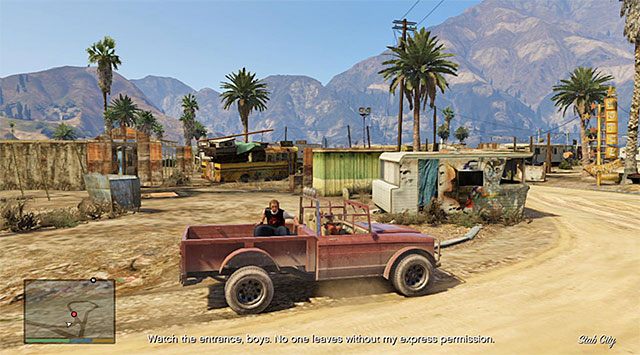 Keep following the black van, remember not to perform any dangerous maneuvers and keep in mind that your truck is not too maneuverable. The chase will end near the motel (or rather a trailer park) and you will have to fight a quite easy battle here. I recommend against using the car here. You'd better get out of the vehicle and select one of the available weapons from the inventory (e.g. the shotgun). 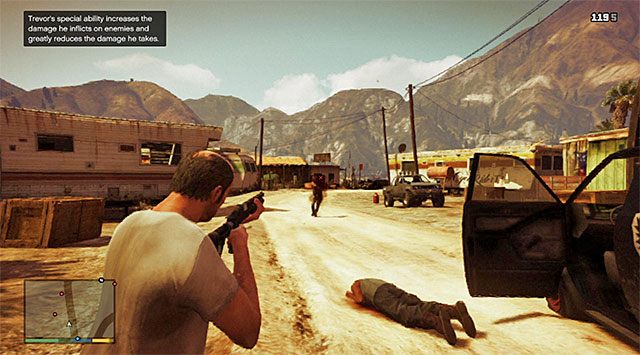 Stat shooting at the bikers that are staying in the area of the motel, while remembering to use covers frequently and about checking out on the radar if nobody is trying to surprise Trevor from behind or from the side. Occasionally, it is a good idea to get out from behind the cover and activate Trevor's special skill, which introduces him into the berserker state (the above screenshot). After you activate the fury mode, you do not need to worry, about the damage you take, that much. At the same time, it will be easier to eliminate enemies . Naturally, you should also remember about hiding behind a cover whenever you decide to disable the fury mode, or before it ends. 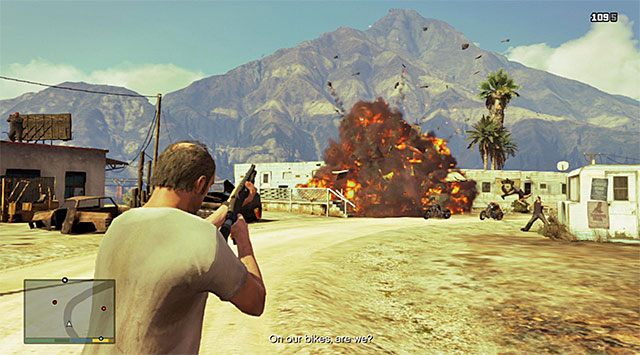 Shooting at the tank results in the explosion of the trailer

It has already been mentioned that you need to watch your back because some of the bikers will join in only after some time. At least one of them will also use a car in a attempt to leave the motel, and it is worthwhile to shoot him as he will be passing Trevor by. Furthermore, I recommend that you look around for explosive gas tanks and cause one of the bigger trailers to explode. After some time, the bikers will flee and, if you want to complete this mission in 100%, you need to get them before they get too far away (use a bike, or some other vehicle if you do not want to take too much unnecessary risk). 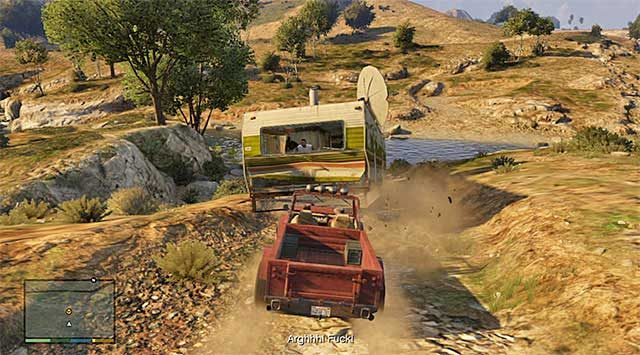 Keep pushing the trailer until it falls into the river bed

After the fights finish, collect the ammo from the defeated enemies and return to your truck, where there should already be Ron waiting for you. Now you need to reach the place where Ortega's trailer is. After you get there, Trevor will implement his plan of pushing the trailer, with Ortega inside, into the river. Press, and hold down, the acceleration button/trigger and do not let go until the trailer falls into the river. 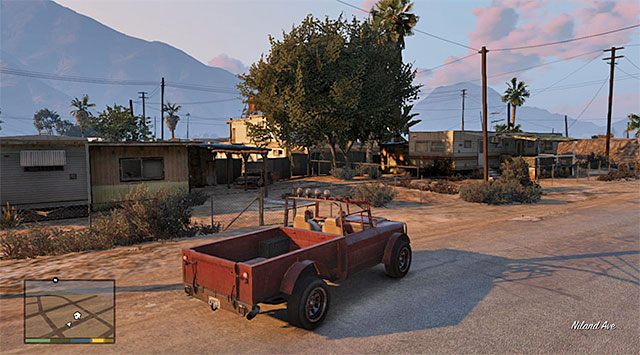 The place where this mission finishes

After a short conversation, frighten Ortega by aiming a gun at him. According to your preferences, you can leave and let Ortega lives or kill him. Get back into the truck and return, with Ron, to Trevor's trailer, which will conclude this mission.