This page of the guide to Grand Theft Auto V has a walkthrough for mission 7 - The Long Stretch. Our GTA 5 guide will help you get armed up, defeat the hostile gangsters, and lose the police.

Way to unlock: You need to complete Main mission 6 (Father/Son). After some time, next to Franklin's house, there will appear a marker informing you that you can start a new mission (letter F on the world map).

Additional information: this mission's constituent parts is, predominantly, a series of quite demanding shootouts when you will have to monitor not only your own health, but also that of your companions. On the other hand, you do not need to make any preparations in particular, because this will constitute a part of this mission. The end of this mission, is a three-star police pursuit which, due to Franklin's skills, should not prove to be too demanding. 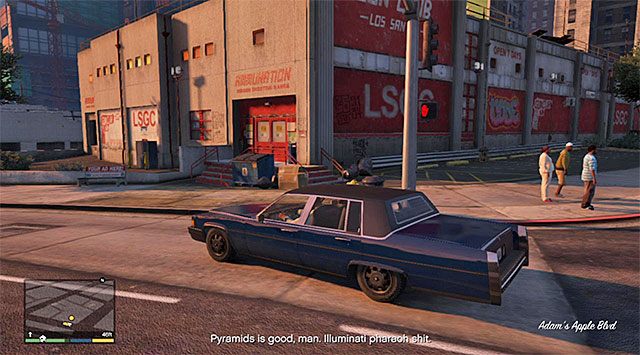 Return to Franklin's house and enter, which should initiate a cutscene. After it finishes, get into the car parked in front of the building (Albany Emperor), with Lamar and Stretch, and drive to the Ammu-Nation store, located to the North of here, which specializes in trading guns. 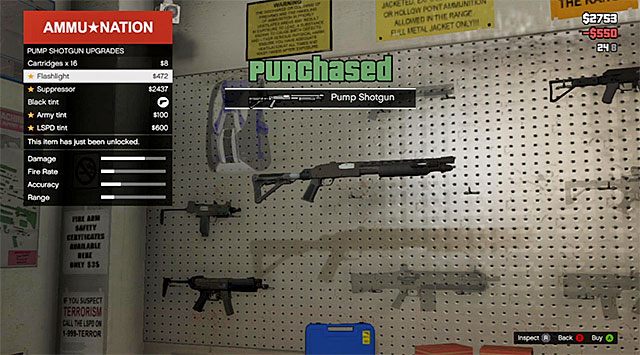 You need to buy a shotgun and a flashlight for it

Enter the store and approach the salesman to start the purchase. The compulsory purchase is the 550 dollar-worth Pump Shotgun, plus an upgrade in the form of a 472 dollar-worth flashlight. If you have enough money, it may be a good idea to get prepared for the future fights and obtain some other kinds of firearms, grenades and a good armor. After you finish shopping, return to your car. 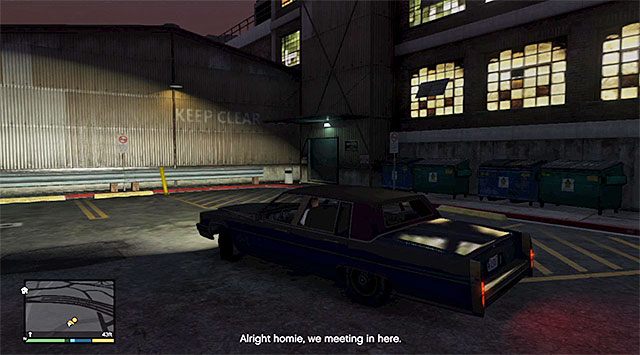 The next destination is the Recycling Plant located to the South-West of the store. After you get there, prepare your shotgun (or any other good weapon). Enter the building and go to the upper floor, thus reaching the room where you will watch another cutscene. 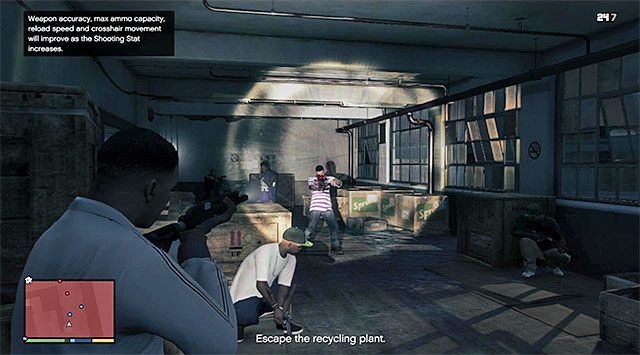 The first group of enemies

Right after the cutscene, dash into the neighboring room, stand behind the crates and start firing at the first group of the Ballas. It is a good idea to use the newly-bought shotgun here, because, in most cases, a single shot will do the trick. Remember, also, that you need to monitor Lamar's and Stretch's health because the death of either of them equals failing the entire mission automatically. After you eliminate the enemies, collect the ammo and weapons from their corpses, and follow your companions. 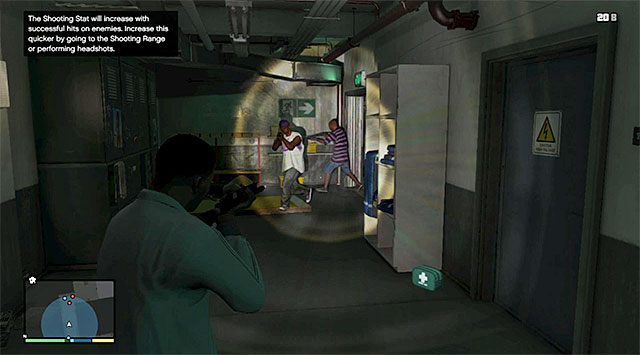 Watch out for the two enemies that will cut through the door in the location shown in the screenshot. You need to shoot them as quickly as possible (again, the shotgun will come in handy here), to prevent Lamar from dying. There are more gangster waiting for you in the neighboring room and you should not haste about walking into that room, and hide behind a good cover to eliminate all enemies without any pressure. 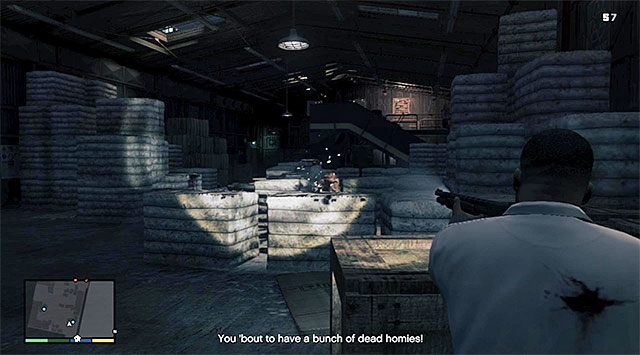 The last big hall in the plant

Reach the staircase and keep vigilant, while climbing down the staircase because you will bump into a hostile gangster. Open the yellow door, hide behind the crates and eliminate the enemies. Walk into a much larger area and start eliminating the gangsters. During the fire exchange, try and keep away from the right side of this area because, soon this part will catch fire and, as a result, a moment's inattention could end up really badly for your character. 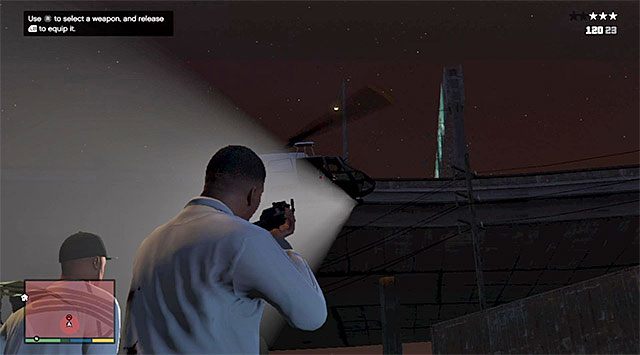 Go now towards the exit (you should notice a first-aid-kit along your way), deal with the last group of gangsters in the nearby corridor. After you exit the building, quickly select the Assault Rifle from your inventory (you probably collected one of these from one of the corpses) or any other weapon effective at a longer distance. You need to eliminate the two sharpshooters onboard the police chopper (the above screenshot). 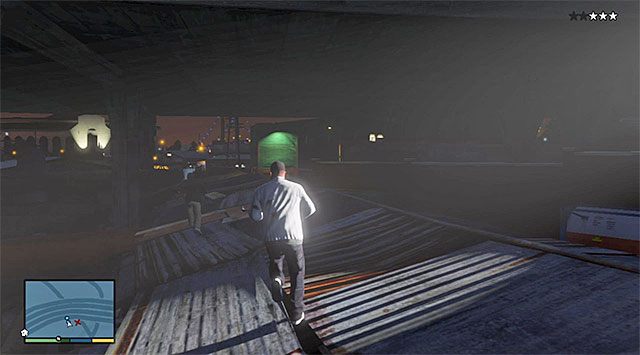 Escape over the rooftops

Follow Lamar and Stretch and go towards the yellow ladder. Start sprinting (by tapping rhythmically on the run button) over the rooftops. Keep close to your allies, ignore the nearby enforcers. Jump over the wall and locate a four-door car, as quickly as possible, and get into it. 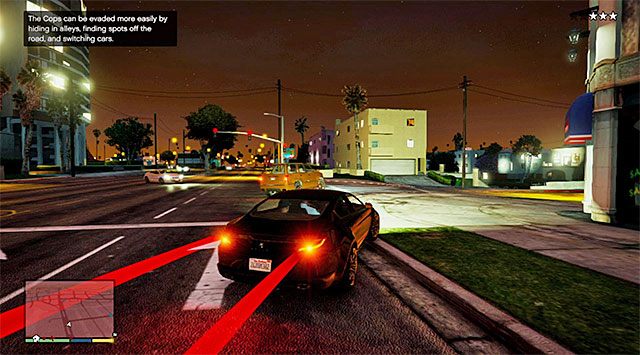 Now, you will have to escape a three-star police pursuit and, if you have not yet participated in this kind of things, it is good to know that, apart from the squad car, also a police chopper will join the chase. You need to lose the policemen so, first you need to move ahead of the enforcers and find an underground parking lot, or a tunnel or (if there is nothing better around) and alley or any other secluded place where you can wait until the chase is over. During your escape, it is a good idea to use Franklin's special skill, to be able to take sharp turns and get into the narrow alleyways without any problems. In order to, officially, complete this mission, you need to take your friends into the vicinities of Franklin's house.

Rewards and challenges in mission 7 - The Long Stretch