This page of the guide to Grand Theft Auto V has a walkthrough for mission 4 - Chop. Our GTA 5 guide has information on where to find the gangster, how to catch the escapee, and how to locate the hidden enemy as Chop.

Way to unlock: You need to complete the Main mission 3 (Repossession). After a while, next to Franklin's house, there will appear a marker that informs you that you can start another mission (letter F on the world map).

Additional information: Chop is the name of the Rottweiler owned by Lamar and it is this nice little doggy that is the main attraction of this mission. Apart from getting acquainted with Chap, there are two chases for you to have - one by car and the other one, where you will have to get the chased character on foot. 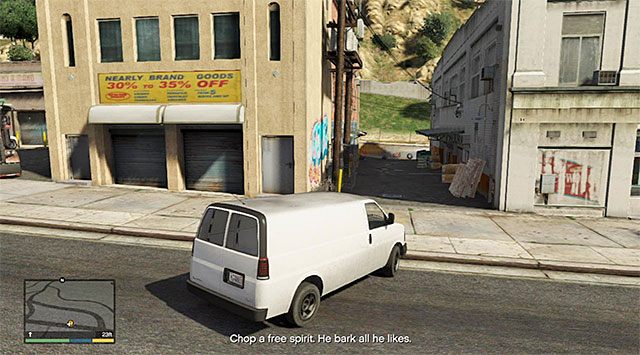 Approach the circle in front of Franklin's house, thanks to which you will see a cutscene of the conversation with Lamar during which you will learn about the scheme to abduct a member of the hostile gang of Ballas. Follow Lamar and reach the van (Vapid Speedo). Get into the car and wait for both Lamar and Chop to join you. Drive to Vinewood Boulevard - a district located to the North. After you approach the marked destination, drive into the narrow alleyway between buildings. 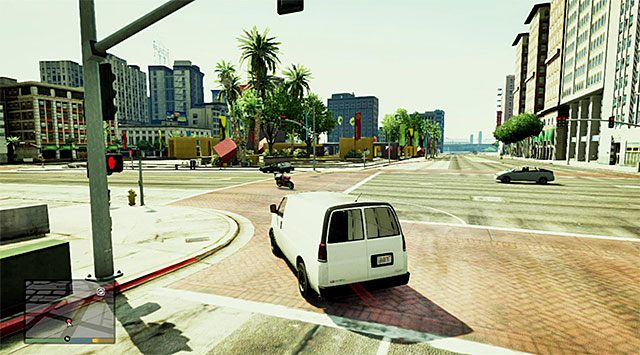 Once a new cutscene ends, return quickly to the van and start your chase behind the gangster escaping on a bike. During the chase, try using Franklin's special skill, i.e. slowing down of time, as often as possible. This will allow you to limit the risk of colliding with the other vehicles during fast ride and will allow you to perform sharp turns without the necessity to decrease the van's speed (the above screenshot). 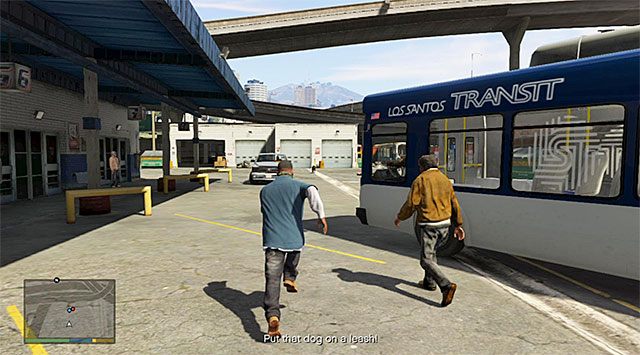 The first part of the chase

Although the chase will not end up in a failure right after you hit something bigger, try not wasting the van that you are driving and cover the route without flawlessly. After several moments, you will reach an accident site. Get out of the van and follow Chop. It is a good idea to use active sprint here, by tapping the run button rhythmically. Follow the dog and jump over the fence along your way. A bit further, you will have to cut through a wooden fence. Turn right and run towards the depot. Soon, another cutscene will start. 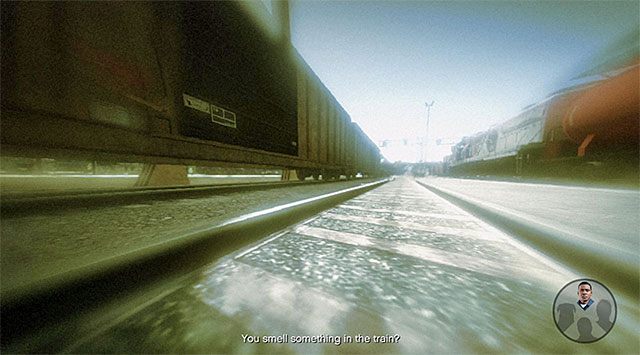 The view on the attempt, by Chop, to find the gangster

Follow the game's suggestion and cut to Chop. You will not be able to control the animal directly, but instead you will gain a view of how the dog is trying to trace the gangster. Wait for Chop will stop at one of the railway cars, cut back to Franklin and open the car. 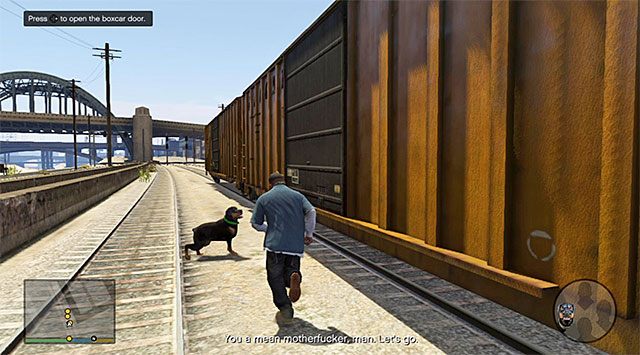 The car that the gangster is hiding in

Cut back to Chop and wait for him to reach another place. Ahead of you, there is a quite funny scene because, after Chop returns to Franklin, you will have to drag the dog away from another dog that he was going to copulate with. For the last time, cut back to Chop and wait for the animal to stop at the next car. Once again, take control of Franklin and open the car. 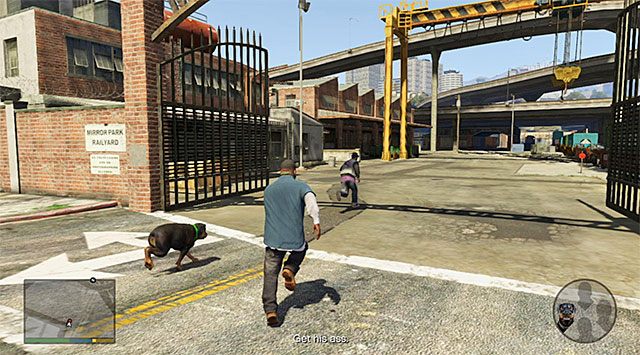 The final part of the chase

You can now resume your chase after the gangster, who has been hiding in the car. It is not going to take long because Chop will soon get the victim and bring him down. Wait for Franklin to get into the van and drive towards Lamar's hideout. During the ride, your character will decide to liberate the freshly-apprehended gangster so, the only thing left for you to do is take Lamar to the Recreational Center.

Rewards and challenges in mission 4 - Chop