This page of the guide to Grand Theft Auto V has a walkthrough for mission 3 - Repossession. You will learn how to sneak into the hostile territory, eliminate all enemies and complete the chase sequence.

Way to unlock: You need to complete Main mission 2 (Franklin and Lamar). Wait for a phone call from Simeon Yetarian, answer it and listen to the conversation. You can now go to the car dealership to start the mission (letter S on the world map).

Additional information: While playing this mission, you will take part in your first shootout but, again, you do not need to get prepared for that in any particular way, because you will receive automatically the weapon that you need to dispose of all of your enemies. At the same time, it is worth noting that Franklin will be, once again, accompanied by Lamar during this mission. 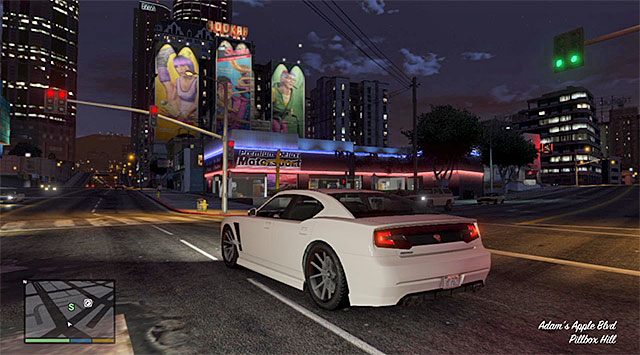 It has already been mentioned, in the introduction, that to start this mission, you need to return to the car dealership owned by Simeon Yetarian's, which you already had the chance to visit towards the end of the first mission. The dealership is marked on your map as S and it is located Northwards of Franklin's house. After you reach the dealership's region, park your car in the alley at the back of the building and enter through the garage. Watch a cutscene that is an introduction to this mission. 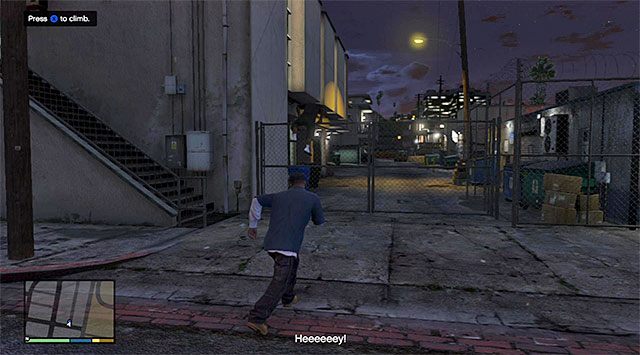 Exit the dealership building and get into a car (e.g. the one owned by Franklin) and drive to the location where you are supposed to steal the motorbike, i.e. to Vespucci Beach. After you get there, park your car near the small circle marked by the game, get out of the car and go left. Approach the fence and press the correct button to hop over it. 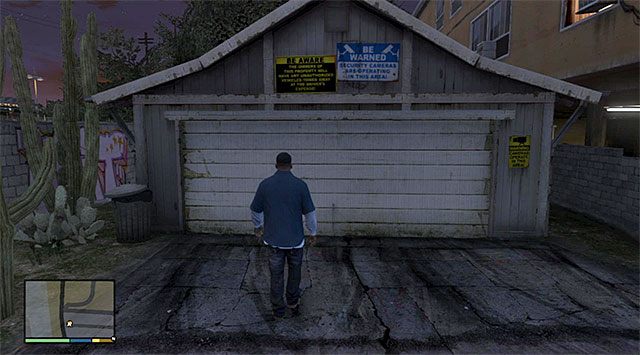 The garage to the right

As you go along to the garages located at the end of the alley, remain within short distance of Lamar. Do not attempt to run and do not get too far away from your ally, because otherwise you can alarm the neighborhood which will result in the mission's being failed. Stop after you reach the garages and explore the area to the right straight away. This will result in the initiation of a cutscene of an encounter with the hostile gang of Los Santos Vagos. 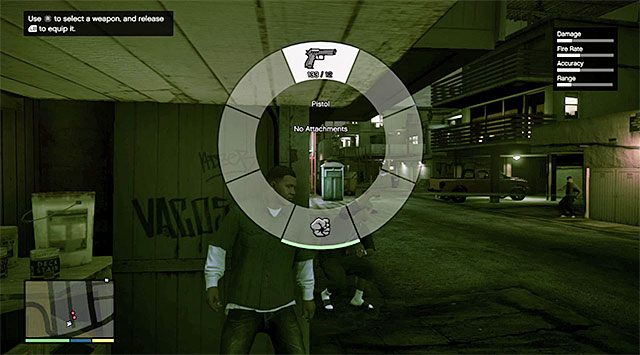 Right after you regain control over Franklin, run up to the pistol on the ground to pick it up automatically. Bring up the weapon selection dial now (by pressing and holding down the correct button) and select this weapon from the list (pistol). Note- if you already have some better weapon, you, obviously, do not need to use the pistol. Still, it will suffice for the task of eliminating the hostiles. 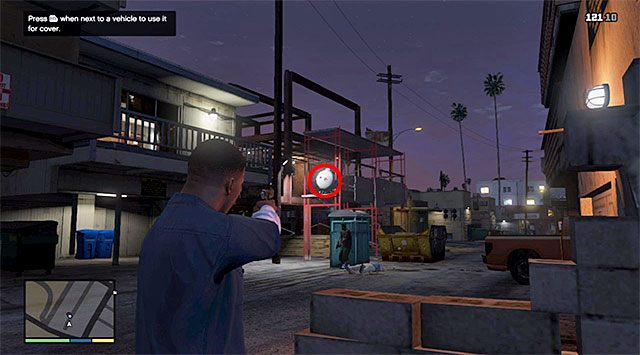 Quickly, position yourself next to the garage's wall to prevent taking damage unnecessarily, as a result of staying out in the open. Shoot the Vagos gang members that are standing the closest to you and, to the extent this is possible, target their heads. When the moment is right, target the gas tank shown in the above screenshot, which will result in a big explosion. Also, watch out for the new gangsters, who have appeared up on the balconies of the building to the right. 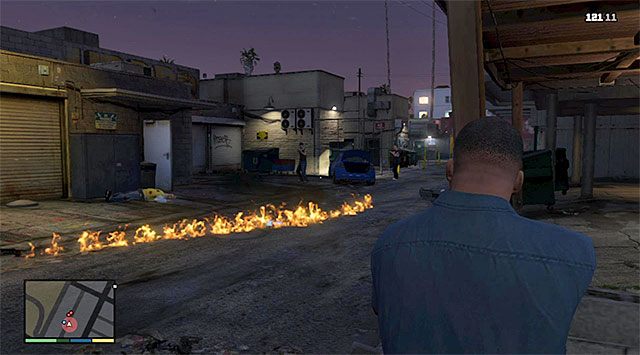 The enemies will soon try to flee on one of the cars parked near the alley. First lay fire on the car, and then send a single bullet into the fuel trail that trails behind it, which will result in the explosion of the vehicle. You can now return to the location that you parked the car in. Jump over the fence, get on the car and start chasing the character escaping on the motorcycle. 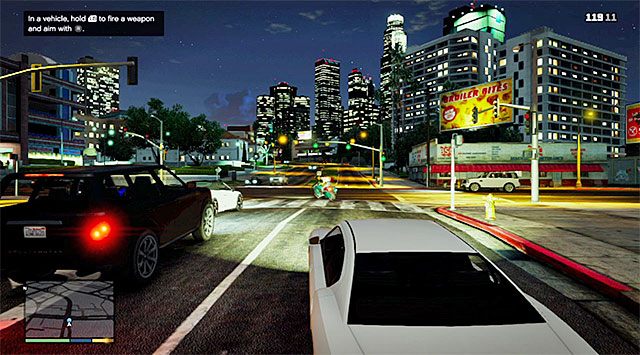 During the chase, try and avoid bumping into the other cars. Shorten the distance to the motorcycle that you are chasing and initiate Franklin's special skill, i.e. slowing down of time. Press and hold down the button as prompted by the game to stick your head out through the window and start firing with your pistol. Try to hit the biker (the above screenshot), which will conclude the chase. The only thing left for you to do is approach the bike (Western Bagger) and ride it to the location where this mission finishes, i.e. the Car Wash located close to Franklin's house.

Rewards and challenges in mission 3 - Repossession

Rewards for the completion of the mission: none (when it comes to the bike that you have just stolen, you will receive it from Lamar, later into the game, as a gift, a fact which you will be notified of with a text message).