Way to unlock: The mission starts automatically after the game is launched.

Additional information: This mission not only constitutes the introduction to the game proper, but will also help you get acquainted some of the most important mechanics at work in the game, like participating in shootouts, driving vehicles and switching between the playable characters. You do not need to prepare yourself for this mission in any particular way, because all of the new elements of the game will be presented to you on a regular basis. 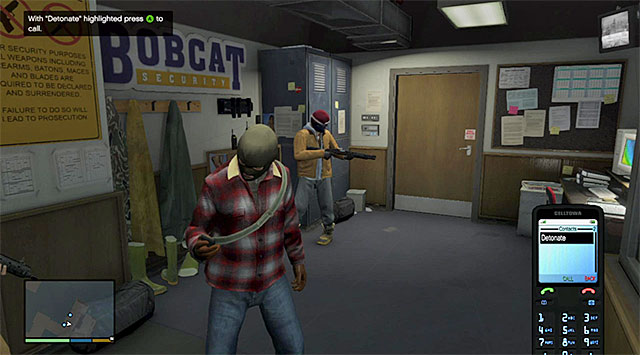 You need to use your phone to detonate the charge

You start off by controlling Michael, temporarily without the possibility to cut to Trevor. Acquaint yourself with the radar, enter the room where the hostages are being held. Aim your weapon at the hostages (do not shoot) to make them walk over to the neighboring storage room. After that, select your cell phone from the inventory, select the default Contacts tab and confirm the remote detonation of the charge (Detonate), which will unlock access to the vault. 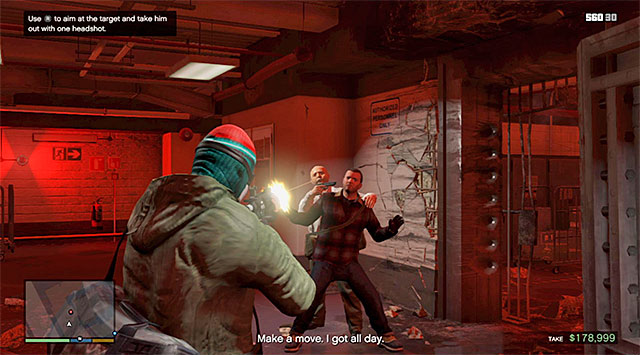 Follow the linear corridors to the vault and enter. Approach the table marked by the game to collect money. Try leaving the vault, which will result in Michael's being apprehended by one of the guards. Do not worry about that, because this scene is a part of the tutorial that is supposed to acquaint you with cutting between the playable characters. Press, and hold down, the correct button on your game pad, select Trevor and release the button. After you cut to Trevor, aim at the guard's head and kill him. 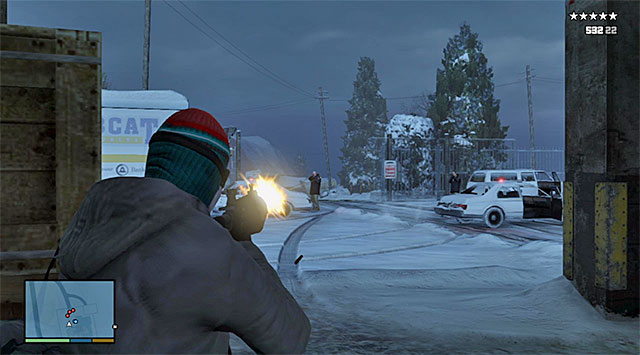 The shootout on the yard in front of the bank

Resume your march towards the building's exit and learn, along your way, how to use covers. After you are out in the parking lot, in front of the building, hide behind the nearest cover and start eliminating the police officers in this area. You can keep playing as Trevor but, if you want your aim and your shooting to be more precise, cut back to Michael. Regardless of the character that you have chosen, keep killing the policemen the closest to you in the first place, thus preventing them from coming closer or flanking you. 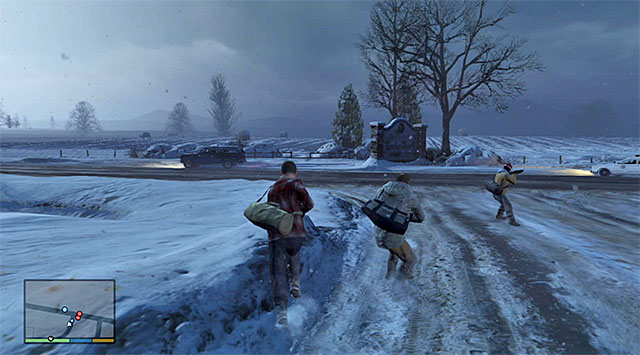 The car that you are going to use to flee

Soon, you will have to walk along a gravel road towards the trunk road. It is a good idea to sprint here but, remember that you also need to keep eliminating the police officers and hide behind cars or other effective covers, whenever necessary. After you reach the abovementioned trunk road, eliminate the last group of police officers and run up to the vehicle that stopped on the left, to get into it. 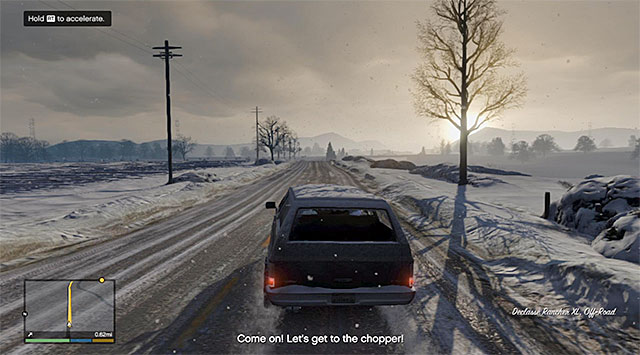 The road towards the airport

Ahead of you, there is the first scene in which you need to control a vehicle. The route towards the airport is simple, because all you need to do is drive straight ahead and take a turn to the right only after you get near a police road block. Finally, you are going to watch a short scene , during which you will have to control Trevor. Continue your fire from behind your cover to eliminate the incoming police officers. The game will soon start another cutscene and the prologue will end.

Requirements for the completion of the mission in 100%: There are no additional requirements to this mission so, it is completed in 100% automatically.