A) Main road leading to the dam and the power plant

This time you won't be allowed to choose between two different drop zones. As a result, the first part of this mission is going to have a very linear structure, mostly because there's only one road leading to the power plant area. Thankfully, you will be rewarded with more routes later during the game, because you'll be allowed to use tunnels instead of the main entrance.

This is going to be a long and very challenging mission, so it's going to be very important that you're ready for it. I wouldn't recommend exchanging your default guns, however you could leave one of the pistols and upgrade your main weapon instead. For example, you could attach a Front Grip to your main weapon. Don't leave your second gun at the base, because you might need it, especially since you will probably use a lot of ammo during the fights. Also, make sure that at least two of your squad members (including the team leader) will be carrying ZEUS rocket launchers, because you'll need them to take out enemy gunship. As for your squad, I'd STRONGLY recommend taking a sniper character for this mission. You're going to need his help, especially on the dam and while trying to reach the power plant arena. He should replace one of the Rifleman units.

Red arrows represent suggested routes to all of your main goal areas. Check the main description for this mission if you want to find out more. This picture was added only for a better orientation. A icon is the only possible drop zone for this mission. As a result, you will begin the game there. The exclamation mark icons represent mission goal areas. You will have to go there in order to fulfill main mission objectives. 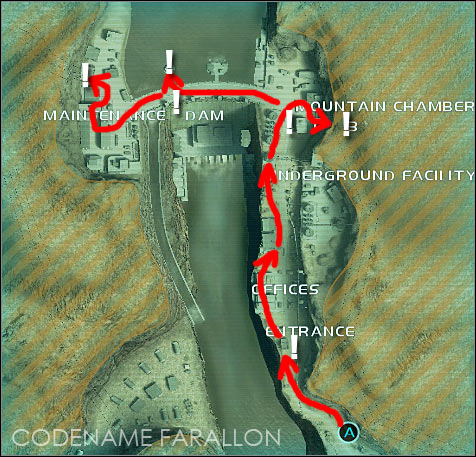