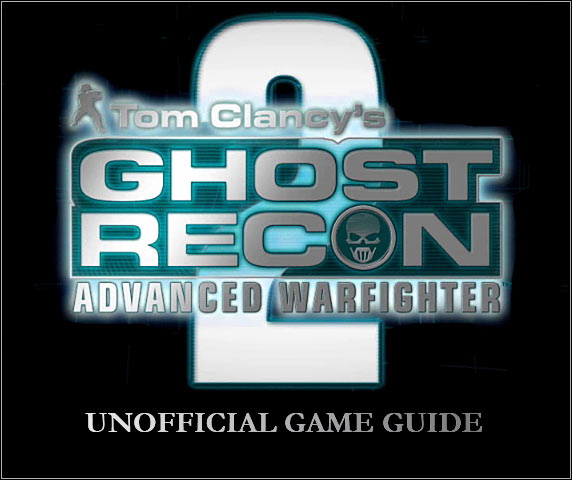 Welcome to the unofficial guide to "Tom Clancy's Ghost Recon: Advanced Warfighter 2" PC game. It's a sequel to one of the most playable tactical shooters. If you had some contact with the first part in the past, you should find some of the features of the sequel to be very similar. For example, we'll be using the exact same tactical map. This tool allows you to see your opponents and other important things in real time, so you won't have to search for these units on your own. You will also be able to use the map to command your squadmates. Thankfully, this isn't going to be the only possibility to command their movements. You will also be giving standard commands by using an on-screen menu. Additionally, you will be allowed to switched to their views in other to command them from there. My game guide consists mainly of a detailed walkthrough of the singleplayer campaign of the game. You will have to finish ten different missions in order to succeed. The campaign has been divided into three acts, so you will have to take on missions in a certain order. Thankfully, the missions are more non-linear this time, especially if you compare "Advanced Warfighter 2" to its predecessor. I've tried my best to show you a best possible route to your current destination. As a result, you won't have to worry about getting to your goal areas in time or having to take on too many enemy soldiers. This guide should be useful mostly to less experienced players. I've displayed all necessary actions, whether you're taking on a single opponent or an entire squad of enemy units.

I would also like to mention about a few other important things. Before you'll proceed with the main singleplayer of the game, I'd strongly recommend taking a closer look at the tutorial section. This mission is going to be very short, so you shouldn't skip it. In order to participate in the tutorial you would have to choose the Tutorial: Training Grounds option from the main menu. This tutorial would teach you how to use different types of weapons, including grenades, sniper rifles, pistols and rocket launchers. You would also find out about your team and giving correct orders to your teammates, however I think that you'll learn a lot more on the real battlefield, even if it would mean repeating a level. Have fun playing the game!