Available achievements: And We're Back 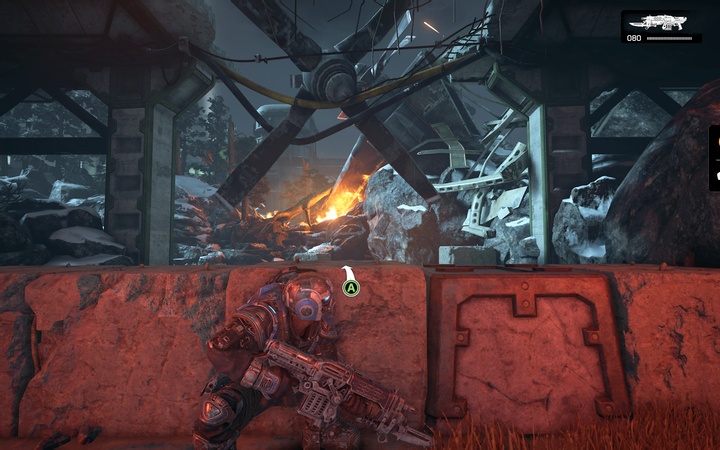 To jump over obstacles, take cover behind them and press the button once again.

There can be up to 4 players taking part in the co-op mode. If you decide to play solo, , the remaining three will be controlled by the computer AI. In the prologue, you will have several simple missions to complete; the number of opponents per fight usually does not exceed 5. First of all, deal with four of them - on and under the bridge. To hop over the barricade, you have to take cover behind it and, while leaning out, press the "take cover" key once again. 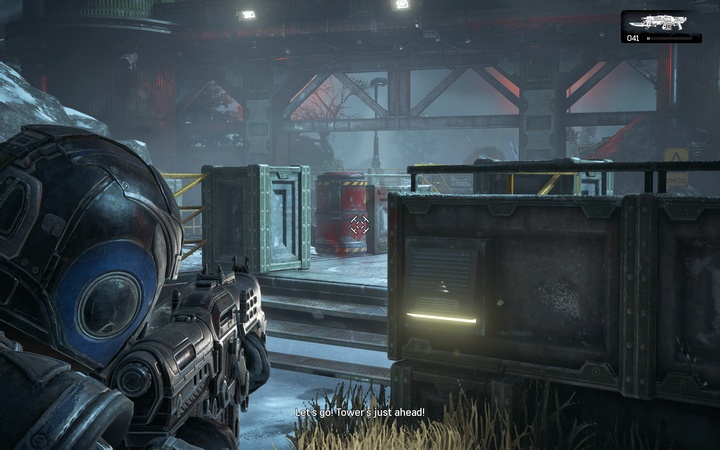 The red drums explode and they have a long radius of effect - locate them in the first place.

In the game, you will encounter traditional red drums. Fire at them to cause an explosion. Watch out because such explosion also wound your allies yet, by approaching them and holding down the action key, you can revive them. 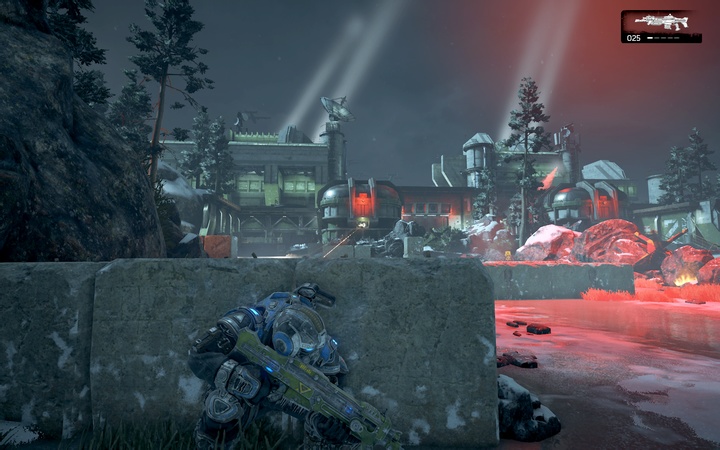 Reach the turret by dashing from cover to cover

Complete the first stage to reach the tower, with the action key, plant explosive. Now, you will have to run into the field where you will get under enemy fire from turrets. To destroy them, split into two teams of two and approach the turret whenever it shoots in the other direction. At the wall behind which the turret is located, you find frag grenades. Pick them up from the crate and throw them in, across the window. Now, you will able to cross the door. 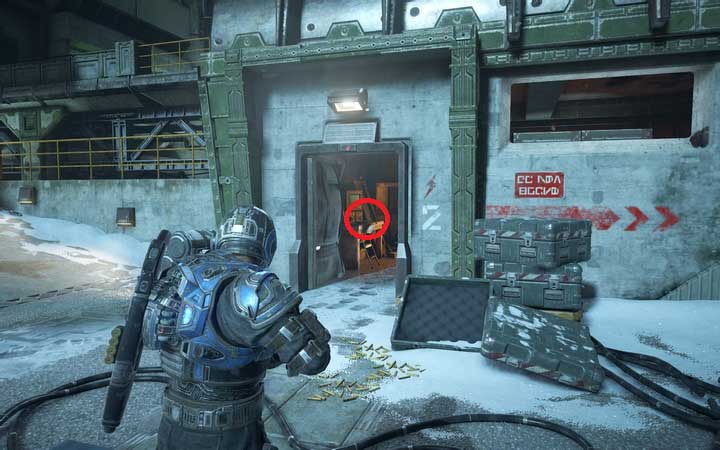 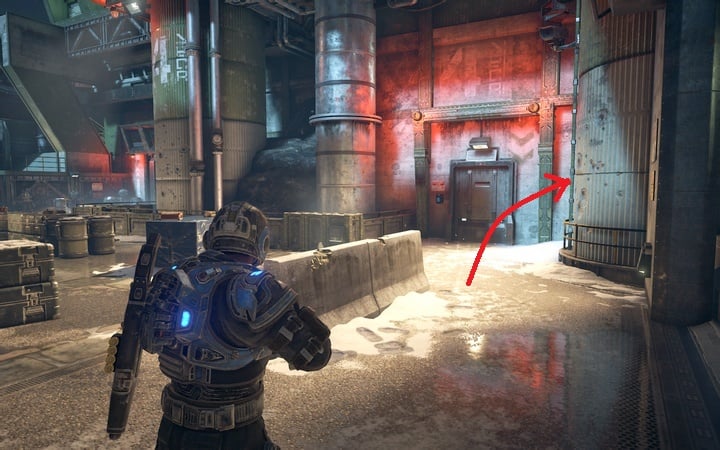 Around the corner, on the right, you will find a poster, across the door

With your team member, enter terminal codes to open the gate. After a short conversation, you will have to deal with several more opponents. To the right of the door, in the corner, there is a poster (a collectible). 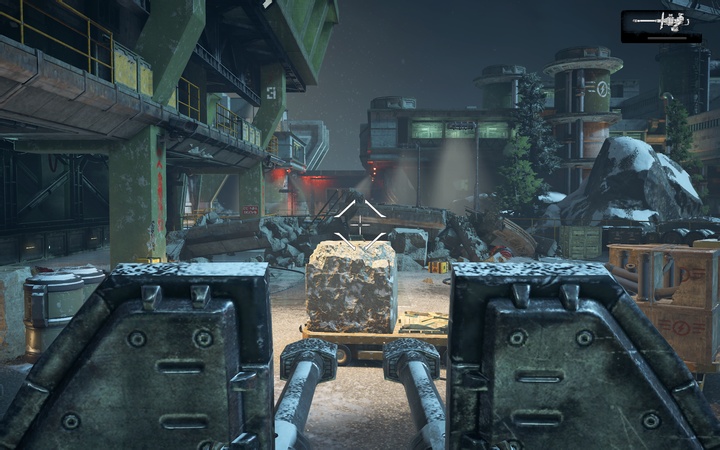 After you walk into the next arena, across the door, watch out for the turret. You can take precise range shots with the Markza Mk1 used by your opponents. After that, seize the turret and defend your positions. First of all, destroy the pillar (by destroying the drum in front of it) to cut off one of the opponents' routes and eliminate the one on the balcony. 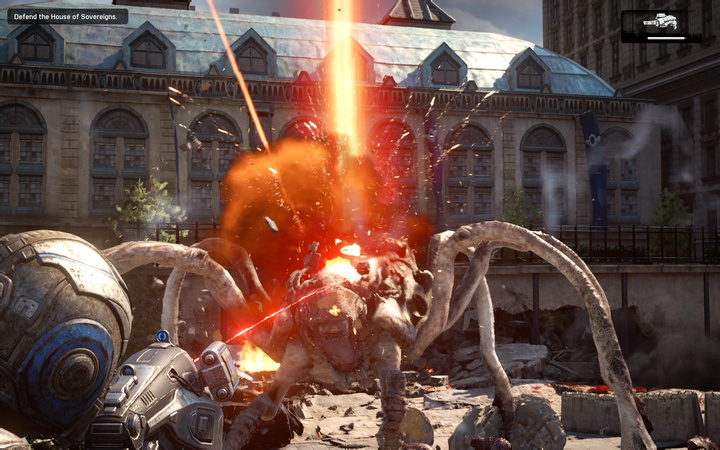 In the next stage, you will have to face a huge boss-arachnid. It is not too difficult to defeat it; three members of the team will try to handle the monster, whereas you go to get the weapon in the van (Hammer of Dawn), which allows you to engage your opponents with a beam from the satellite. Hold down the shooting key to charge the shot and fire directly at the boss. Around 5 single shots should make it take cover for a moment. However, it will be still open for attack and after around two shots, the monster will be as good as dead. 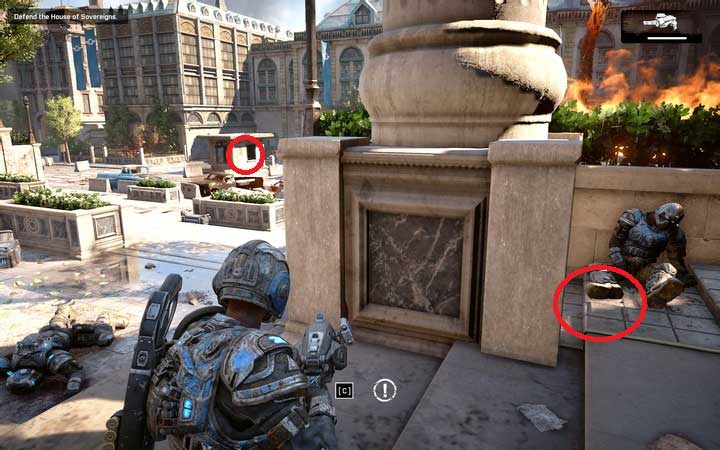 There are a dog tag behind the pillar and papers in the booth.

In this location, there are two collectibles: in the booth to the right of the road, a dozen-or-so meters in front of the monster, there are newspapers. After you get behind the van in which you found the weapon and then behind the statue on the right, you will find a corpse of a soldier and a dog tag on him.

This is not yet the end of your struggles here. While conduction defensive fire, fight back the armored opponents. Ignore the game's suggestion to use the Hammer and instead, wait for the opponents to come closer and use shotgun. You will be in need of the Hammer only after two arachnids arrive, mounted by riders. This will end your actions in this area. 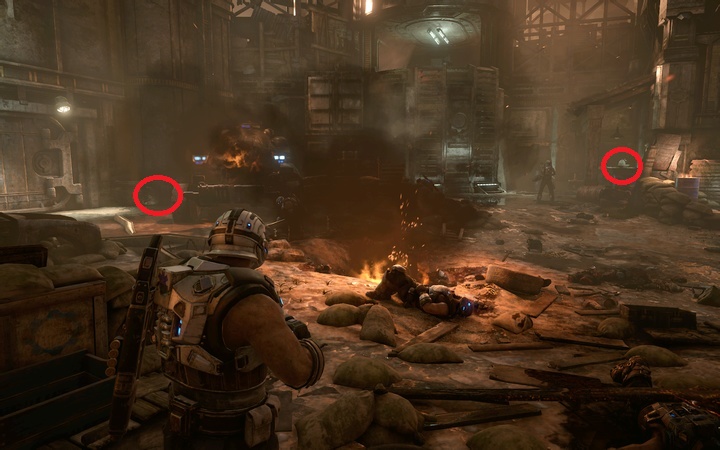 You find collectibles at the beginning of the arena

The next area is a confined space with a wreckage in the center. Walk over to the left, to the wall and, after you look left, behind the wreckage, at the wall, you will find a dog tag (on the ground, and not on the corpse) and a document on the desk, to the right before the ladders.

Climb up the ladder. Your character has been equipped with a new weapon Lancer - a chain saw, which you can use to destroy small obstacles and attack opponents. 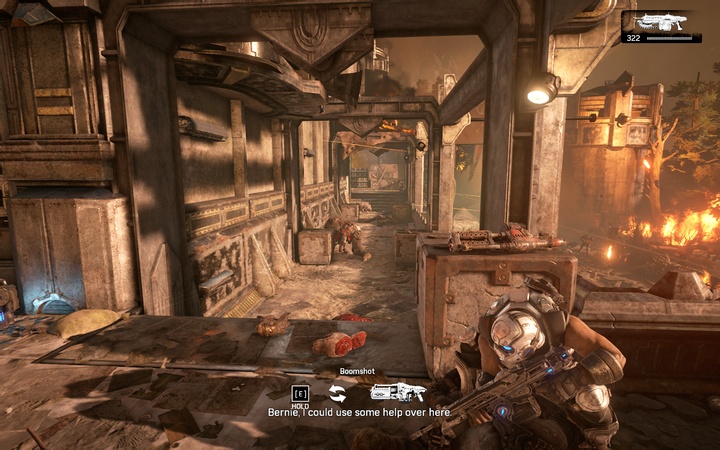 Behind the cover at the mouth of the corridor, you will find a grenade launcher

Deal with the enemies in the battlefield, locate red drums in the first place. Right afterwards, the passage will crumble and you will have to fight over a shorter distance. On the cubical foot of the pillar, there is a grenade launcher (Boomshot) - a classical weapon that will help you clear the passage faster. 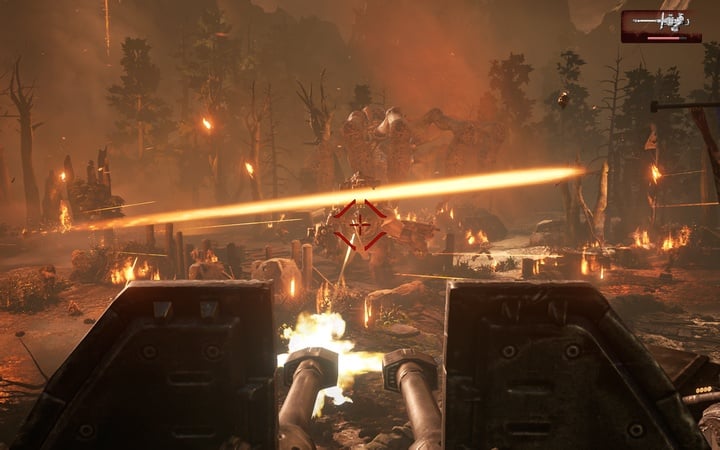 Walk over to the other side of the balcony and mount the turret. It is much more effective to fire in bursts, instead of a continuous fire. Do not release the shooting key up until the larger mutants arrive. You do not have to eliminate them all. Everything will be dealt with in the cutscene.