The beginning of the game is very important in Frostpunk. If you fail to deliver the right technology or erect the wrong type of buildings, the adventure may end very very soon. In this chapter, you will learn about laying good foundations for your city from the first minutes of the game.

What buildings should come first?

First of all, you should focus on furnishing the most basic things for the population: food and shelter. In order to do that, build a Medical Post, Cookhouse and a Hunter's Hut. They determine the Discontent/Hope levels and, consequently, your ability to run the city. Additionally, build a few Tents inside the heated zone in order to reduce the discontent caused by homelessness. During the first days of the gameplay, you don't need to have homes for everyone; it's enough to have shelter for above 50% of the population. 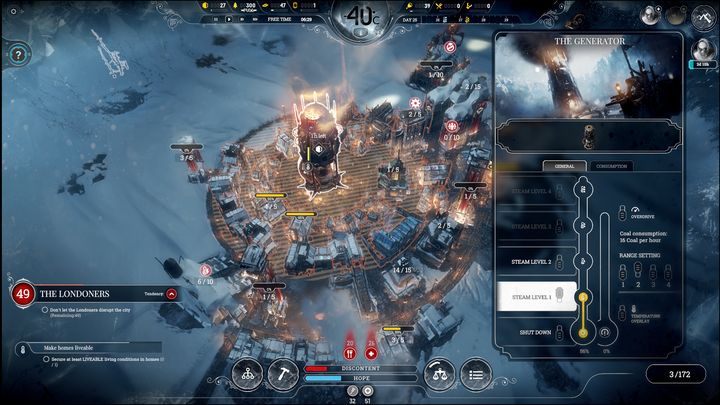 The heating area (orange) is the best place to build houses.

Initially, you only have a few buildings available - on top of that, some of them are rather inefficient. That's why you need the Workshop ASAP. It provides access to a tech tree and different upgrades.

However, catering to your population is also crucial during the initial stages. You should also start extracting resources from the main sources ASAP. The basic ones - those, to which you can assign workers - get depleted rather soon. So you should also quickly unlock the following: Sawmill, Coal Mine and Iron Mine.

It's also vital that you're able to leave the premises of your city. In order to do that, you need particular technology and have to erect the Beacon. It will allow you to create a scout group, which will be able to explore new locations that are beyond your city. This will grant you more resources and new settlers.

Which technologies should come first?

After you've got the Workshop, you will be able to use the Technology Tree, divided into 4 categories. Each technology concerns a certain aspect of the functioning of the city. The whole thing has been divided into 5 levels of development, which you also have to complete. 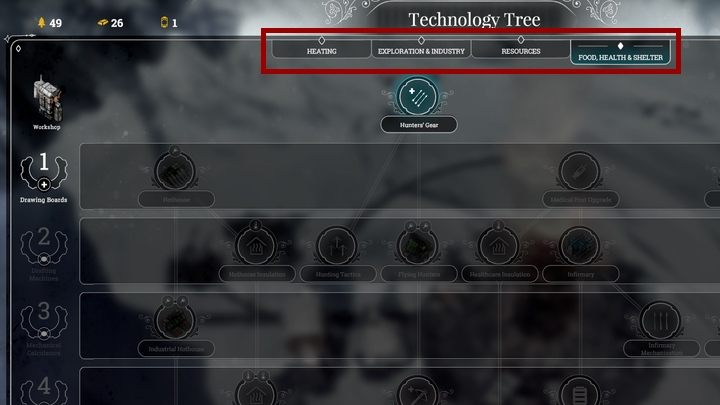 Each category of the Tech Tree is responsible for a certain aspect of the city's functioning.

Right at the beginning, you should complete the first level of research. This will let you unlock all extractive buildings - these should be the priority at the beginning. They will let you separate yourself from small and basic deposits. You'll also save the workforce, which you'll be able to use elsewhere.

Another vital point is increasing the efficiency of the hunters. This will result in the Hunter's Hut producing more food each day. This will decrease the risk of famine.

During the initial stages of the game, you should also unlock the "Heaters" technology. It will let you heat up more remote houses with small amounts of coal.

Which laws should be introduced first?

From the very beginning, you have access to the Book of Laws, which is filled with different laws that you can introduce. Each of them impacts the morale in a different way, so you have to choose carefully. 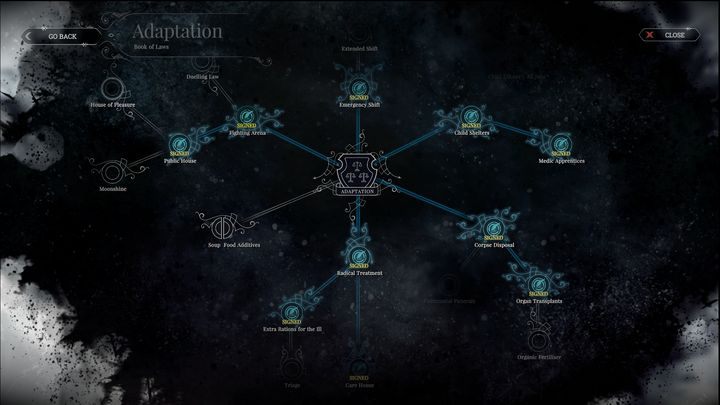 Adaptation is the essential and most complex part of the Book.

During the initial stages of the gameplay, you can access only one chapter of the Book - Adaptation. There, you will find laws that determine your approach to the population. Since the laws have a significant impact on the morale of your citizens, you have to balance this thing out well.

Emergency Shift should come first. This allows you to open any mine or plant in an emergency situation for 24 hours. This is particularly useful in the case of coalmines, which can be opened if there exists the risk of the generator going out.

Another important point is the food policy. You have two ways here: they both increase the amount of food produced, but at different expenses; the Soup law increases Discontent, while the Food Additives increases the amount of sick people. Which of these sounds better is up to you.

Also, establish laws such as Fighting Arena and Public House. They increase Hope levels, which is obviously useful.

Don't ever introduce the Dueling Law! This will lead to people resorting to violence to solve their issues - which increases mortality rates and a serious slump of Hope.