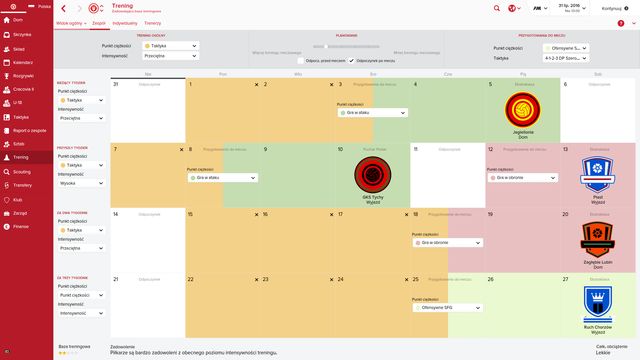 Your calendar shows you how training has been scheduled, with match preparation training and aspects trained specified.

One of the elements of the training drill is time devoted to the match preparation training. The goal of such a training is to focus on improving the aspect that is especially important for the incoming match (e.g. defensive game before a match away, against a stronger and offensively predisposed opponent).

During the match preparation training, you can focus on six individual aspects:

Match Tactics - players spend time on perfecting tactic. This type of training increases their knowledge about tactic (up to three tactics at any given moment) and this effect accumulates with the one provided by the general training. It is recommended that you get prepared in this respect, up until you attain maximum familiarity with the tactic.

Teamwork - players spend time on perfecting teamwork, which ensures better communication between players in the field. Training this aspect accumulates, at the same time, with teamwork general training. Just like in the case of tactic, it is recommended that you train this aspect up until you attain maximum familiarity with it.

Defending set pieces - allows your players to take better actions during game's set pieces. It is useful in situations in which you, e.g. lose many goals after corner kicks an the opponent has players with strong head play.

While selecting the aspect to train, you can use suggestions made by your staff and report prepared by the club's scout.

How to divide time?