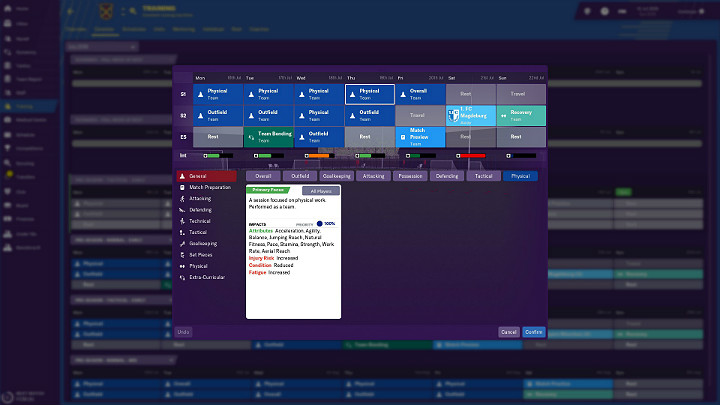 Preparing for season and general training

Preparation for the season in Football Manager 2019 is an extremely important period in which your task will be to properly implement players after returning from holidays. It is worth remembering that the players returning to the club after a long break are lazy so you should immediately take a strong charge of them and encourage them to work. Appropriate fitness and mental preparation will allow you to achieve good results at the start of the season and will reduce the risk of player injury.

Before each season or during the winter break, a drastic drop in fitness condition among players can be observed. No wonder, free time off club duties and training make your players lazy. In such a situation, it is worth to start working hard right away to make the players aware of the fact that the holidays are over. Plan the first two weeks of training in such a way that you can practice your players' stamina very intensively. If possible, keep rests to a minimum. In week 3 you can reduce the intensity of your training. You can keep it this way for about 3 weeks. The last 2 - 3 preparatory weeks should be a bit lighter, so the intensity of training should be average. Why this and not other training routine or intensity?

Similarly to stamina, morale is another factor, which is quite strong after a longer break in the league games. Players who have returned from holidays are not very motivated, and your task will be to improve the situation. Before each game, try to talk to the players to raise their morale level, which will surely translate into their results.

Training during the fixtures

During training sessions between friendly fixtures it is worth to set the plan in such a way that the players practice tactics and improve the synergy of the team. This will allow them to have a better understanding of the tactics you have set for them and they will be prepared to follow your instructions. Remember to let them regenerate and rest after the game. 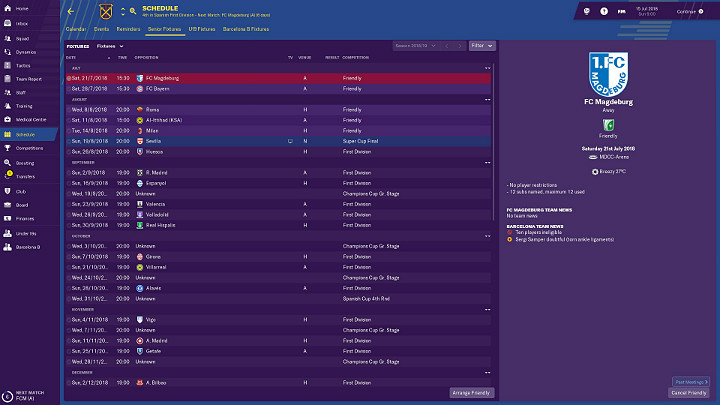 Try to plan your first friendly fixtures around the 3rd week of preparations for the season. After this time, your players should return to great shape and will be ready for the first aptitude test. Friendly fixture is also a great time to check your tactics and the last time to modify your game plan.

How to plan fixtures?

Organize the first friendly fixture inside the club with the U-23 team. This will allow you to check your players and your own tactics before you start playing with other rivals. Plan your first external training with a weak team and plan your next matches in such a way that you can play matches with better and better teams. Plan the last two fixtures before the training camp again with the weaker team to check the reserve players. This will allow you to easily win and raise the morale. Also, you will be able to select potential players for your top eleven.

Friendly fixtures will allow you to test the tactics you are trying to implement in the team. Fixtures let you to check different players and their settings. If something doesn't work as it should, it's the best and last moment to make corrections before taking a league match for "real" points.

You have already learned the strengths and weaknesses of your team. You have also got to know your players, their attributes and preferred games. Maybe you even managed to buy a few players who have strengthened your line-up. You have set up your tactics, led your team through the preparation period and played some friendly fixtures. Now is the time for the first important match in the league. How to prepare for it?

Before each match in your email inbox you will find a detailed Scout report with a lot of important information about your opponent. It's a good idea to analyze it in depth, which will allow you to adjust your tactics to your opponent.

Preparation before the match

After checking the Scout report and getting acquainted with all the information about the preferred style of play of the opponent, tactics, etc., you will be able to use the Scout report in order to find out more about the play style of your opponent. You can set the appropriate friendly fixture. Based on the information gained, set up a fixture with another team from the region in order to get to know their style of play. This will allow you to find out what to expect from your opponent.