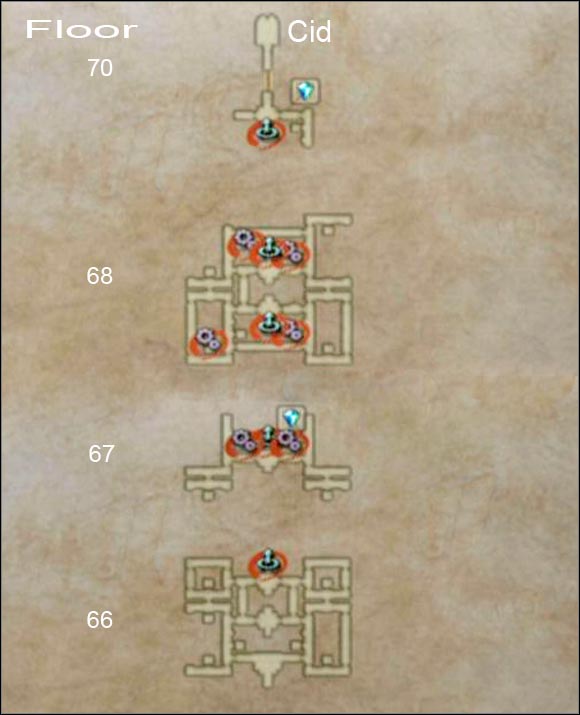 You begin on the 66 floor and no one interrupts you at that time. Someone was here before you and made short work of the guards. Run to the North Lift Terminal and use it to get to the 67 floor. There run to the north-eastern corner. There enter the C.D.B. room. You'll find there a Lab Access Card and a map.

You regain control back on the corridor. Now the time has come to get down to business - the backup has just been called and you have to take care of them before you can get to Cid. He has also turned on the security system of the Laboratory - it looks similar to the one in Henna Mines. Here are also bluish and reddish door opened by turn.

While wandering the building it's worth to visit all those small rooms (it's those small squares on the map) - you can find them treasures as well as enemies, but you can enter only these rooms from which light sift from under the door (on the left). In this building you'll also find two lifts: northern (on the right) and southern. The north one runs on the 66, 67, 68 floors and the south one on 68 and 70.

On your right you should see door (RM 6704 East) - you may enter the room and save your progress. In the room RM 6703 East a console used for opening the door can be found. Use it to get to the elevator. Use the elevator to get to the 68 floor.

Run to the south-western part of this floor to the room 6811 West and use a console there. The road to the southern elevator will be opened. Use it to get to floor No. 70. Save your progress and run upstairs. It's time to face the Cid.

Most of the attacks belong to Rooks. Regen, Curaga, Reflect, Drain, Paling (because of this one Cid becomes immune to all physical damage), they even stronger than Cid himself. Your main goal here is to dispose of them as fast as you can.