Red X is you target.

The game begins with telling you about the current situation in Ivalice. After that short introduction you take control over the action. At the beginning you're controlling a young boy called Reks. Your superior, captain Bash, will tell you how to move around and fight.

First take a look around and run to the captain [screen 1], now go to the second soldier in this area and talk to him. After this open the iron gate an open it [screen 2].

There you'll have to face a few enemies. Run straight forward [screen 1] and in the middle of the bridge you'll be attacked by the first boss in this game: Air Cutter Remora. He isn't especially though. Attack him simply with your sword, the thunder spell also works well. Pay no mind to your health level for now - other soldiers will keep you alive.

On your right side you should see a small room. Inside you'll find a Potion (you can find another one in a partially collapsed corridor). Find a staircase and go up. 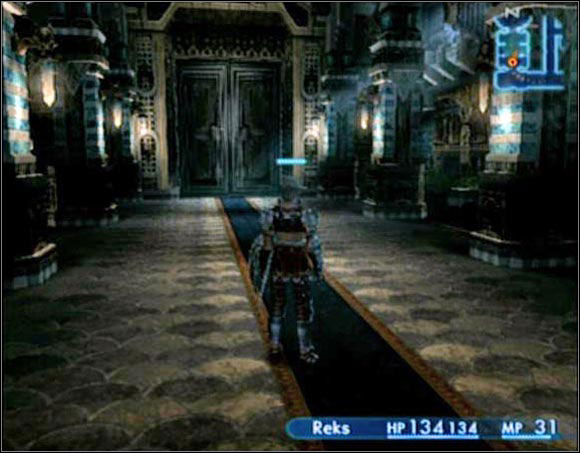 Here you'll have a chance to save your progress. Use it and run up the stairs. There you'll have to defeat three soldiers on your own. The best way to do that is to threat them first with the thunder spell and then finish them off with normal attack. While doing this keep moving so that they have hard time hitting you. After you kill all three enemies run toward the red "X" which you can see on your map.