In this chapter of our game guide to FIFA 21 you will learn what chemistry is, how it affects the players and how to achieve synergy in team play.

The FIFA Ultimate Team gameplay mode in FIFA 21 allows players to create any football team that may include footballers of various nationalities and belonging to different clubs. However, remember about the fact that too much variation may negatively affect the team's performance and therefore the players' performance. If you want every player in your team to use the maximum potential of their abilities, then they must reach the maximum rank of the chemistry stat, that is, 10 points. For this reason, the chemistry ratio is an extremely important factor in team building in the FUT 21. Here are some tips to help you build a team with the maximum level of chemistry.

Team chemistry - why is it so important?

The level of team chemistry in FUT 21 can have both positive and negative impact on your players' performance.

If a player belongs to your club from the very beginning, which means that you have obtained him in packs of cards, he will have 10 chemistry points right away. Unfortunately, it is quite different in the case of players bought in the transfer market. Players who were brought into the team will first have to play at least 10 matches (that is, play for the team 10 times) in order to earn a full 10 points of chemistry or rely on the support of the proper manager. 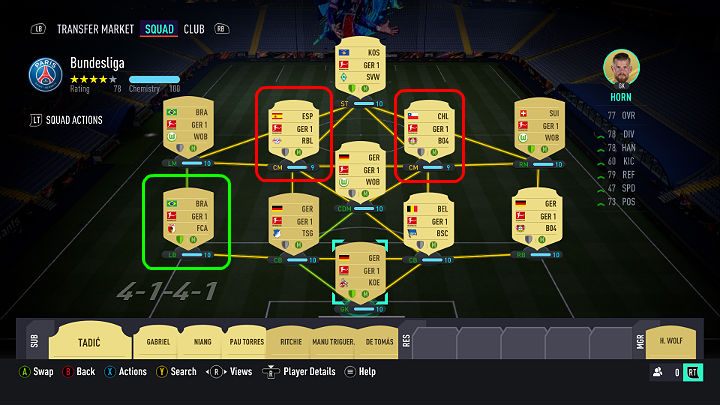 The green shield icon indicates that a player has a loyalty bonus - you can find this icon in the lower bottom part of the player's card. The midfielders highlighted in red in the screenshot above do not have a loyalty bonus as indicated by the grey shield icon - they were bought in the transfer market. The left defender, on the other hand, has a green shield icon - he was acquired in the card pack so he has belonged to the club from the very start.

This principle is particularly important when you look for players in the transfer market to solve the SBC puzzles (Squad-Building Challenges) that require a full squad.

If you want to get a full chemistry of a particular player, always try to put him in the right position on the football field (the defender must be positioned as a defender and the midfielder should play on the position of midfielders) - at least they should be assigned this way in the initial combination of the team before the match starts, because later you can freely change players' positions by using certain tactics. Information about the player's position can be found on his card, right below the overall rating. 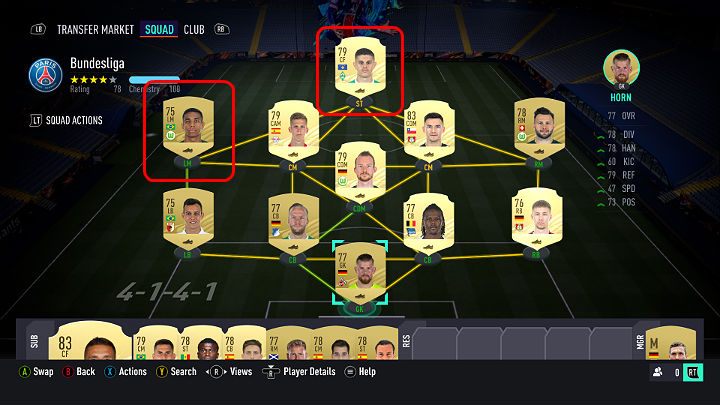 A player who has received the proper connections and configuration with the rest of his teammates will only have 10 chemistry points only if he is placed in his proper nominal position or if the chemistry points can be made up for by using a proper manager. If you put a player in a position similar to that indicated by a particular card, such as a central defensive midfielder in the position of central midfielder, he will receive 9 chemistry points.

In each team created in FUT 21, regardless of its formation, the positions of the individual players are linked. Connections between players are marked by red, orange or green lines. If you want to get a full chemistry level of a particular player then you have to combine him with players with whom he may cooperate pretty well. A player receives chemistry points from another player in several cases: 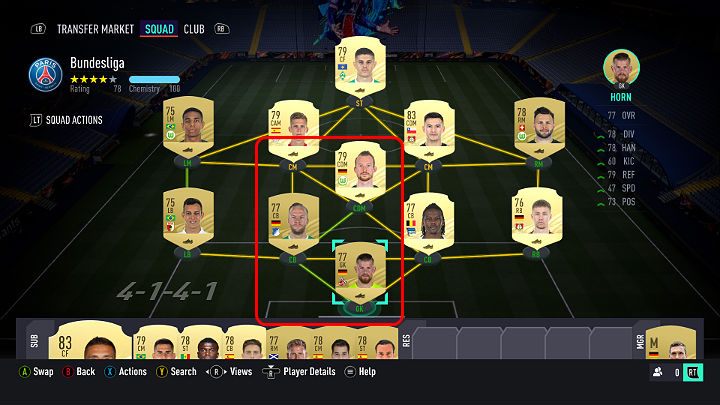 The picture above indicates footballers who have received a full chemistry and a green connection. They play in the same league (German Bundesliga) and are of the same nationality so they have a perfect combination despite not playing for the same football club.

A manager is a very important figure in any football club created in FUT 21 because he can add extra chemistry points to his players. Every manager available in FIFA 21 has a specific nationality and the league in which he works - this can be changed quickly and easily by using the league change card. What's important, the managers add 1 point of chemistry to each player from the same league and/or the same nationality (a maximum of 2 chemistry points). Due to this solution you can get the full level of team chemistry even if, for example, two players from the team have a red combination and have the so-called. off-chem. 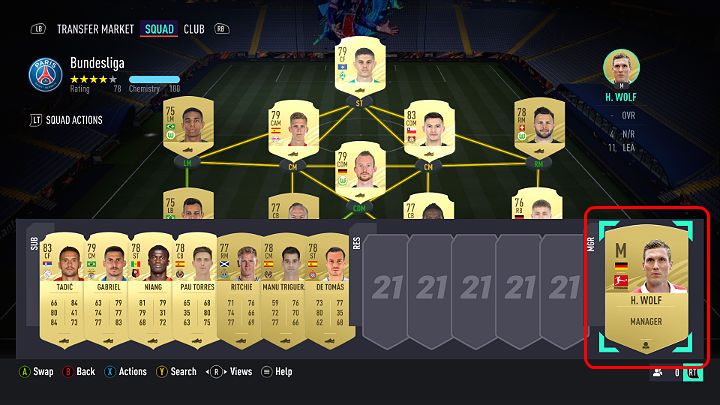