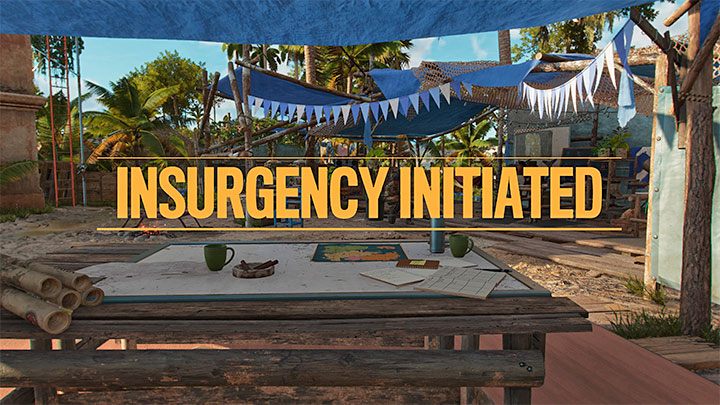 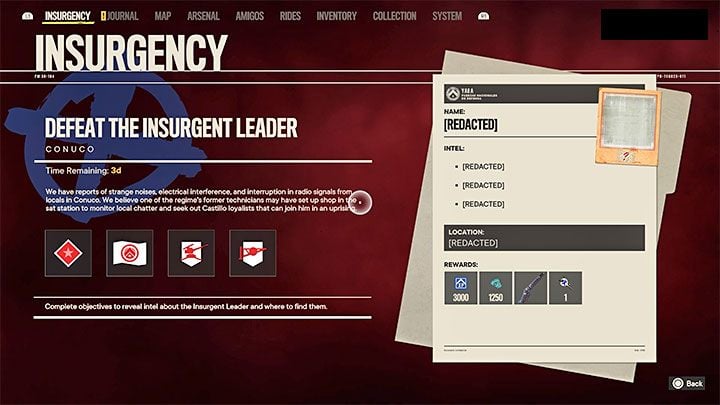 Insurgencies are a unique game mechanic that is not available at the start of the game. They're automatically unlocked after completing the main storyline. Once you have completed the main storyline, you will be able to freely explore the game world and a new tab, Insurgency, will appear in the menu window. 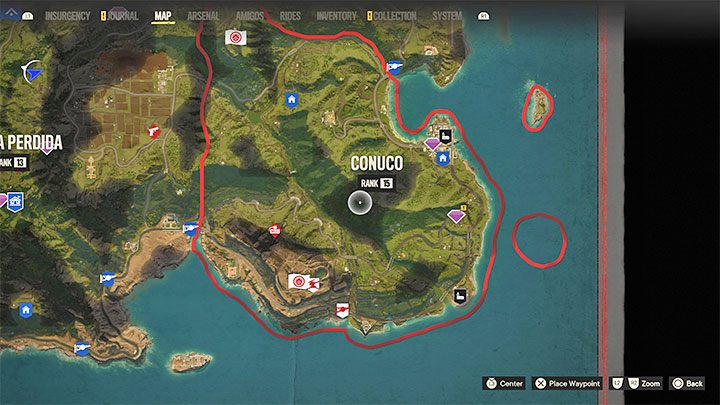 During the Insurgencies, each week, troops under the defeated dictator take over one of the map's sub-regions. As a result, enemy locations within those areas, such as FND bases, anti-aircraft gun camps, and outposts on main roads - are taken over by enemy forces. This will happen even if you have managed to retake these locations and establish the rebels there. You will simply need to wrest control over them again. 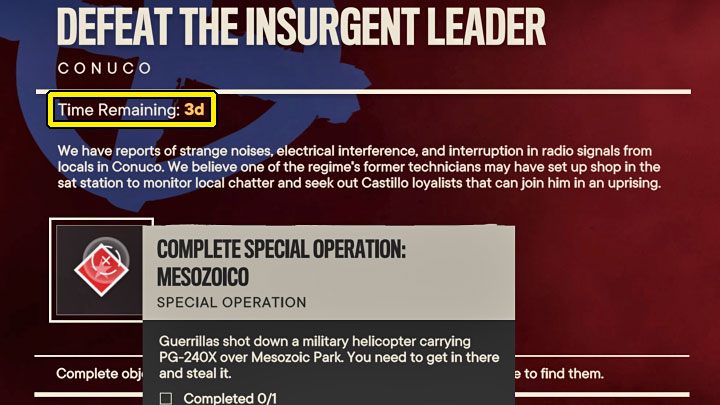 It's important to note that the Insurgencies are based on real time, i.e. they change each subsequent week (you can treat them similarly to weekly challenges). This means that:

The number of days until the end of the current insurgency and the start of the next one is displayed in the Insurgency menu - we've marked it on the screenshot.

Insurgency Leaders and how to defeat them 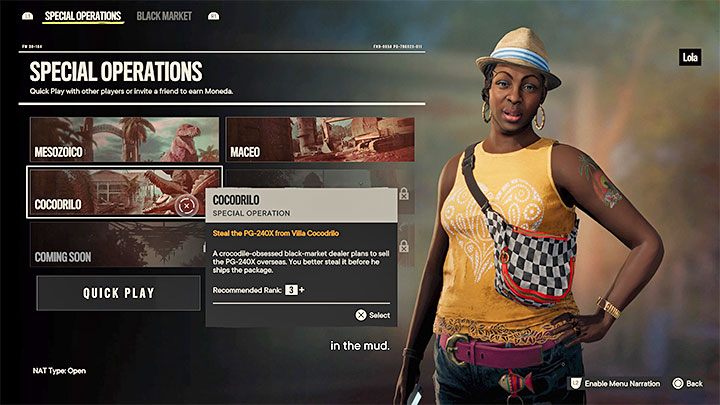 Your main objective is to identify and defeat the Insurgency Leader. You can do this by completing the task list from the bottom left corner of the screen. This includes: 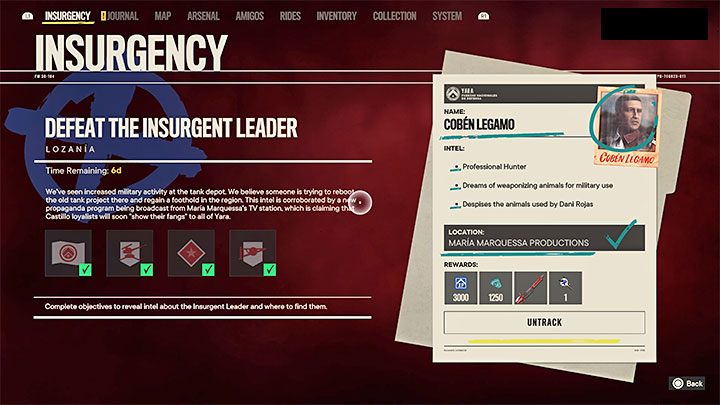 After you complete the 4 steps listed above, the identity of the insurgency's leader will be declassified and you will also learn where to find them - in one of the FND bases on the world map. 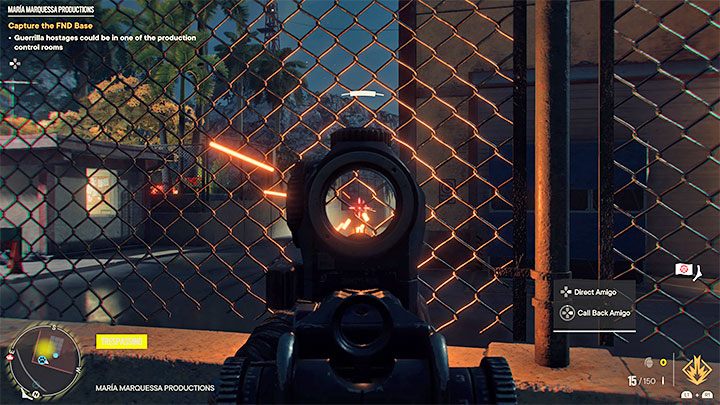 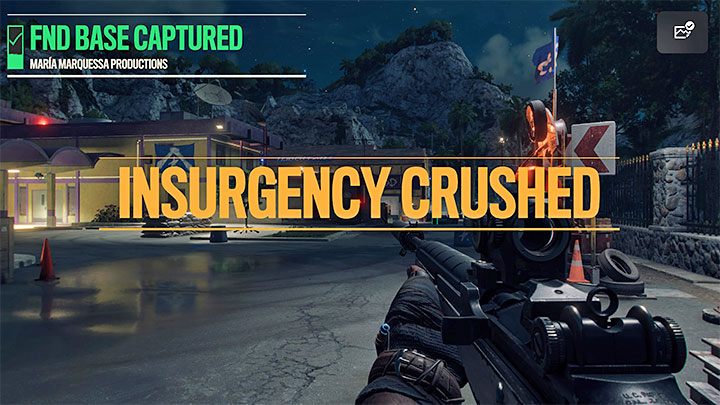 Once you have reached the indicated enemy base, simply take it over, i.e. eliminate all the enemies in the location. One of them will be the leader and you can recognize them by their extended health bar, which forces you to use better weapons to defeat this elite opponent.

Killing the insurgency leader ends your activities for the week. You have to wait until next week for the Castillo soldiers to take over another sub-region and for the search for the next leader. 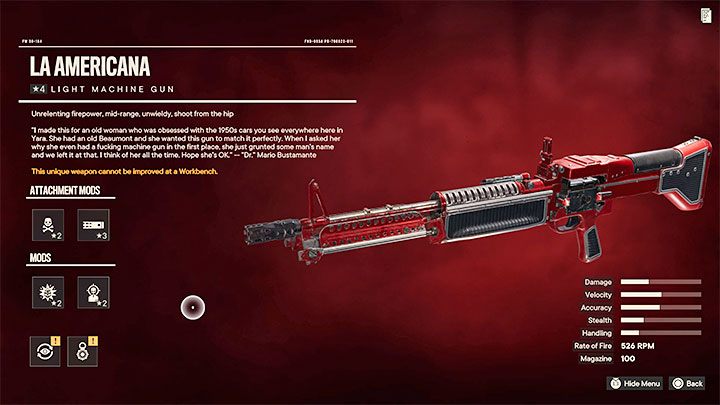 One of the main reasons why you should complete insurgencies is to regain control of enemy locations and to unlock the option to fast travel to a given region again. Additionally, you will receive numerous rewards for taking care of the preparations involved with uncovering and eliminating the leader. The most important ones are: