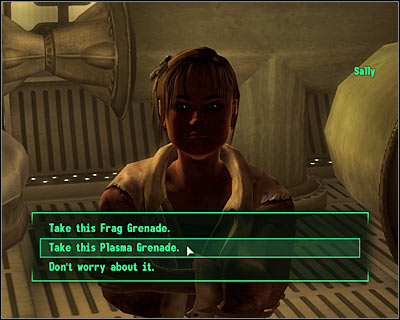 After you find yourself in an entirely new area of the ship make a few steps forward and talk to Sally again, assuming that you've agreed to her offer of exploring the alien vessel together. Look to your left and when you zoom in the view you should be able to notice a group of three alien creatures. You can take them out yourself or you can ask the girl for help in this matter. Sally can take your grenades [#11]. If you don't have any explosives from your journeys in Capitol Wasteland you can always give her plasma grenades found in the Holding Cells. Wait for the girl to enter a nearby ventilation shaft. She'll soon get closer to the hostile creatures and blow them up. Loot their bodies to collect treasures. 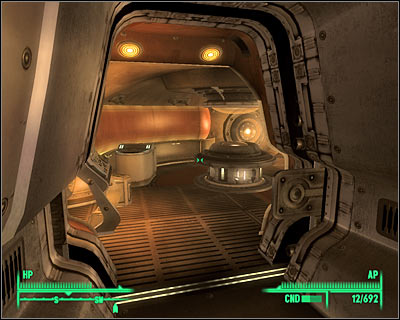 Proceed to the north and after that head west. There's a group of alien creatures in front of you. You can attack them right away or you can wait for the girl to unlock a passageway located to your left [#12]. Either way, you'll find containers with some very valuable equipment here. I would strongly recommend picking up an Alien Disintegrator, especially since this gun is equally powerful to a standard plasma rifle. You may have some problems aiming from larger distances, but thankfully most of the aliens will start running towards you instead of trying to stay away. The decision on whether you want to use it or not is up to you, however bear in mind that you'll find a lot of ammunition and you would be allowed to swap weapons often by picking up less damaged models. Ignore Alien Atomizers on the other hand, because they're crap. 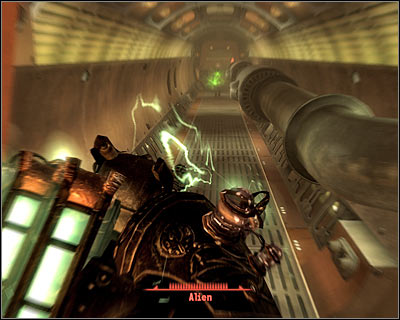 You must now make a decision on whether you want to continue following Sally's aids or maybe you want to explore the ship on your own and kill everything that will stand in your way. If you want to keep it quiet choose a smaller corridor where you'll encounter a single alien [#13]. Use a Stealth Boy for better effect, however even then you may attract other creatures to your position. If you don't have anything against open combat consider placing landmines before you attack any larger group of aliens and move back to a safe area each time you've suffered major injuries. 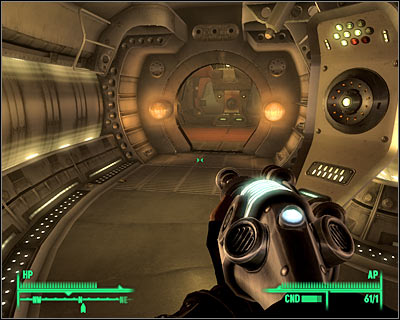 Don't forget to reload your current weapon after each fight and use items found along the way or carried from the wasteland to regenerate your health. As you've probably noticed most of the aliens leave medical supplies behind, so you shouldn't run out of supplies. One of the side corridors hides a healing archway and it would be a good idea to use it while trying to reach your current destination. Eventually you'll have to get to a corridor leading to the northern section of this deck [#14]. 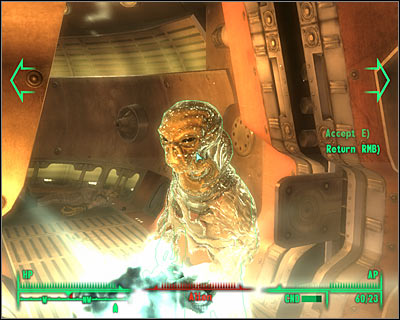 There are two ways for you to explore this area. If you've got nothing against open combat you may remain on the ground floor. Enter a large room and aside from the aliens you would also have to eliminate two drones. The biggest threat is going to be an alien surrounded by a force field [#15]. Killing this creature is not going to be easy and you'll also have to watch out for possible reinforcements appearing behind you. 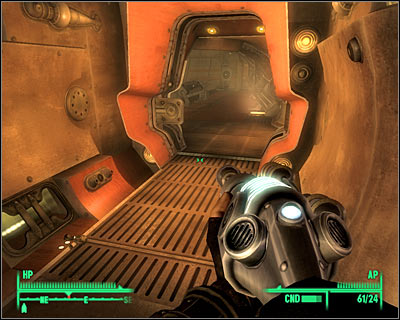 If you're a fan of a stealth approach you should stay away from the main warehouse and instead use the stairs to your left. Only one alien would stand in your way. Sally would drop a bomb on the rest upon your arrival in the balcony area [#16], allowing you to move more freely. Either way your top priority will be to reach a small exit located in the northern section of the room. Afterwards head east. 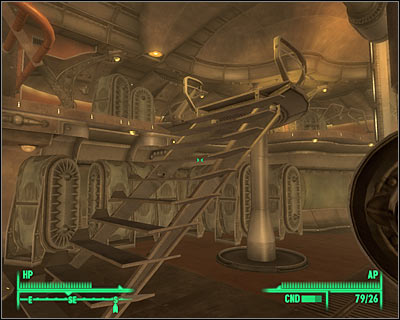 Watch out, because you'll come across an alien defense turret just around the corner. Thankfully its structure is very similar to the turrets you've been finding so far. You won't have to worry about losing a lot of health and it'll only take a few hits to destroy the target. Aside from the turret you should also be prepared to eliminate new aliens along the way. Don't forget to use a healing archway. Once you've found your way to a new room use the stairs [#17] to reach an upper floor. Hide somewhere to your left, wait for aliens to show up and surprise them if you can. 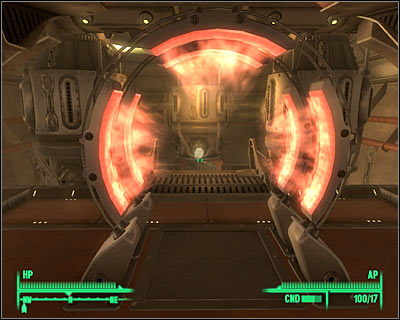 Don't forget that you should always search a new room and open all containers, especially if you don't have a lot of ammunition and medical supplies left in your backpack. This time choose the balcony leading to the north. Once you've arrived destroy a turret and then attack the aliens. All the creatures will be appearing near an archway [#18], so it should be easy to get rid of them. Heal yourself after you've won and use the stairs to head down. Watch out, because a large group of aliens is stationed in the corridor with a big pipe. Once they're gone approach the exit and locate a turret. 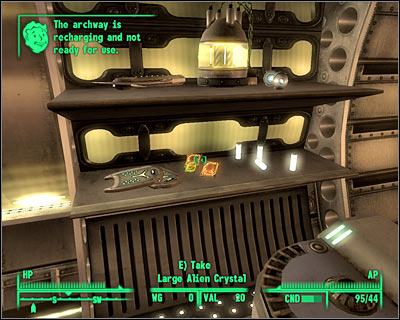 Proceed to the north-west and eventually you'll find the stairs leading to an upper level. It shouldn't take too long before you meet up with Sally. Check the north-western corner of this deck. Aside from a new healing archway you'll also come across a lot of supplies, including alien blaster cells and a lot of crystals [#19]. Return to the area where Sally is standing and proceed towards an unexplored corridor. There's one more turret here for you to destroy. Once this is done choose the passageway leading to the Engineering Core. 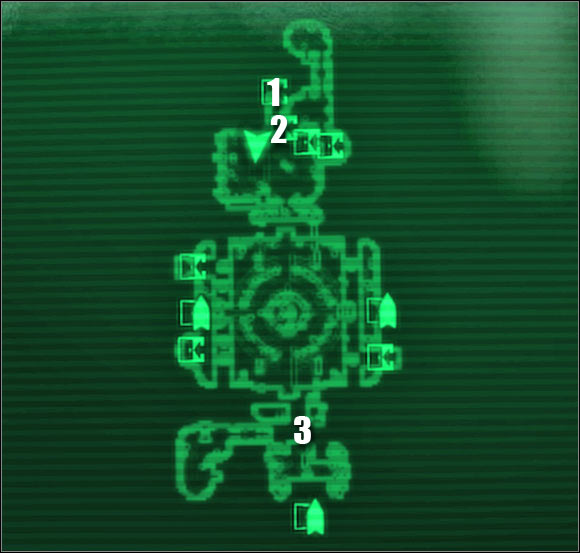 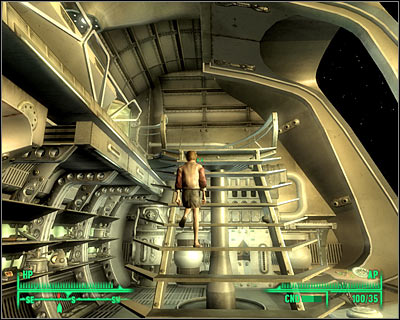 This is the main deck of the alien ship and it shouldn't come as a surprise that you'll be returning here many times in the future. The biggest news is that there aren't any hostiles here at the moment. You may as well ignore alien workers, because they're no threat to you and you would receive negative karma for killing them. You may take a while to explore the ship or you can use the stairs to follow Sally [#20]. Once you've reached the matrix listen to her comments about finding a different way to get off the ship. 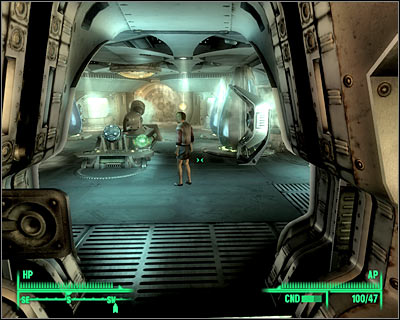 Keep following the young girl to the ship's main core. You'll then enter the southern room. Once you've arrived [#21] you'll automatically trigger a new conversation. Notice that there are some people here who were being frozen by the aliens. You'll now have a chance to wake them up. Wait for Somah to show up and soon after that you'll end the first main quest.