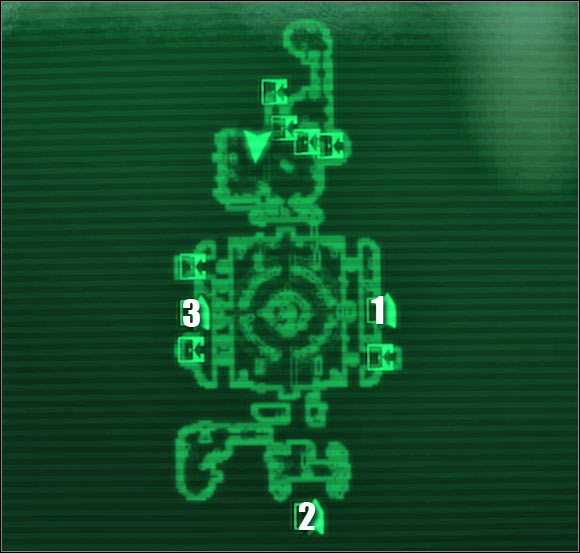 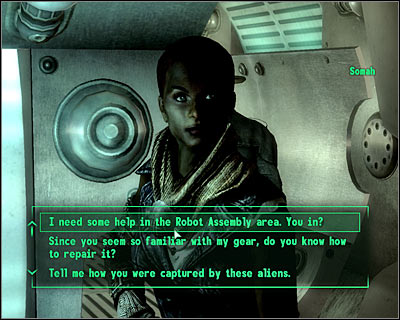 Walkthrough: There are three places you'll need to visit to complete the second main quest - Hangar, Cryo Lab and Robot Assembly. You'll be allowed to ask one follower to join you for each of these trips, but you won't choose this person on your own. Instead each follower will be tied to a certain location. You can ask someone to join you by choosing the correct dialogue option from the list [#46]. Don't forget to break up the team each time you've returned to the core. Here's the list of the people you can ask for help:

As for the order in which you should visit the locations, I would recommend going to the factory first, because you'll find a useful gadget there. Once you've been to the factory go to the lab and leave the hangar for later. Keep reading this section of my guide to find out more information on all three decks of the alien ship.

MAP OF THE HANGAR: 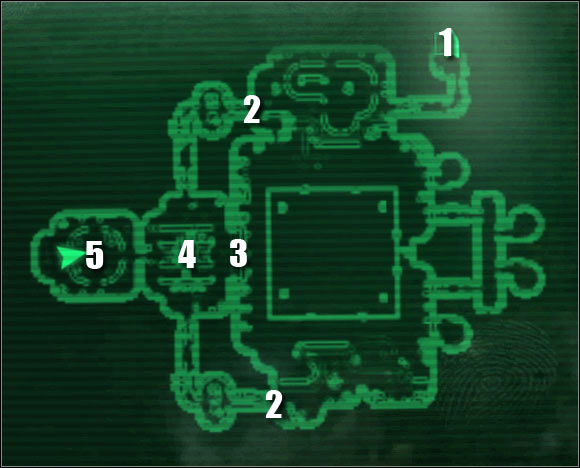 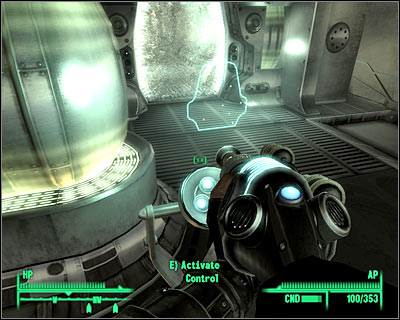 Start off by opening a nearby container in order to collect valuable items. It shouldn't take too long until you enter the largest area of the hangar. Ignore a smaller space ship and head south. Be careful here, because some of the aliens may attack you from a larger distance and you should fire back. Watch out for Paulson - he's very weak and you'll have to protect him all the time if you want him to stay alive. Once you've secured the area choose the stairs to get to a nearby balcony and find a control panel [#47] which disables a nearby force field. 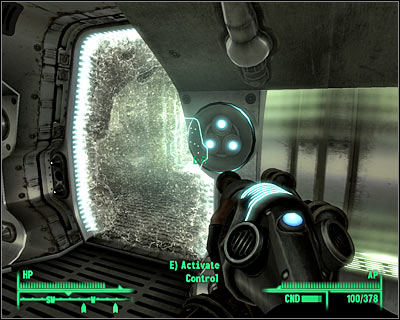 Proceed to the second staircase. This time you'll want to reach a large control room located on an upper floor. It would be a good idea to place a few landmines near the stairs. The same goes with a new staircase found to the north. Also - if you possess a device from the Robot Assembly you may take control over one of the drones located inside the hangar. Once you're ready to defend yourself proceed to your left and try using a second control panel [#48] in order to gain access to the generator room. Instead of being let through you'll raise an alarm. 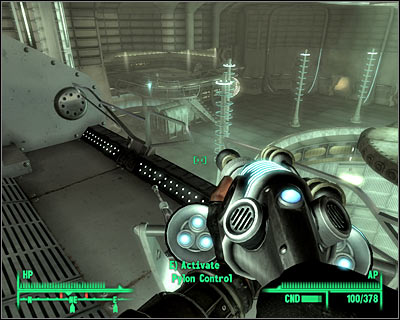 Move back quickly (to the east) and make a stop near a large opening. There are several smaller control panels here which you've probably noticed before and they can be used to activate pylons seen below. Make sure that each time you've activated a pylon one of the aliens is standing nearby [#49], so the creature will die instantly. Aside from activating pylons you should also keep using your guns to defeat the aliens. Don't forget to choose weapons suitable for long range hits. Watch out for security bots and keep defending Paulson by standing in front of him whenever he's targeted by the aliens. 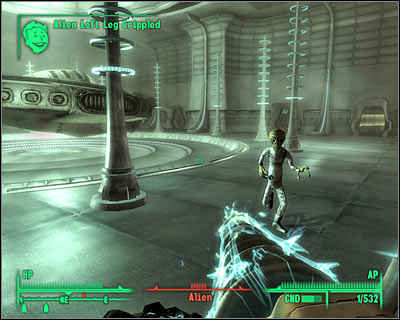 You must acknowledge the fact that some of the aliens sooner or later will find a way to get up to the control room. Assuming you've decided to place landmines many of these creatures will die near the stairs, however being cautious is a good thing. Eliminate all the aliens you can see from the top and then return to the main section of the hangar to deal with the remaining creatures [#50]. Don't forget to heal the main character and watch out while going against stronger foes. 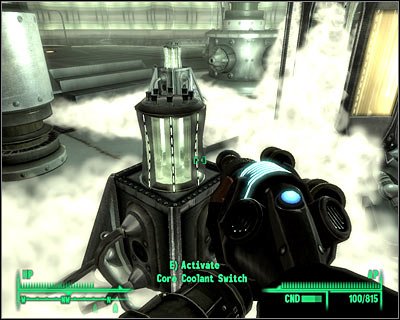 Make sure it's safe and return to the upper control room. Notice that eliminating all the aliens has allowed you to enter the generator room. Take your time to explore nearby shelves for supplies and then use the control panel to raise the core. You'll now have to interact with three coolant switches [#51] just like you did when you were trying to rescue Sally. Move back and wait for the generator to overheat. After the explosion go back the same way you came here to return to the Engineering Core.

MAP OF THE CRYO LAB: 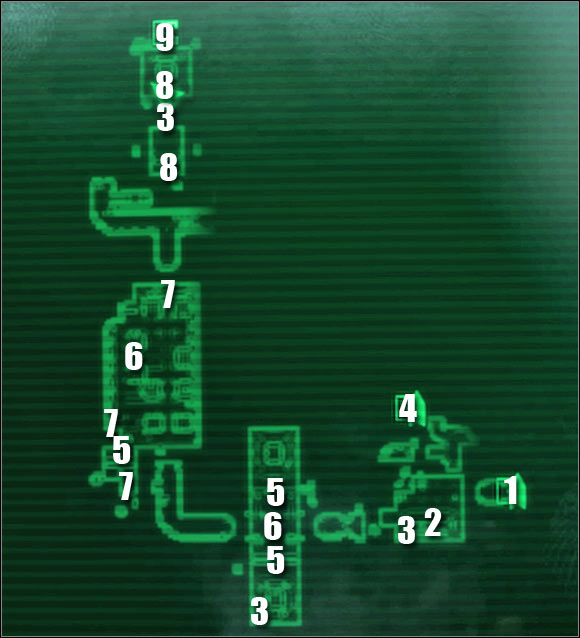 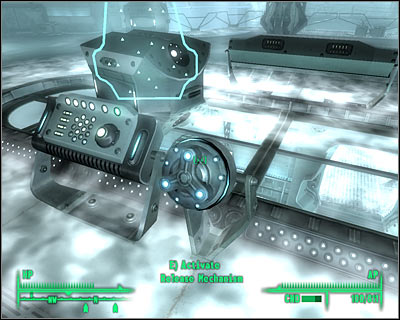 Head on towards the first large area of the laboratory where you'll have to defeat a small number of aliens. Once they're gone focus on finding a large control panel [#52]. Using the panel will shut down a barrier seen below you. Head down there and explore a small storage area. Aside from a healing archway you'll come across supplies and you'll be allowed to use the control panel to acquire a recording (#4). 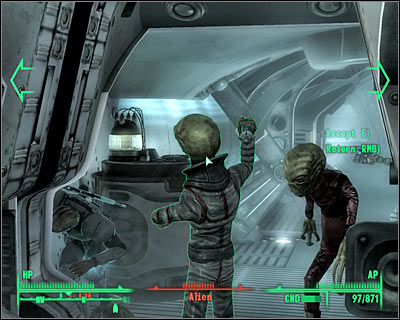 You may return to the upper balconies. There's a teleportation device nearby, but you won't be allowed to use it at the moment. As a result you should proceed towards the western passageway right away. Deal with the aliens and the drones quickly [#53], especially since your ally may die during the course of this battle. Thankfully Elliott will heal himself once it's safe again, so it'll be slightly easier with him than with Paulson. Don't forget not to attack the workers yourself, allowing Elliott to handle them. 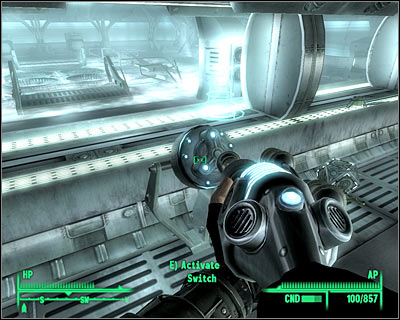 Check the southern room to find a new recording (#2). You can also use control panels located near your current position [#54]. Each time you've done that you'll kidnap random people and ghouls from Capitol Wasteland. This is a good opportunity to score bonus experience points, assuming that you want to fight wastelanders instead of focusing on leaving the alien ship. Don't forget to heal yourself before heading west. 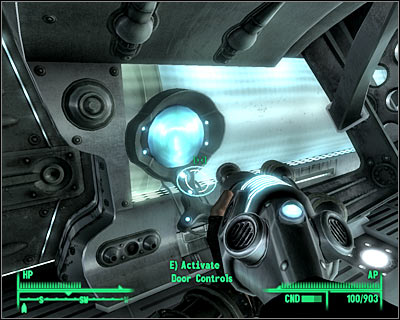 Continue moving west, however you'll soon turn north. More aliens can be seen in front of you. Deal with the situation and then proceed towards a small room found to your left. You can unlock a nearby supply room by using a control panel [#55]. There's some equipment from the wasteland inside if you're interested. A second panel will allow you to kidnap more people from Capitol Wasteland. Join the fight or remain here and wait for everyone to kill each other. If you decide to play it safe don't forget about Elliott and help him if he's in critical condition. 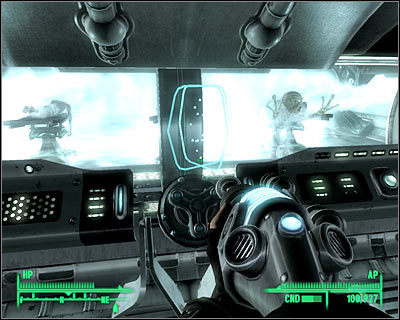 Once it's safe leave the control room and head north, using an archway found along the way. Before you decide to leave this area it would be a good idea to explore the southern and the northern section of the room. You should be able to find valuable supplies, including medicine needed to fight off radiation. Once you've arrived in a new section of the ship use a nearby control panel quickly [#56]. If you were successful you'll kill the aliens seen inside without having to actually attack them yourself.