Only one thing left to do for you - kill Jack of Blades once more. This time he appears before you as a dragon. The battle is relatively tough, but with little practice you shouldn't have any serious problems with it. The dragon has a LOT of HP and striking him down will surely take you some time, unless you can deal some really serious damage (try Berserk and 1000+ hits).

The dragon appears in various places of the arena. You can only attack him with melee weapons while he is in the central part (as at the beginning). In other cases you will have to depend on bow and Will. On the other hand, when the dragon takes a different position than the central one, he carries out some really heavy attacks and probably it would be wiser to concentrate on dodging than on attacking. From time to time he summons some Minions and Summoners, they don't seem to be a problem in here, though. The best strategy is to wait for the dragon to appear in the center of the arena and then hit him as hard as you can. Sooner or later, he'll fall. 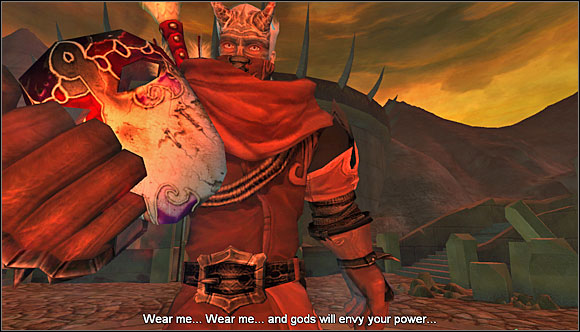 When you defeat Jack, you stand before the final choice between good, evil, and.. well, very evil. Jack's mask will tempt you Lord-of-the-Rings-style, promising power and immortality. Will you wear it, or toss it into the lava? That's your final decision.

If you want to penetrate Albion some more after beating the game, just don't skip the credits (they are like 20 minutes long). Don't expect any new quests to do, though.