Reward: 2000 Renown, the amount of Gold varies depending on how long you last without retreating to the back room.

Your successes throughout Albion have earned you a pass to the Arena. Head its way once you take the Quest Card.

The guard will let you in when you talk to him. He'll tell you some interesting things about Arena's history. You'll enter the Arena Anteroom, where you can get some supplies and prepare yourself. Equip a lot of potions and perhaps buy yourself a better armor. You'll be encouraged to enter the Arena in a few moments.

The battle consists of nine rounds. Making your way through the first one earns you 100 Gold and the stake is raised after each one of them, unless you decide to head back to the back room and recover. In that case the counting will begin from 100 Gold level again.

Each round makes you fight against 4 waves of enemies. In the first one it'll be bees, in the second - Hobbes, in the third - Balverines (you'll joined with Whisper then), in the fourth - the Undead, in the fifth - Bandits. The sixth and seventh round see you struggle against Earth and Rock Trolls.

The eighth round is a boss fight against the Scorpion King. He isn't tough at all if you know how to dodge. His weak spot is the green light on his head. Strike it whenever you can, trying to roll in and out of the claws' range.

As you might have guessed, it's not the over yet. Your final test will be to confront Whisper one last time. She's gotten better than the last time you fought her, but still shouldn't be a problem. When you hit her a few times, she will give up. You can either leave the Arena (good) or finish her (evil). You'll get some more Gold if you choose the second way. 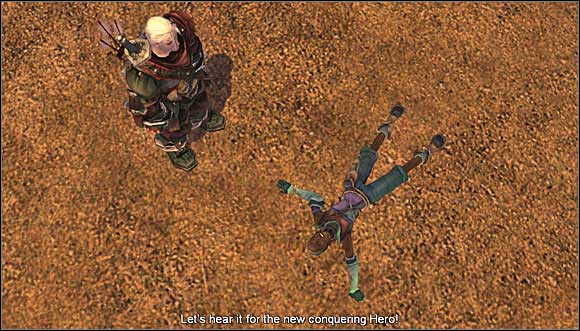 HINT: If you choose to let Whisper be, you'll meet her in Oakvale inn and find out that she decided to quit the hero job and leave for her distant homeland. That's the last time you see her.