The end of the 2022 season in F1 Manager 2022 isn't a time to relax, as you have to prepare for 2023, which requires a number of important decisions. This page of the guide shows the most important news or actions to be performed during the season break. 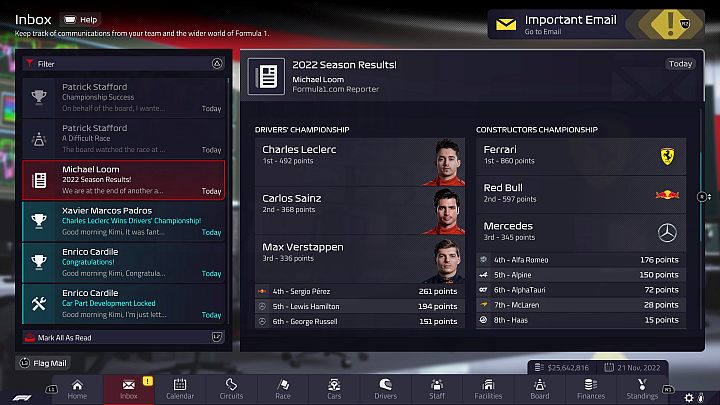 At the end of the season, you will receive a message with information who won in the drivers 'and constructors' standings.

{ramkazielona} If you won in one of the categories, there may be a problem with unlocking trophies for winning the championship correctly. This bug and possible solutions to it are described in more detail in our trophy guide . {/ Ramkzielona}

Designing and manufacturing of parts prohibited 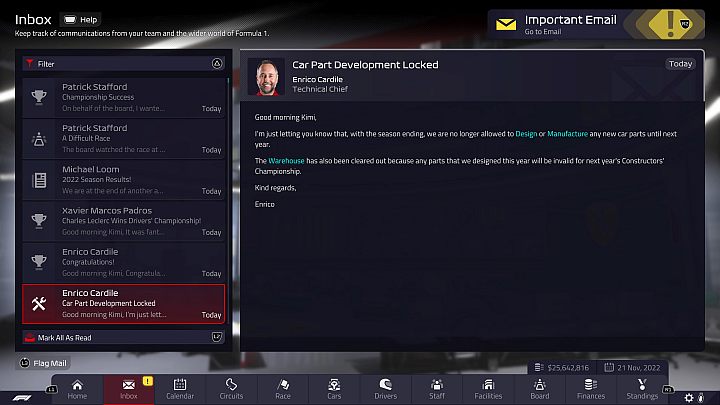 You cannot design or manufacture new parts during the break between seasons. However, previously started research projects can be completed. 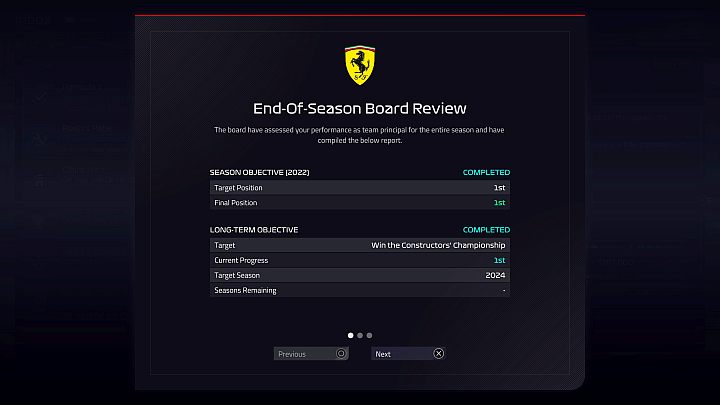 At the end of the season ,another board evaluation takes place . Your results will be compared with the management's expectations (seasonal and long-term), and your achievements from each Grand Prix will be assessed. If you've done well, a happy board may award the team a financial bonus.

Changing rules for the 2023 season 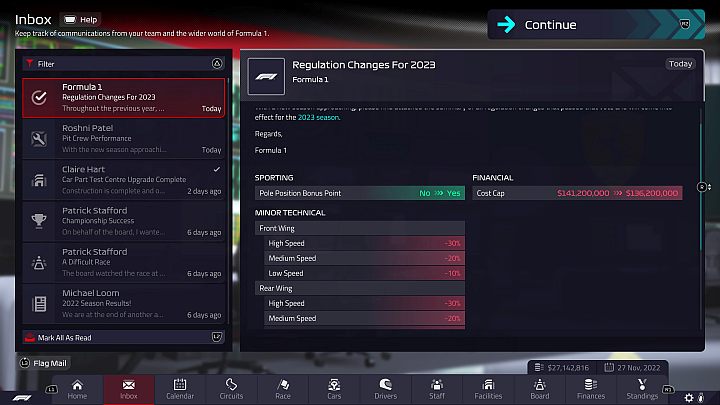 In one of the news, you will also learn about all planned changes to the regulations for the next season . These can be not only changes in aerodynamics, but also, for example, in matters of the Cost Cap or point bonuses for pole position. These are all the changes that you voted for over the course of the season (though not always the voting result had to go your way). 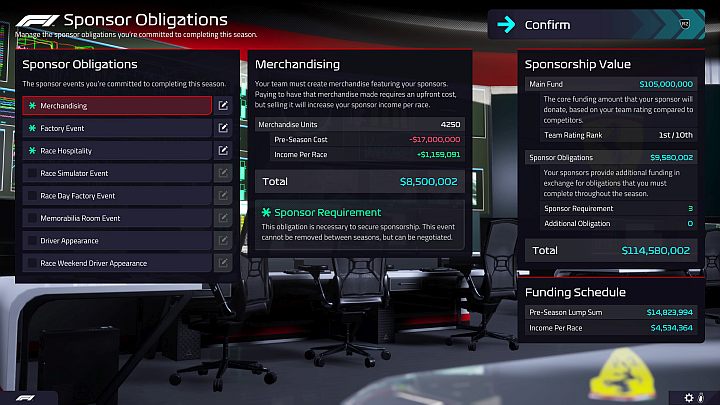 An important step in the new season is establishing new Sponsor Obligations . Some of the obligations are mandatory, and others you can add or modify.

Commitments may mean getting more money for the team, but temporarily worsening its performance. For example, for the duration of the sponsorship programs, your drivers may stop training or the morale of your staff may deteriorate. If you have a good budget, don't choose too many commitments, and if your team is poor, choose most or all of them. 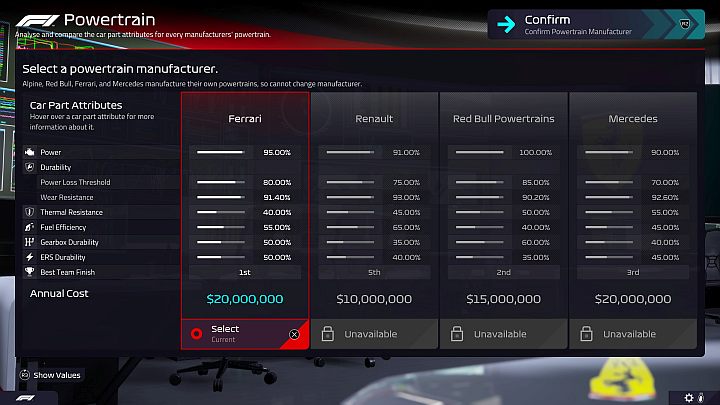 Before the new season, you have to choose an engine supplier , but the game does not always allow you to choose between all suppliers. For example, when playing as Ferrari, other teams' engines will not be available, because Ferrari itself is the supplier. 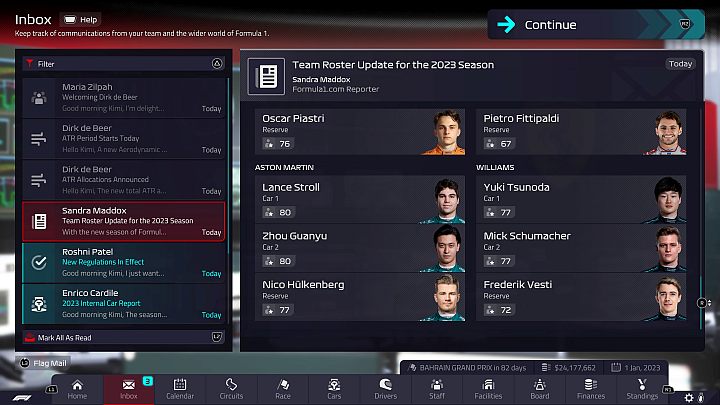 From the news you can also learn about changes in driver roster in other teams . Some of them will remain in the old team, while others may change it. The availability of drivers to negotiate may also change. 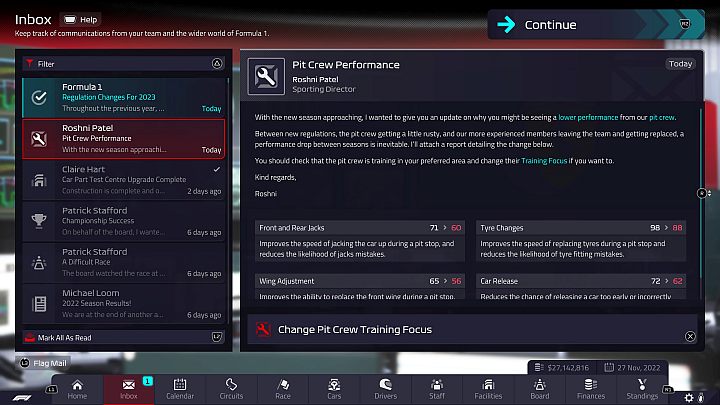 You can also learn about various smaller events between seasons.

One example is the deterioration of the performance of the pitstop crew , whose stats may be lowered. This may force you to train them further and upgrade their skills during the course of the new season. 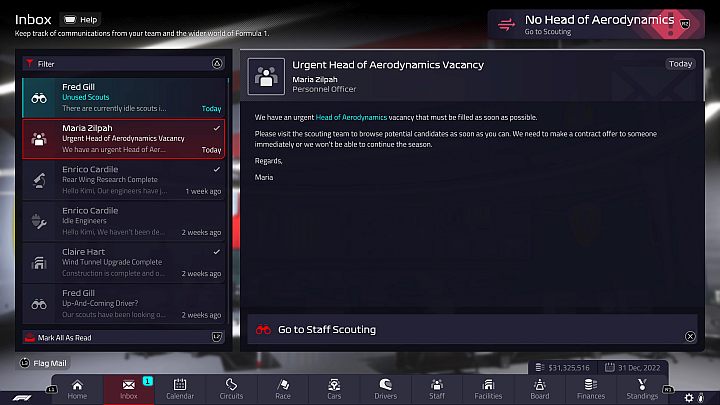 You will receive a warning if any of your key employees ends their contract . This will require finding another candidate and successfully negotiating a contract, as none of the team's key slots can remain free.