The Euro Truck Simulator 2 Beyond the Baltic Sea guide describes new countries and cities. Below is a description of Lithuania and its famous cities. 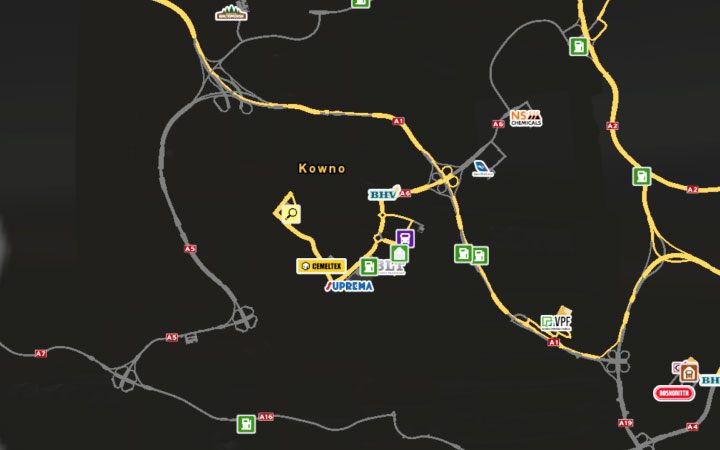 A map of Kaunas.

A relatively large city located on the south of Lithuania. It is located on the west from the highway that leads from Vilnius northwest towards Klaipeda. The road system here is dense and you can easily move in any direction you want. 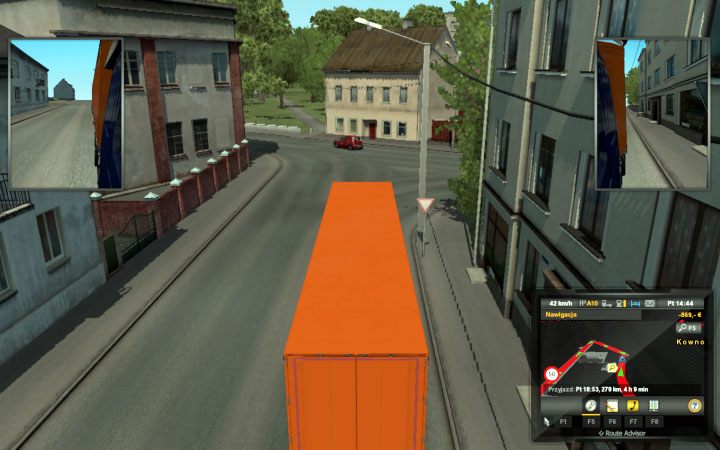 The city is mostly accumulated in a single spot. Wide roads are leading there, although there are also some narrow alleys and turns. There are garage, workshop, gas station, Renault truck dealer, job agency and four companies here. 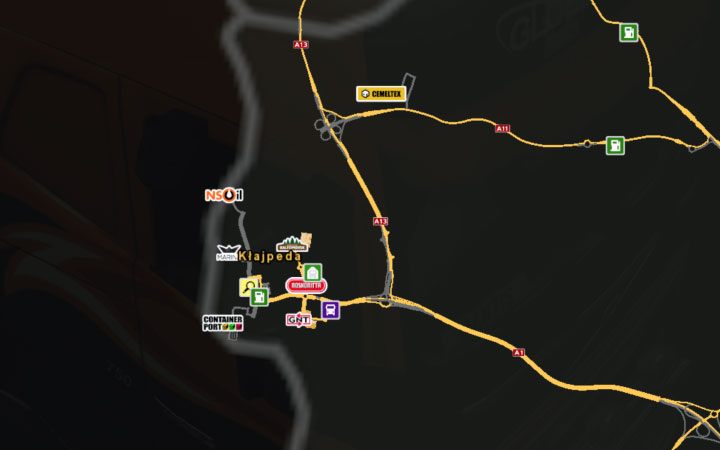 A map of Klaipeda.

A relatively large city located south from Latvia, at the Baltic coast. What's important is the fact that it is located near the main highway from Vilnius to the northwest. It is well communicated towards north and south. 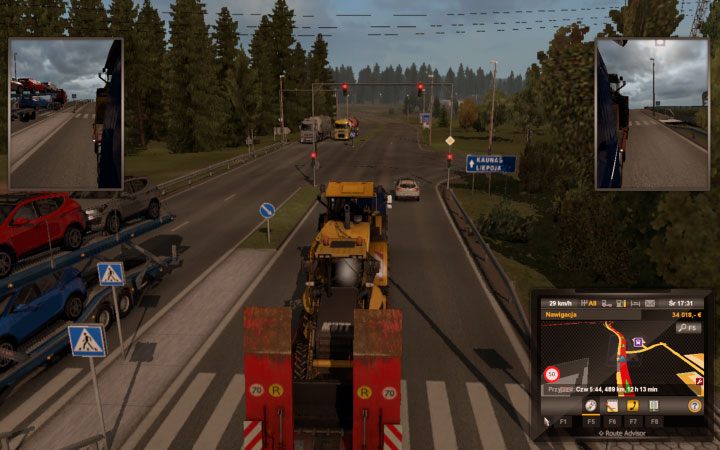 The city is very comfortable because there are many wide roads here. However, it's main advantage is the fact that everything is cumulated here and located close to each other. So, it's close from a garage towards a workshop, a parking, or a job agency. You will also find a IVECO truck dealer here. It is a good place for buying a garage. 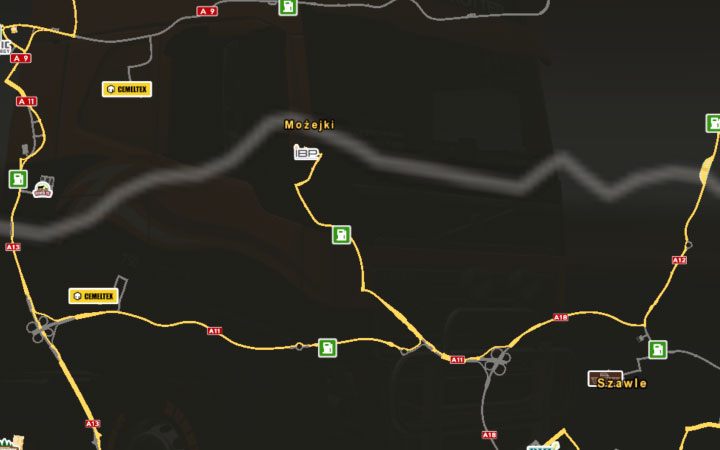 A small city located on the north of Lithuania, near the border with Latvia. Getting here isn't enjoyable. You can go here from east, from Skauliai, or from west by leaving the road that connects Liepaja with Klaipeda. 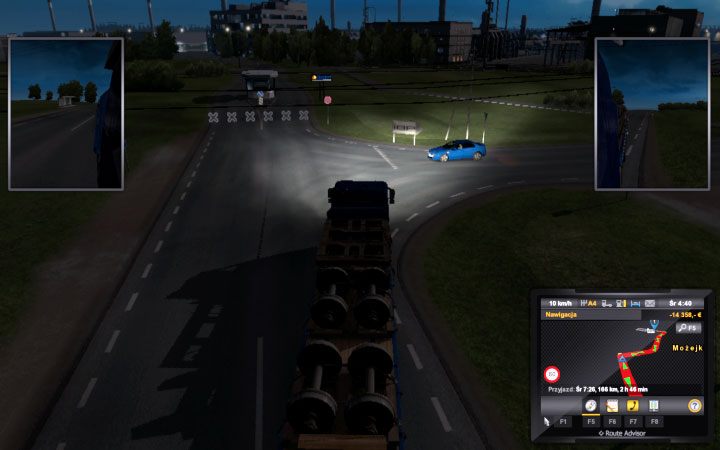 The city isn't large. It is focused on a single company (a refinery) that is located at the end of the road that leads north. Access there is troublesome - the city is on the side, far from any key roads. 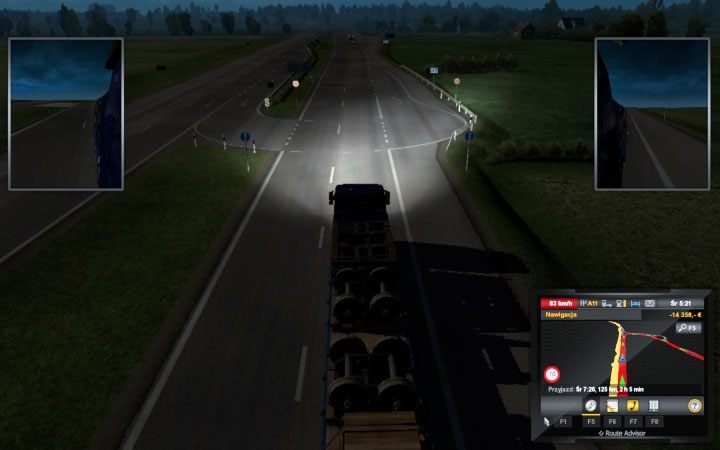 There is a gas station on the way there. On the road to the city, while it still consists of two lanes, you will encounter spots where you can turn around. 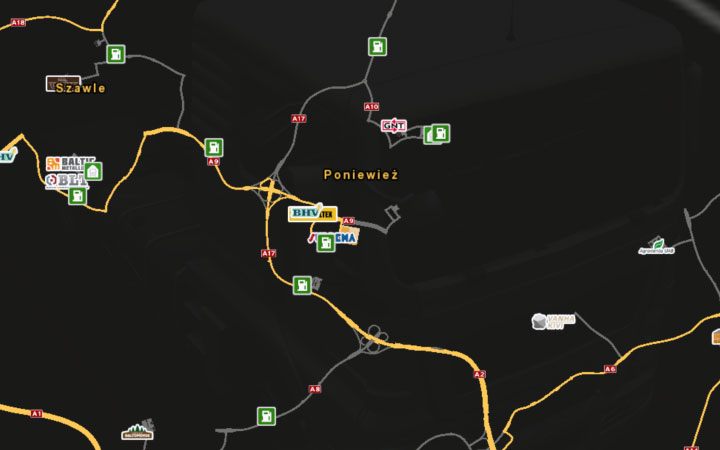 A map of Panevezys.

The city is located in the central port of Lithuania, on the route from Vilnius towards Riga. It is in the east of the road that is partially a high-speed road. It is split into two areas - one is at the road junction at the other is slightly further to the north from the main NS road. 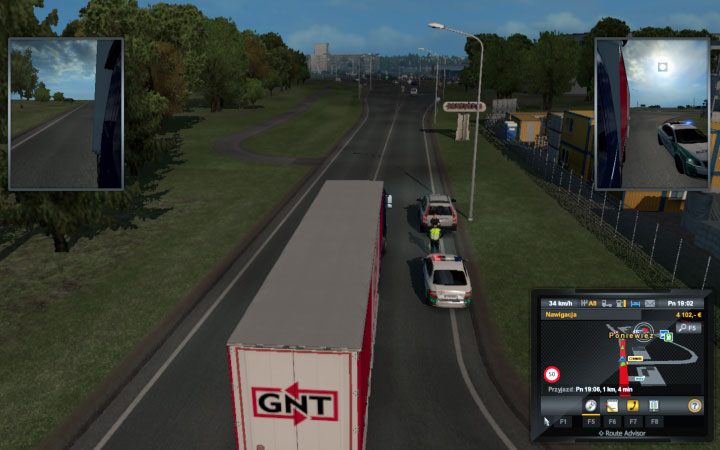 The city is small. In its southern part you will find a gas station and three companies. In the northern part there is also one company, garage, workshop, gas station. 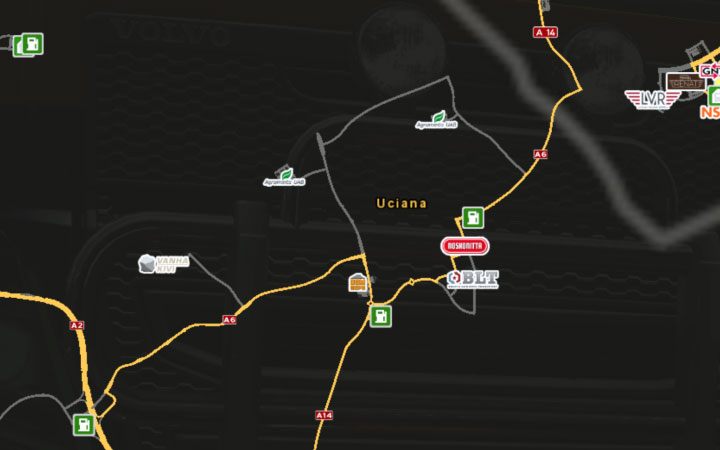 A map of Utena.

A small city located in the eastern Lithuania. It is located at the road that leads from Vilnius towards Latvia, to Daugavpils and further north. West from it there is the Slauliai city. 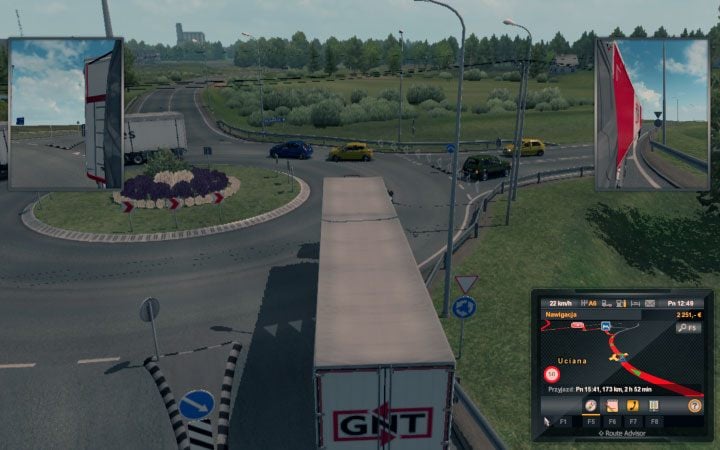 The city is located at a narrow road. Although it is small, some objects assigned to it are located quite far away. It is tight, not comfortable and it features two roundabouts. In the city center there are two gas stations and two parking lots. For such a small city, there are many companies here. 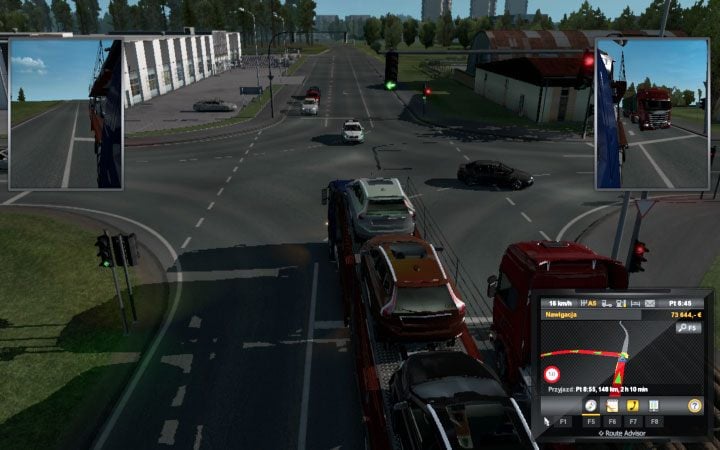 There are three transport companies in the city, two more to the north, and one in the west. Together this gives a large number of six companies located near the city. Be wary of signals in the city - they have phases. 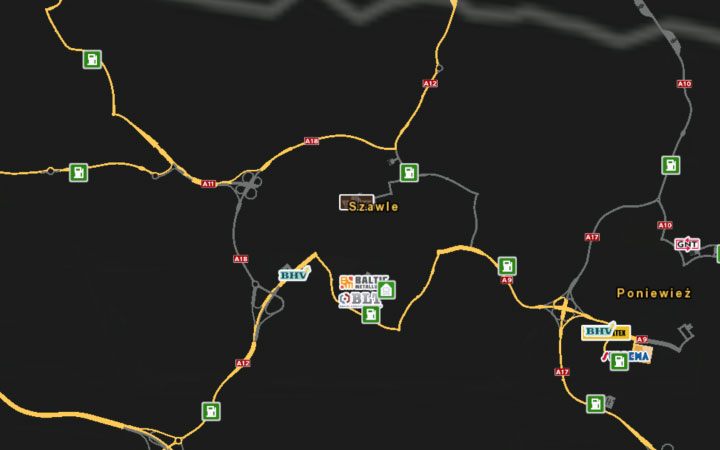 It's a small but vast city in the central part of Lithuania. From here it is close to Panevezys. A ring road is around the city. 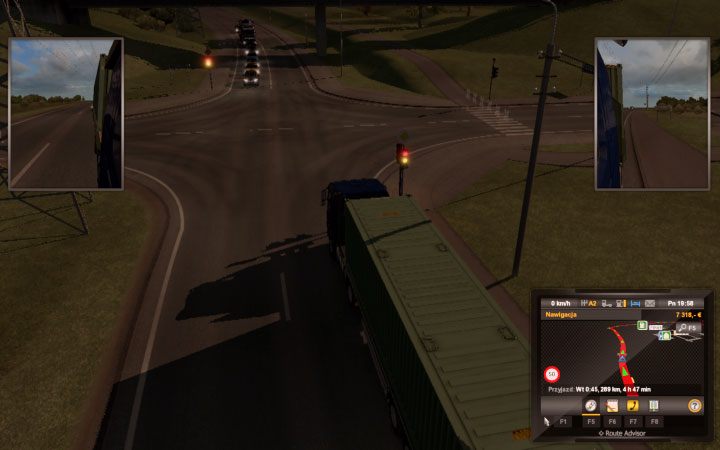 The road to the center is narrow and it features signals, roundabouts etc. - they slow you down before you reach the objective. Riding through the city takes time. In the center you will find three companies, garage, gas station, and two parking lots. Far to the north there are workshop, gas station, and another company. Driving through the city takes some time, so if you want to move from the place with company to the workshop, it won't be fast. 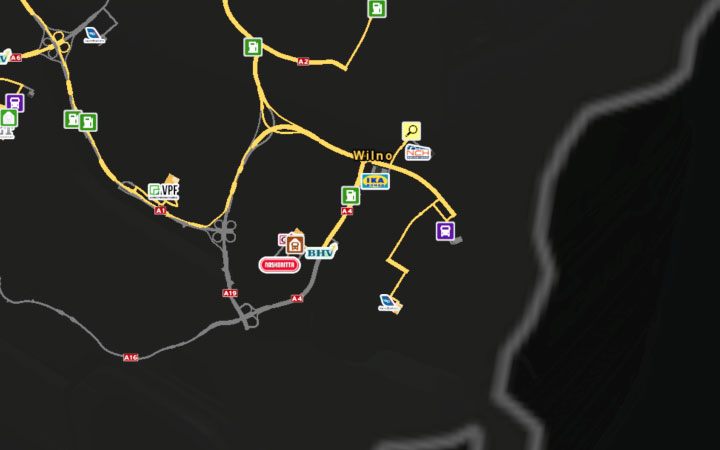 A map of Vilnius. 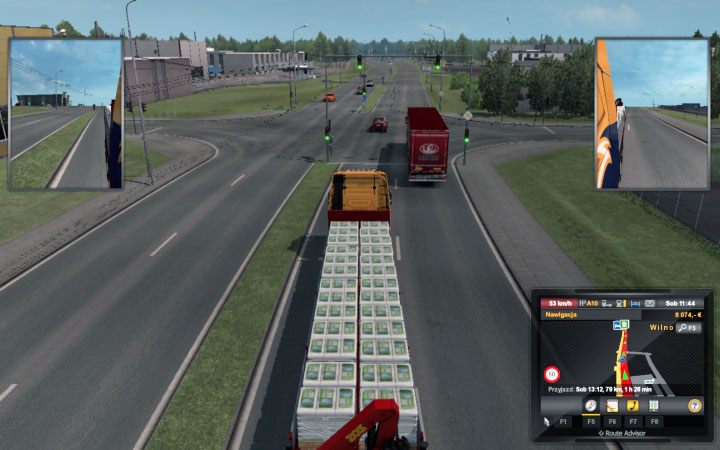 There are highways around the city. In the city itself the streets are wide and they feature two lanes. Objects are scattered across the area. Here you will find a garage and three companies in the central part. In the north there is a job agency and two more companies, in the east there are a workshop, parking, Volvo truck dealer and one company. Beyond the city, far to the west, behind the ring road, there is the last company.