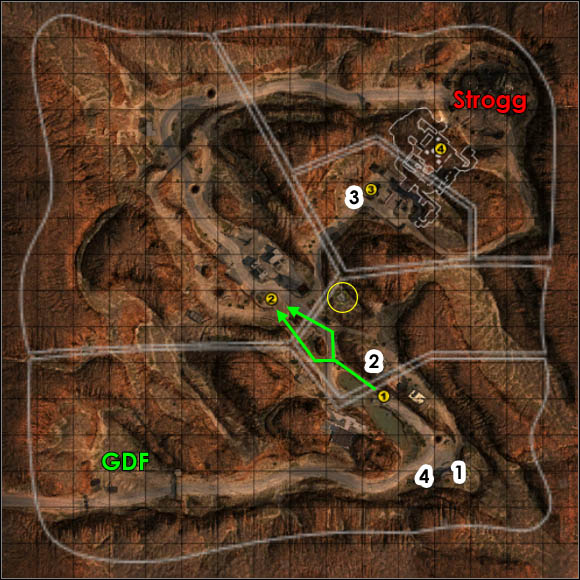 1. GDF engineer must build a bridge on the way to the central outpost;

2. Escort the MCP to the central outpost;

4. The last target is the stroggifier placed inside the bunker. GDF soldiers have to destroy it with their explosives.

GDF: This is a long and difficult operation. First of all, find some wheels and get to the south-eastern part of the map and capture the spawn point located in there (secondary objective 1). Forget about constructing the guard tower, unless you're an engineer looking for XP. Next thing the team should do is constructing the bridge. Unfortunately, this action has two parts and takes a lot of time. That is why engineers must be supported by soldiers and medics. The enemy will attack with tanks and infantry, so GDF must get some heavy machinery (like Titan) on the battlefield too.

Next objective is escorting the MCP to the central outpost. In order to do it fast, the team must divide into three groups. The largest, consisted of soldiers with rocket launchers, must find some place on tops of the hills surrounding the outpost and attack every single enemy vehicle and turret. The second one, consisting of engineers, have to drive the MCP and constantly repair it. The last group must support the two others. I think it is easy to figure these guys must choose the medical class. It also would be nice to capture the spawn point nearby (secondary objective 2). No matter which route the MCP will choose, it will face have Strogg defence.

The third target is the shield generator. Frontal attack is incredibly difficult and brings a lot of casualties, but it is necessary to attract the enemy's attention. Thanks to that, disguised spies can easier get to the generator. There's a nice way to the target, it is located to the northwest of the Strogg facility. Against your enemy, use your artillery and as much heavy machinery as you can get. The infantry performing a frontal attack should choose functions like soldier (with a rocket launcher), field ops and - traditionally - medic. Spy's disguise could be quite useful, as the way through the mountains to the target is quite long and there is a probability of spotting some enemy snipers in that area. Stabbing them should make regular infantry's job at least a bit easier. Moreover, don't forget that the enemy could put some mines on the generator.

The last task here is to blow up the stroggifier placed inside the bunker. It is a typical objective for soldiers armed with assault rifles. They should be supported by medics and the best spawn point for that part of the mission is located in front of the bunker (secondary objective 3). The last task won't be as easy as it may seem. The most important things here are accuracy and rapid movement. But try to be careful - during entering the room with stroggifier, it is a necessity to check if there's someone in corners of the room or behind walls placed around the target. Moreover, expect some mines on these walls.

Strogg: We have to work fast. Tops of the hills are perfect vantage points for infiltrators with railguns; they can eliminate engineers attempting to build the bridge. Apart from snipers, the team must have some aggressors and technicians. The spawn point in the ruined building (marked with a yellow circle on the map above) can be quite useful, especially for those who want to attack enemy engineers through the tunnel. I advise you to check the picture below. It shows how Strogg can use the tunnel to defend the bridge construction site. 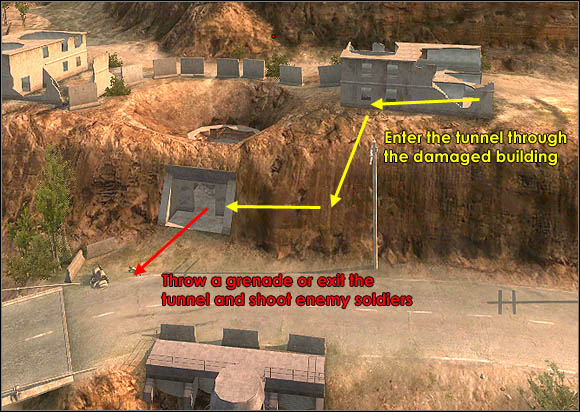 However, you must expect enemy soldiers at the damaged building presented above. Desecrator on the northern side of the bridge should intercept enemy tank, so the driver won't concentrate on protecting GDF engineers. Oppressors with their artillery should take a part in the battle when the enemy brings some heavy vehicles to the fight or when the will be nobody to protect the bridge construction site.

If the GDF will manage to build the bridge, prepare yourself for a struggle with MCP. Because MCP's crossroad is located near the place it is going to, anti-vehicle turrets deployed in the vicinity of that place will be able to guard both ways. The team must be now composed of constructors and technicians - to replenish Stroyent, repair turrets and to liquidate enemy engineers. Oppressor can use his artillery to disable incoming GDF armoured vehicles.

Now the team must defend the shield generator. First of all, put some mines on that target. Besides, I advise you to deploy at least two turrets - one anti-vehicle and one anti-personnel. Constructors are essential here, as they can repair their deployables. If the enemy will become weak, try to get closer to his spawn point and install a few mines on the road connecting your base with the enemy. Moreover, the team could use some technicians and infiltrators with railguns - jus as before, this time the can also get on tops of the hills and aim at enemy infantry. And watch your teammates' behaviour - you never know which one is a GDF spy in disguise!

In the end, the Strogg must defend the stroggifier itself. Beside mines (which should be deployed everywhere in the complex), remember that defenders can hide in corners of the room with the device the GDF wants to blow up. Defence should be established by technicians and constructors. Aggressors with their hyperblasters can wait for enemies in long and narrows corridors, but I don't think they'll last there for long. Of the players may try to get the Cyclops and stand in the space between the building with stroggifier and the GDF spawn point. This should stop enemy troops for a while.