Welcome in game guide for Enemy Territory: Quake Wars. This article includes descriptions of 12 maps prepared by Splash Damage, presentations of all weapons, vehicles and deployables. This game guide is written mainly for new players, who are not acquainted with this type of games and especially with productions named ET. This article will help them understand game rules before they start fighting in multiplayer mode.

For experienced players, the guide won't be as helpful as for the beginners, but a few facts, hints and clever tricks will probably be interesting even for those, who already spent with the game a lot of hours. The most important and difficult to understand issues are presented not only in a form of text, but also shown in screenshots.

I wish you good, useful reading and many successes during fights against GDF and the Strogg! 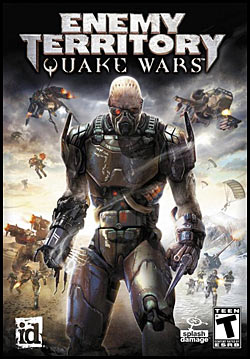 Serving as the prequel to id Softwares legendary QUAKE II, Enemy Territory: QUAKE Wars is the ultimate online team and objective-based multiplayer experience. Set within the epic QUAKE universe in the year 2065, the game pits the Allied troops of the Global Defense Force (GDF) against a new Axis of Evil  the barbaric and technologically advanced Strogg - during their initial invasion of Earth.

Gamers choose to play as Human or Strogg in one of five unique character classes. Employing an arsenal of weapons, vehicles and deployable armaments, players engage in an action-packed test of skill and coordinated teamwork through a series of combat objectives. Persistent character growth and achievements reward players for teamwork, while clearly defined mission and class objectives guide new players to meaningful contributions on the battlefield.

Team-Based, Strategic Missions  Gameplay in Enemy Territory: QUAKE Wars is all about conquering and securing enemy territory, and pushing forward or holding your teams front line. Players must work together using their vehicles, deployables, and character class abilities to complete objectives, defend valuable installations, or execute massive assaults. The gameplay is designed to allow players of every skill level to jump into a match and make a sizeable contribution to the overall mission. Every players choice of character class, along with their actions play a critical role throughout as they gain rank, upgrade skills and provide specialist abilities necessary for victory.

- Unique Teams and Character Classes  With asymmetric gameplay, the characters of both the GDF and the Strogg look, move, and behave uniquely. Bases, characters, vehicles and weapons demonstrate the different technologies and behavior of each side and require distinctive approaches to combat from each player. For example, a GDF Medic can heal and quickly revive injured or fallen soldiers on the field, while the Strogg Technician may use a GDF corpse as a host body for a waiting Strogg reinforcement. Similarly, the GDF Field Ops will deploy and call-in a laser-guided strategic strike missile, while the Strogg Opressor peppers a GDF convoy with his Plasma Mortar. Players can choose one of five character classes unique to each force, including the GDFs Soldier, Field Ops, Engineer, Covert Ops and Medic, or the Stroggs Aggressor, Opressor, Constructor, Infiltrator, and Technician.

- Weapons, Vehicles, Deployables  The weapons, vehicles and deployables in Enemy Territory: QUAKE Wars are much more than standard issue equipment. Each selection truly affects gameplay and is integral to a teams success or failure. Set in the relative near future, the Human arsenal is based on ultramodern updates to todays conventional Earth arsenal, while the Strogg utilize a more advanced technology suitable for conquering vastly different alien worlds. The GDF use weapons, and vehicles such as machine guns, rocket launchers, armored personnel carriers, and hover-copters, among others. Conversely, the Stroggs technology is built on the manipulation of energy and gravity and includes assets like the Hyper Blaster, Lightening Gun, a giant mech-walker, a hover tank, vertical take-off and landing Hornet, and more. Players will also utilize unique strategic assets like radar, auto targeting anti-personnel or vehicle turrets, artillery or strategic strike missiles  all of which are realistically deployed onto the battlefield when and where you choose.