On this page of our guide to TESO you will find information about the main similarities between TES V Skyrim and The Elder Scrolls Online. You may find this knowledge useful if you've played single-layer versions of The Elder Scrolls so far and are interested in buying TESO. 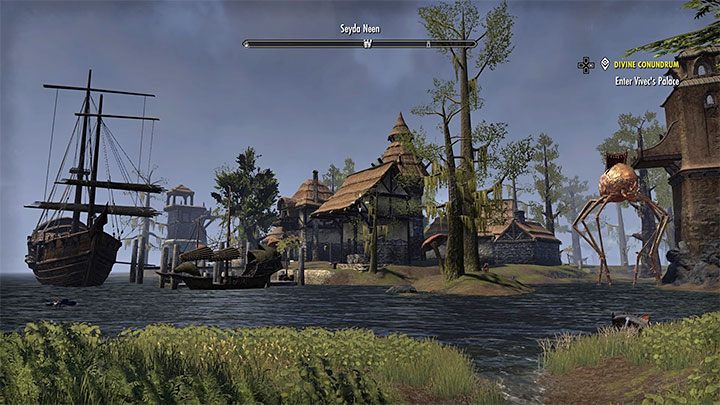 One of the main similarities between TES V Skyrim and TESO is that both games place great emphasis on exploring the world and completing quests. If this type of activities has given you a lot of pleasure in Skyrim, then you will enjoy Elder Scrolls Online.

The game world in TESO is gigantic. Also, the game doesn't have any limits or constraints associated with required level of experience. There is the so-called level scaling in The Elder Scrolls Online, which (in a great simplification) scales the level of enemies, quests and events of the games world in accordance to your current character's level. The result of this action is that the requirements to complete quests or defeat encountered enemies never exceed the current capabilities of the main character. This allows you to travel to the realms that interest you the most after the prologue (tutorial) has finished.

Quests in TESO do not resemble "generated" grind-like quests, which is a common disadvantage of many MMO games. The missions received are varied and often also require, for example, solving a puzzle or conducting an investigation. Additionally, The Elder Scrolls Online features main story missions and large story missions in each of the major regions that can be visited. 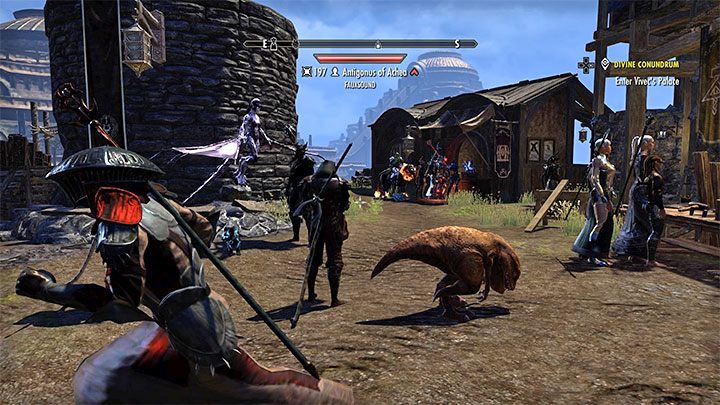 In TESO, you'll run into players who also visit the same locations. However, interactions with other players are not mandatory - if you want to play solo instead of traversing the game world in a party, then it is possible to do so individually. The presence of other players won't spoil your gameplay - you don't have to worry about losing the opportunity to get a valuable loot or complete your current quest.

In The Elder Scrolls Online, PvP works by challenging other players to duels while exploring the game's world. You don't have to worry about another player suddenly attacking you and depriving you of all your equipment without being able to defend yourself. You have to agree to a duel and you can also disable it completely in the options (other players PvP requests will be automatically rejected). 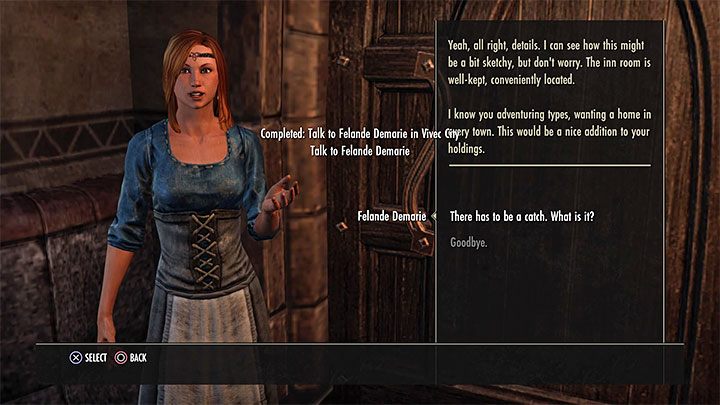 There are plenty of NPCs in the TESO game world, and lots of them have a unique meaning and own story. It is possible to interact with NPCs and is often required in order to, for example, get promoted in quests or order a service.

After you talk to the NPC, a list of dialog options is always displayed. Special dialog options may also be available, for example, after unlocking the ability to intimidate other characters. It is worth adding that all NPCs dialogues have been voice-recorded. You don't have to force yourself to read the text, you can just listen to what they say. 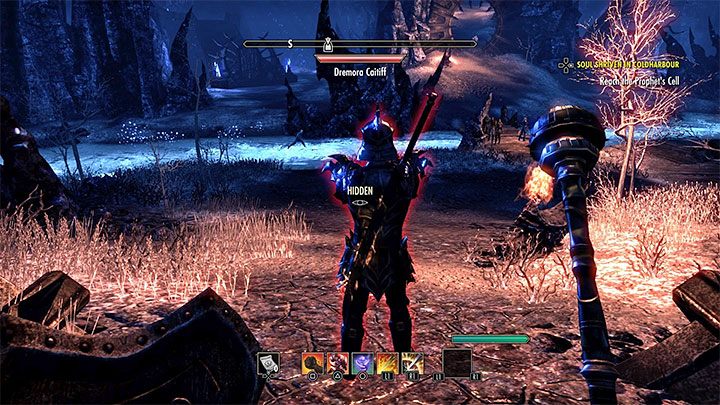 Many of the main mechanics in TESO are more or less similar to those available in Skyrim. You don't have to learn everything from a scratch and the transition from playing a solo game into playing MMO is not that problematic.

Combat works similarly, although TESO places more emphasis on the use of active skills available on the quick selection bar. They can be offensive or defensive in nature, and in many cases have a positive effect on other nearby players who travel with you. In TESO you can choose your preferred style of gameplay and play as a Warrior, Archer, Assassin, Mage or a character combining different styles of gameplay.

Character development is resembling the system used in Skyrim in the aspect of how skills are being developed further. As the game is played in a certain way, by performing particular activities you can increase specific skills (like fighting enemies with two-handed weapons, wearing light armor). In The Elder Scrolls Online you also gain experience points that speed up your promotion to higher levels. After advancing to each new level in addition to skill points, you can receive various valuable prizes, such as a stock of raw materials or a new item of armor piece.

Sneaking is similar to the game mechanics used in original Skyrim. When you crouch, an identical indicator is displayed on the screen, informing (in real time) whether your character is hidden. Staying hidden allows you to pickpocket NPCs or rob their houses, as well as launch surprise attacks. In TESO, a lockpicking mini game is different, however the protagonist continues to use lockpicks which are durable and can break.

Trouble with the law 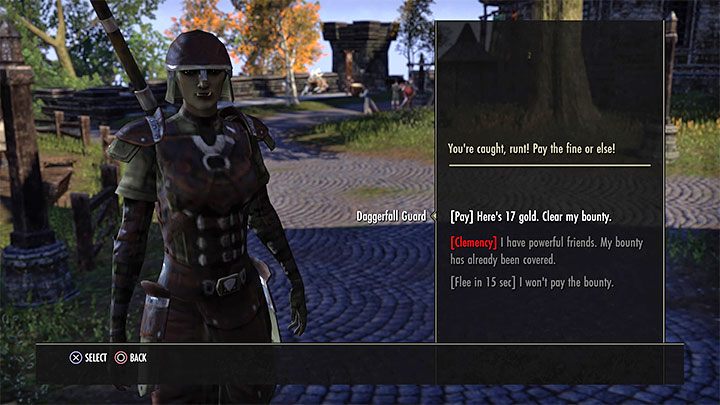 In TESO, as in Skyrim, you can get into conflict with the law for breaking existing laws. This can happen, for example, as a result of being caught while stealing items, after entering a prohibited zone, or after attacking an innocent independent character.

Depending on the type of crime committed, guards may try to capture your hero or attack you immediately after noticing the crime. If you got detained, you can pay a fine or escape. Items from the theft will also be taken away from you (you sell them at black market (fence) beforehand). In The Elder Scrolls Online, there is no option to serve time in prison known from Skyrim. 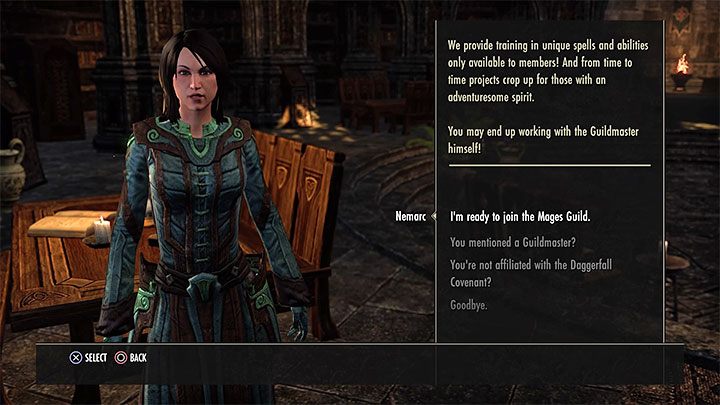 The Elder Scrolls Online features the main guilds known from Skyrim, namely the Fighters Guild, Mages Guild, Thieves Guild or Dark Brotherhood. You can make an effort to join them. This will allow you to take orders from the members of the guild and, among others, buy unique equipment at the guild's premises.

Access to the Thieves Guild and The Dark Brotherhood is initially blocked. In order to unlock the possibility to join these factions, you need to acquire related add-ons - you can purchase them for crowns (each DLC costs 2,000 Crowns) or pay for an ESO Plus subscription.

As TESO is an MMO game there are also player guilds available. You can apply to join one of the existing guilds or create your own. Joining the players guild is of course fully optional, but there are numerous bonuses involved - for example, you will be able to organize expeditions or use the services of merchants working for a particular guild. 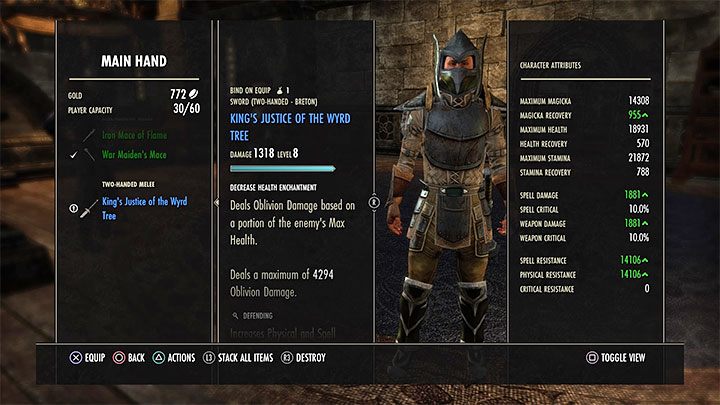 In The Elder Scrolls Online it is a lot easier to fill and overload the inventory than in Skyrim - by default it has 60 slots and even though you group identical items you can reach the limit quite quickly. As a result, you need to pay more attention to freeing up space in your inventory, for example, before heading to a dungeon with a potentially large number of treasures to find.

Fortunately, the game offers a variety of options in the subject of inventory management - you can sell, dismantle or destroy unnecessary items. There is also a bank in TESO where gold and items can be deposited. Items stored in the bank are available for all your characters. If you have an ESO Plus subscription, you will also receive a Craft Bag, which allows you to store an infinite amount of crafting materials. 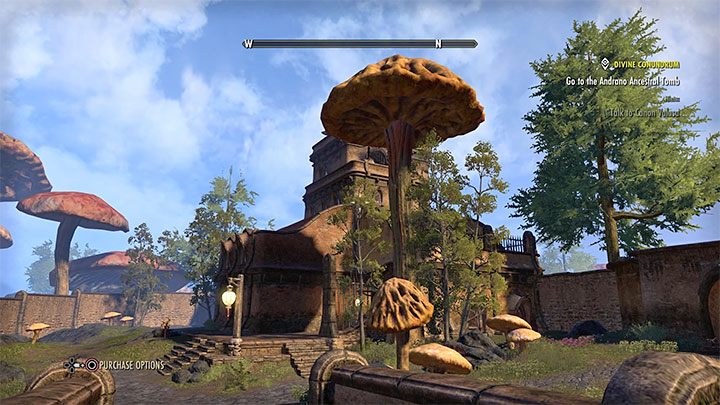 Some of TESO's game progress and events are much slower than in Skyrim. This is particularly associated with the topic of making money (Septims). In The Elder Scrolls Online, you can't become rich in an easy way. Completing quests doesn't guarantee huge cash rewards and you can't sell loot to dealers in order to earn a big profit. As a result, you have to save a lot of money and try to avoid unnecessary large expenses.

In The Elder Scrolls Online, for example, obtaining a house is a much time-consuming process. Buying your own home is a big expense. In addition, in the case of houses, they are "empty" by default, so you have to take extra care to buy or produce all the furniture.

Fortunately, not all progress is that slow. A controlled character can advance to the higher levels quite quickly and receive associated perks. You don't have to worry that reaching level 1 will take you even a few hours of game time. Level ups come easily, especially if you are interested in completing quests that allow you to earn large amounts of xp.