On this page of our Elden Ring guide, you can find out more about Millicent's questline, which takes place in Caelid, in Church of the Plague to be exact. The quests also involve another NPC, Gowry, who can be found in his shack. Thanks to our guide, you can learn the exact locations of Millicent and Gowry, view the walkthrough for the questline, and learn what rewards can be obtained for completing it. 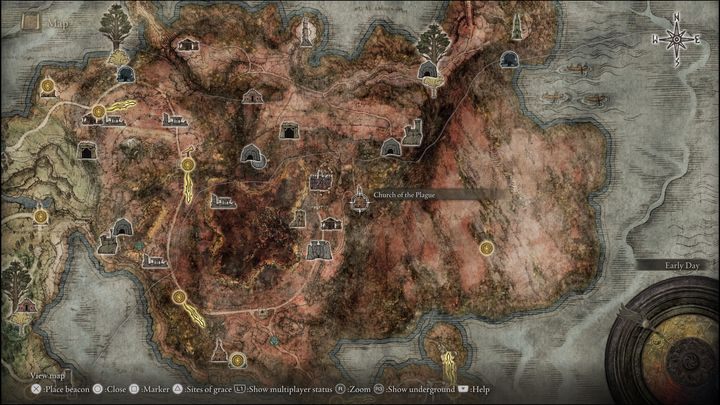 Church of the Plague is in the center of Caelid. This is where Millicent can be found. 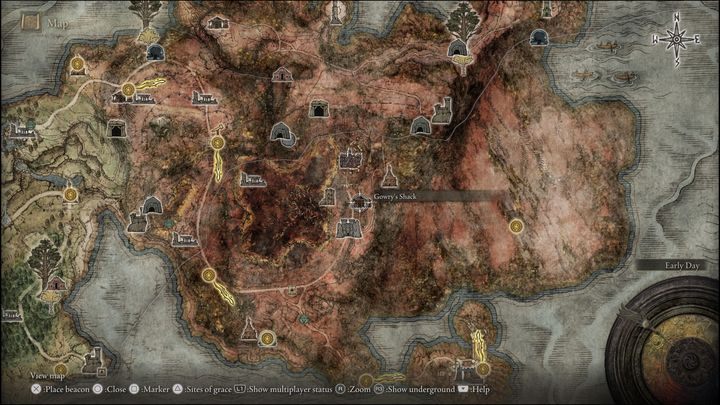 Gowry is found nearby Church of the Plague, in Gowry's Shack .

To begin the questline,, start by visiting Gowry's Shack. 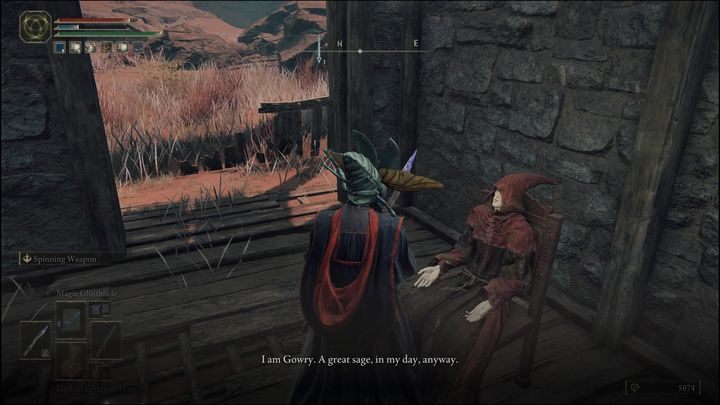 You can find him sitting on a chair inside the building. There is a large dog-headed opponent in the vicinity, it is better to get rid of him first, before talking to Gowry. 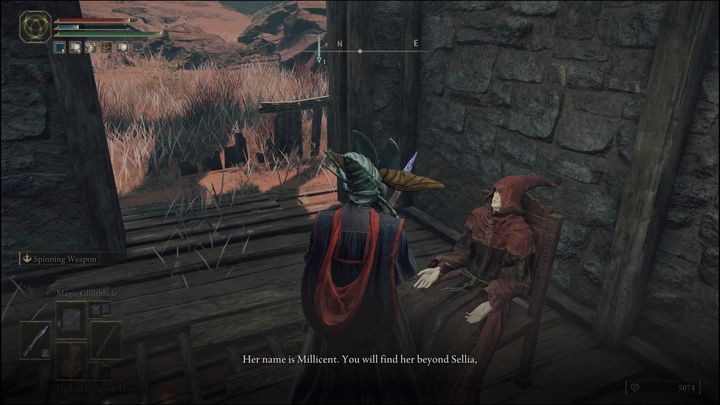 The man will give you a task to find Millicent. You can find her in Church of the Plague, but before you can enter this location, you must first remove the seals in Sellia Town However, before you embark to complete this objective, you must first retrieve Unalloyed Gold Needle. 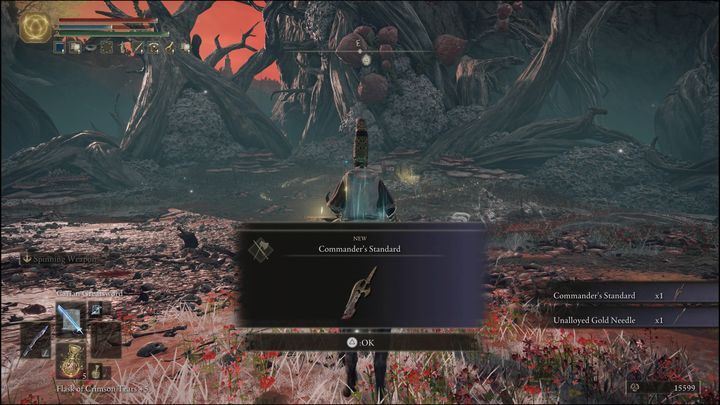 This is a reward for defeating Commander O'Neil. You can find him in Swamp of Aeonia . The fastest way to that region leads eastwards of Gowry's Shack, or you can travel north from Southern Aeonia Swamp Bank. You will notice that you are getting close to the boss thanks to a large number of roots and tree trunks. 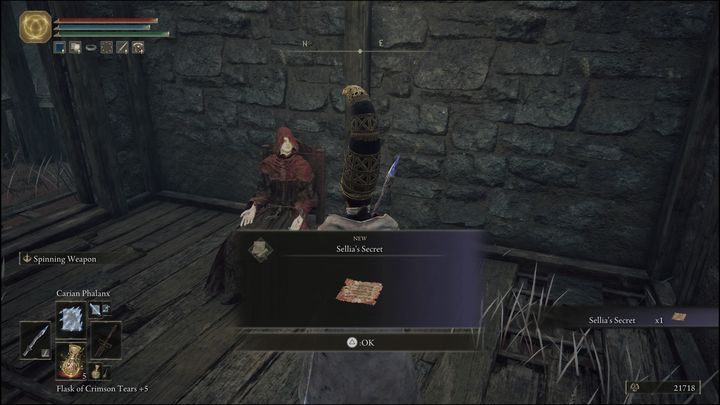 After defeating the boss, go back to Gowry. He will give you a reward - Sellia's Secret. During the conversation, he will inform you that he needs some time to repair the needle. 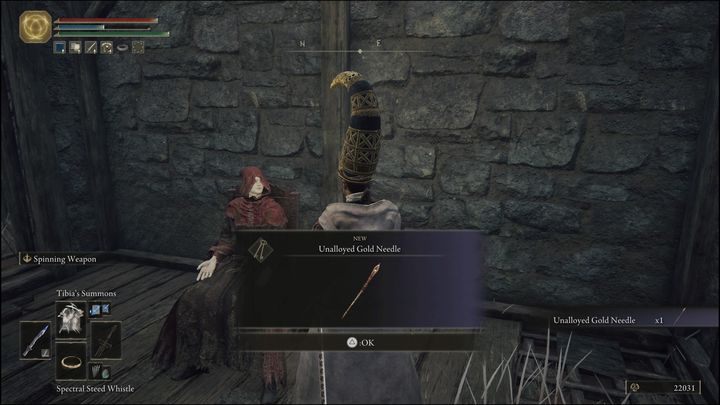 Either restart the game or rest at a site of grace and go back to Gowry. Talk to him to receive the fixed needle. Now you can go to MIllicent. 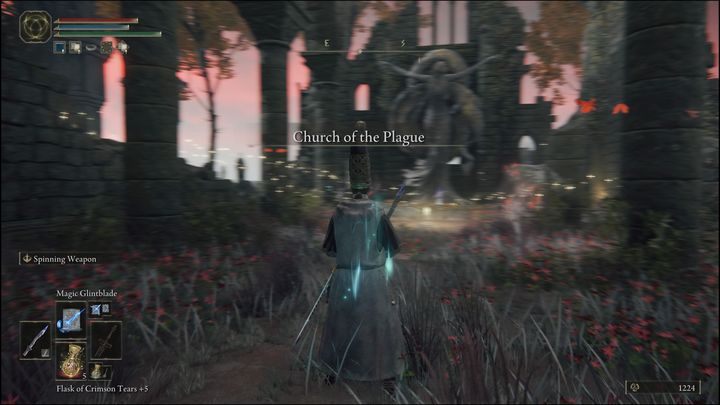 You'll find her in Church of the Plague - she will be leaning against the wall. 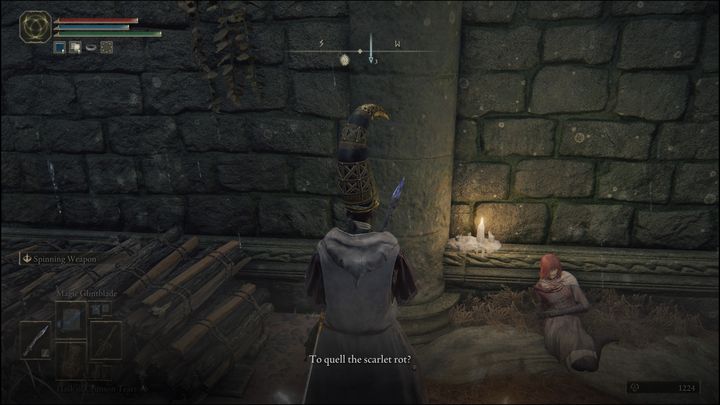 After a short conversation, give her the needle. To proceed to the next part of the quest, rest at a site of grace or restart the game. 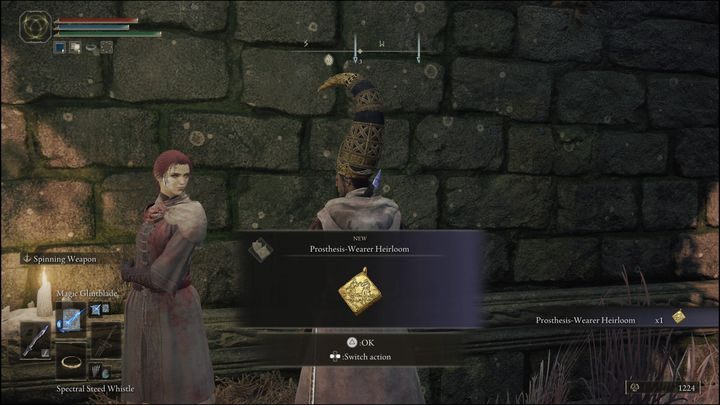 After the new conversation, the quest continues, while you'll receive Prosthesis-Wearer Heirloom talisman. Next meeting with Millicent will take place in Gowry's Shack. 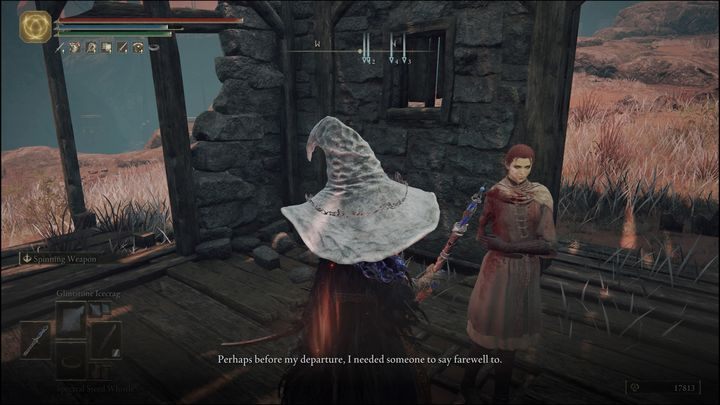 Talk to her again to continue the quest. Milicent will switch her location again. 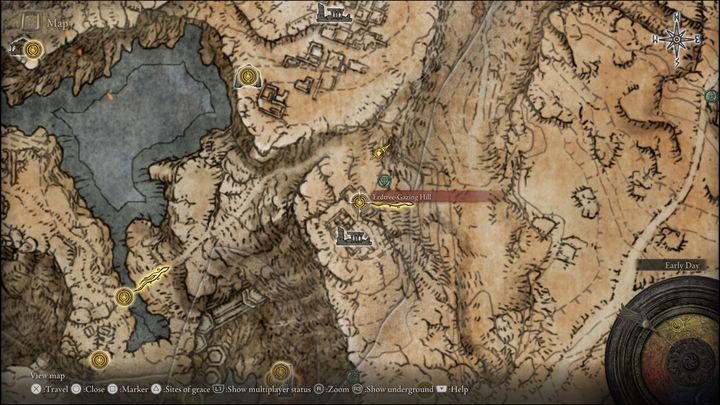 You can now find her in Altus Plateau, northwards from Erdtree-Gazing Hill site of grace. You can find her near the edge (this is indicated by a yellow marker). 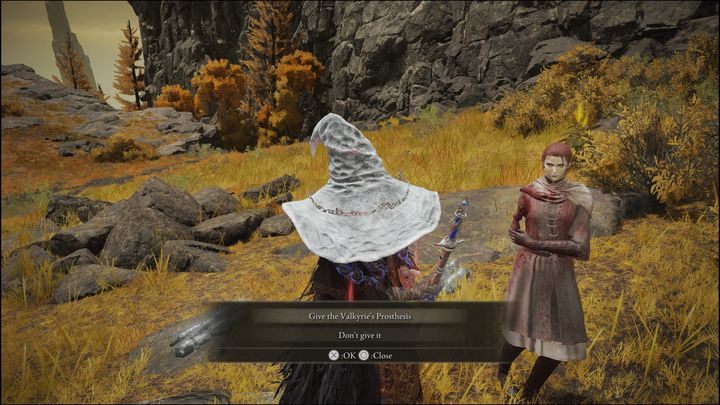 To continue the quest, you need to retrieve Valkyrie's Prosthesis . It is in Shaded Castle . 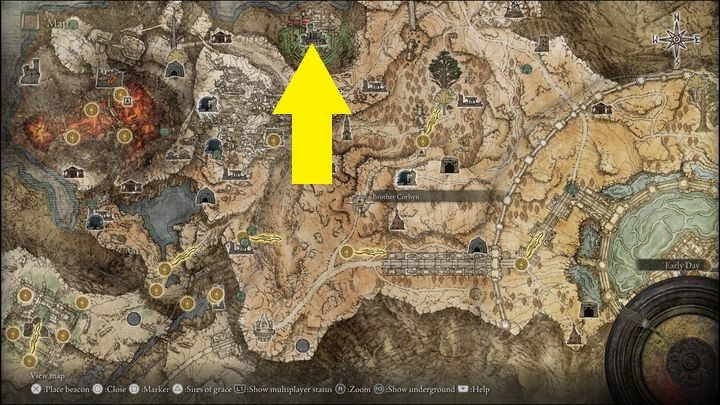 Head north through the canyon in the Altus lowlands. When you reach the castle, you have to defeat the Cleanrot Knight , who guards the room with the prosthesis. 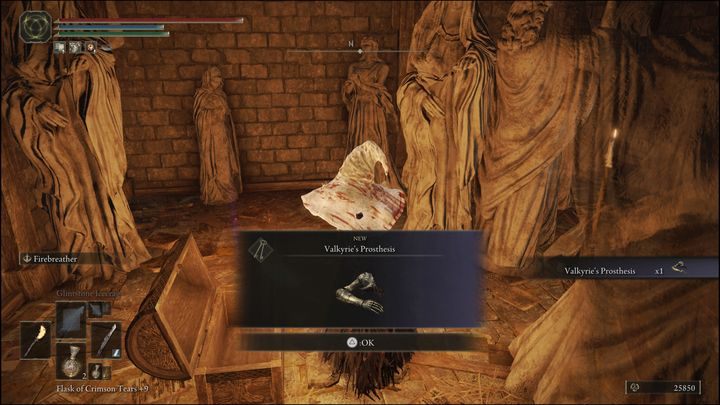 To get to the enemy, you need to get to the interior of the castle and climb a long ladder that leads to the castle walls. Once there, you'll encounter a few standard opponents and the aforementioned knight. 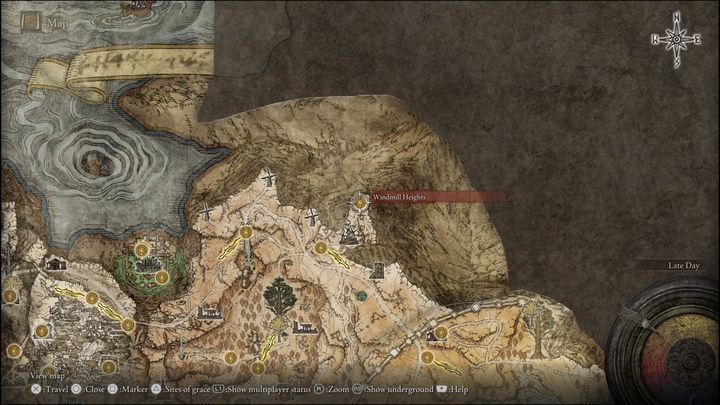 After the battle is victorious, return to Millicent (Altus Plateau) and give her the prosthesis. Millicent's next stop is Windmill Village. There is a Godskin Apostle in the vicinity. Defeat it and rest at a site of grace. After resting, you should see Millicent. 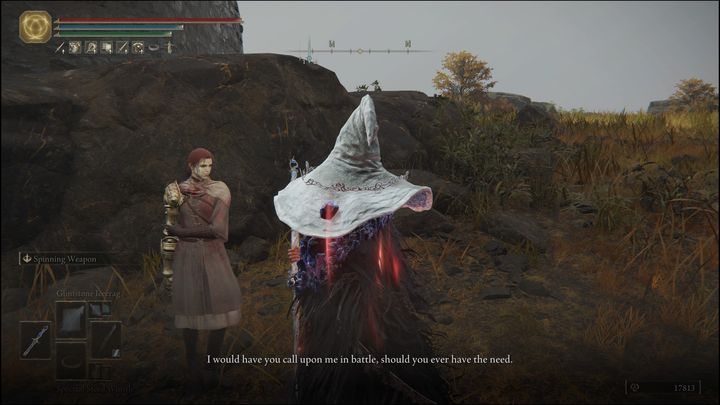 After a short conversation, Millicent will move to a different area again. This time you need to travel to Mountaintops of the Giants. 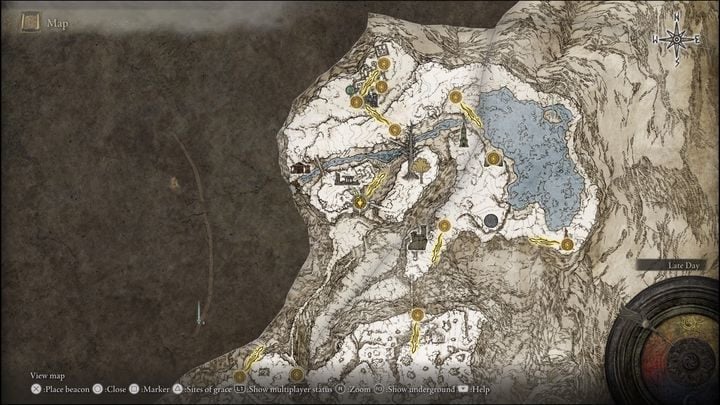 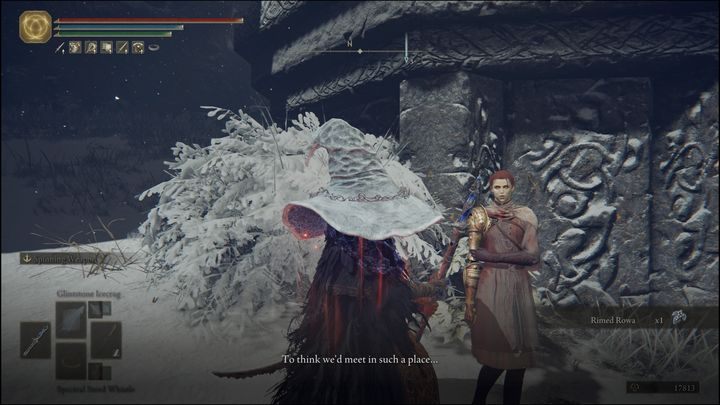 Exhaust all dialogue option during the conversation. Your next destination is Miquella's Haligtree. 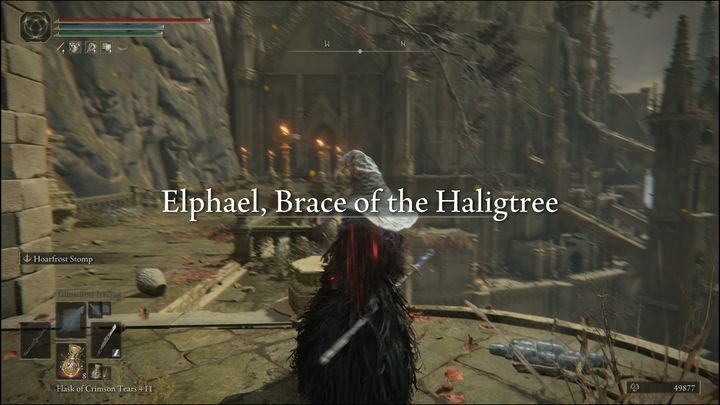 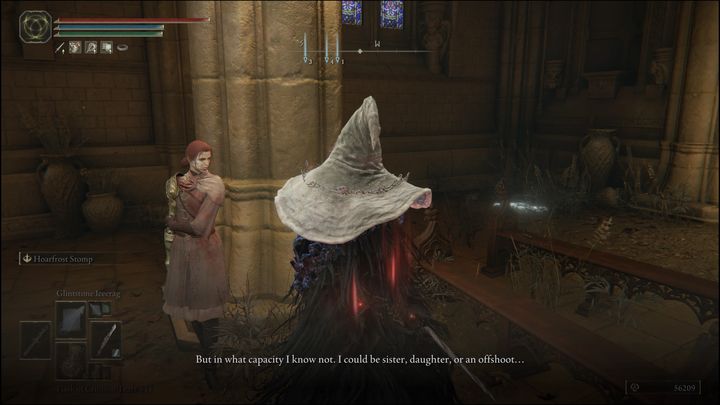 Follow the path to reach a site of grace called Prayer Room. This is where you will meet Millicent once again. Exhaust all dialogue options during the conversation. 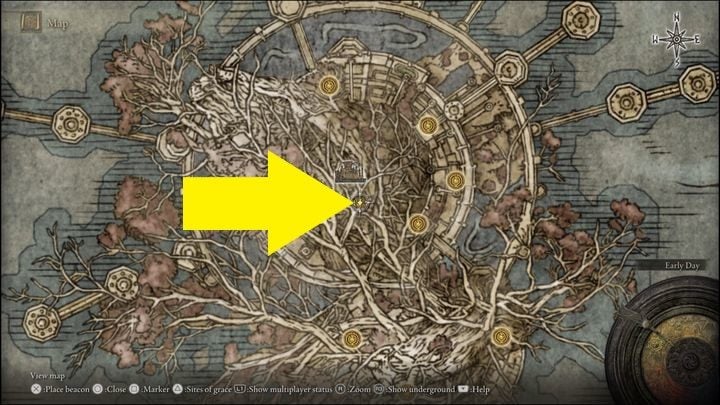 The final destination is Elphael . To get there, continue forward while moving towards Malenia, Blade of Miquella. 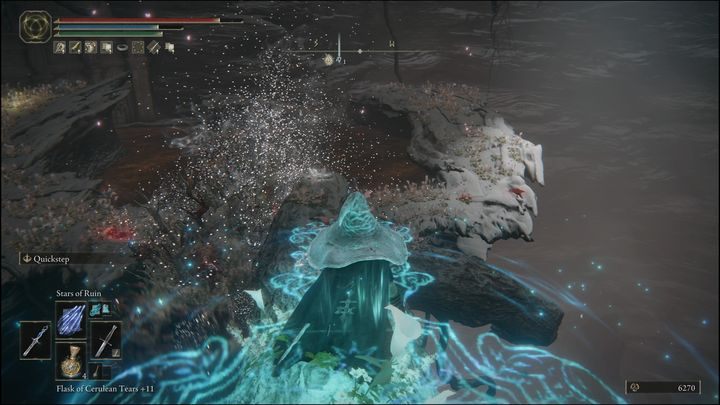 The arrow on your map will lead you to an arena where you need to face the tree spirit. If you're playing a mage, you can easily dispose of it by going downstairs and then going upstairs through the tree root and throw magic projectiles during this move. 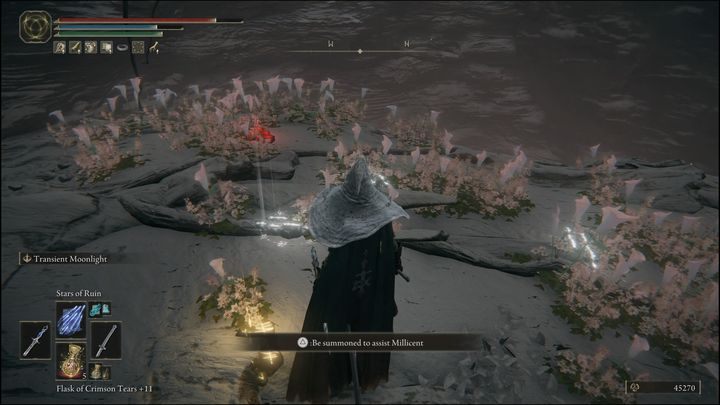 Once the boss is defeat, go down. On the right side, you will notice two signs, one yellow and one red.

If you take the yellow one, you'll help Millicent defeat four sisters that are out to get her. The red one means you need to face Millicent in battle. 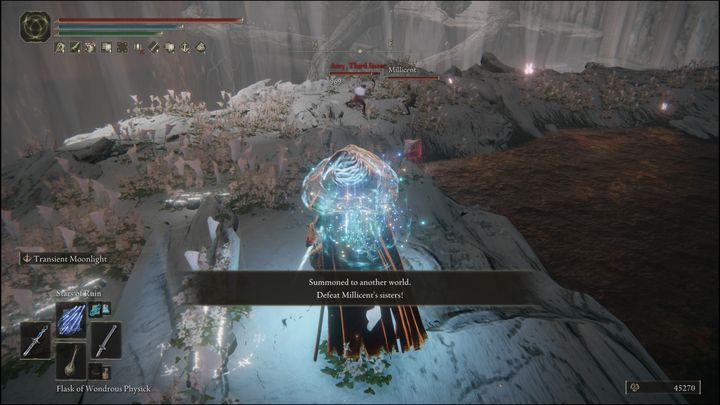 This choice has some consequences. Both options are rewarded with a talisman, but its powers will differ depending on the decision you've made. Nevertheless, choosing the yellow sign is rewarded with a needle that can help you avoid one of the endings. Killing Millicent means that you won't receive the needle, so the decision is up to you. 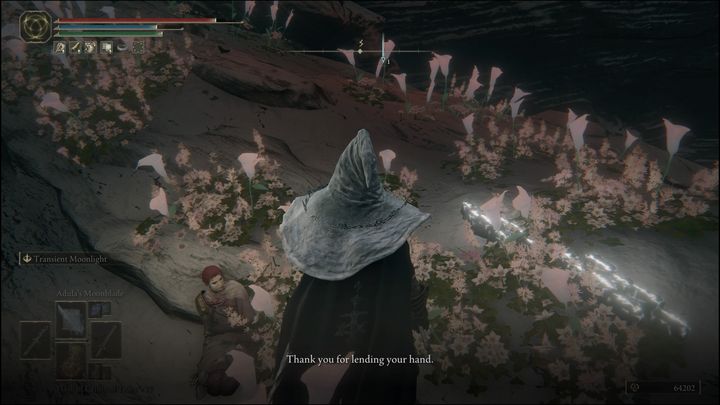 If you chose helping Millicent, you'll be able to access a lower level, close to the swamp. Once you're there, the woman will thank for your help and give Needle back to you. Quest complete.

If you decided to kill Millicent, you'll be rewarded with Millicent's Prosthesis talisman.

Rewards for completing the quest - Millicent 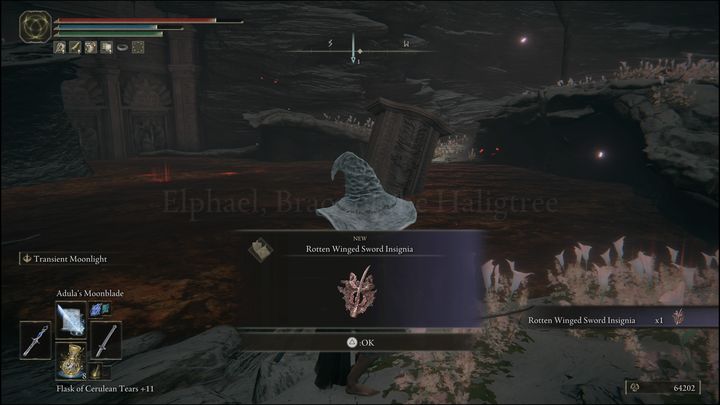 If you've decided to help Millicent in the battle against the sisters, you'll be rewarded with Rotten WInged Sword Insignia talisman. The talisman increases damage dealt with each successive strike. 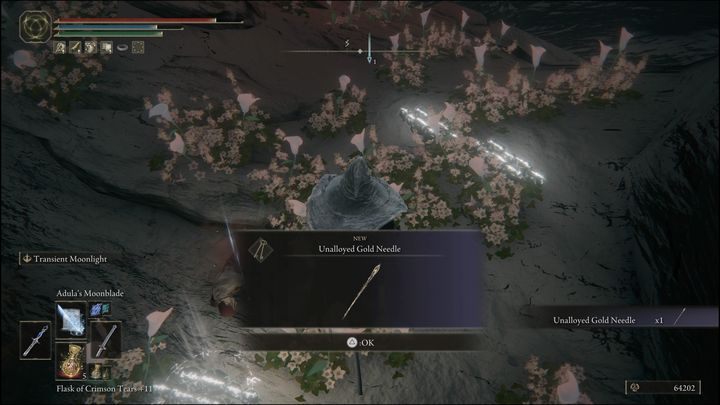 More importantly, defeating the sisters yields Unalloyed Gold Needle, which is needed in order to protect you from one of the endings of the game. 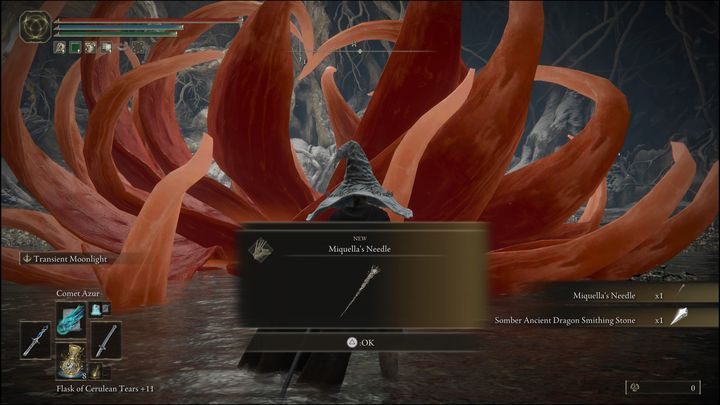 After defeating Millicent, get in the center of the arena and approach the big flower. Interact with it to receive Miquella's Needle and Somber Ancient Dragon Smithing Stone. 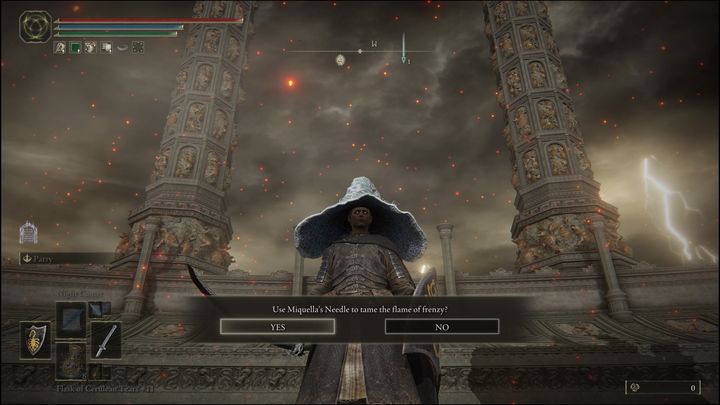 Killing Millicent leaves you without the needle, but you'll receive another valuable item - Millicent's Prosthesis talisman. This talisman increases dexterity by 5 points and increases attack power with each consecutive hit. Remember that only struck hits count towards the bonus.

Reward for completing the quest - Gowry

After you complete all the Millicent quests, Gowry will also reward you with a few gifts. You can now buy several sorceries and incantations from him.

As you return after completing the questline, you'll receive Flock's Canvas Talisman and Gowry's Bell Bearing.