This page of our Elden Ring guide is dedicated to an optional boss encounter taking place in Liurnia of the Lakes region. Your target is called Alecto, the Black Knife Ringleader. Defeating him yields, among others, legendary ashes .

To get access to this boss, you need to travel to Ringleader's Evergaol. The closest site of grace to the location is called Moonlight Altar. (site of grace #52 on our map) Unfortunately, accessing it is only possible after defeating Astel . The region is of importance, as there are questlines to undertake here. 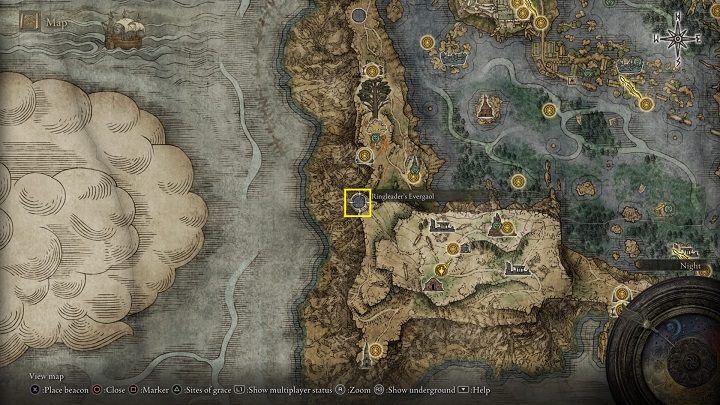 Ringleader's Gaol is located to the northwest of the aforementioned site of grace (view the attached screenshot) Along the way, watch out for 2 dragons that may attack you both at the same time.

Alecto, Black Knife Ringleader is an optional boss that you do not need to defeat to complete the game. 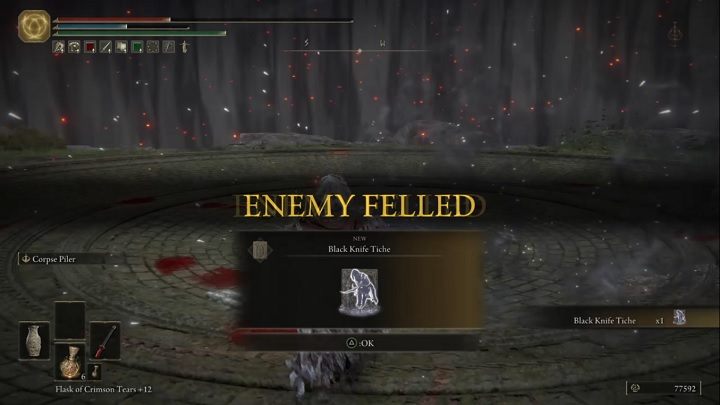 As you enter Ringleader's Evergaol, you need to get close to a hole in the ground to initiate the encounter. The hole is at the edge of the prison, north. Once you approach it, the enemy will appear on the arena and the fight begins. 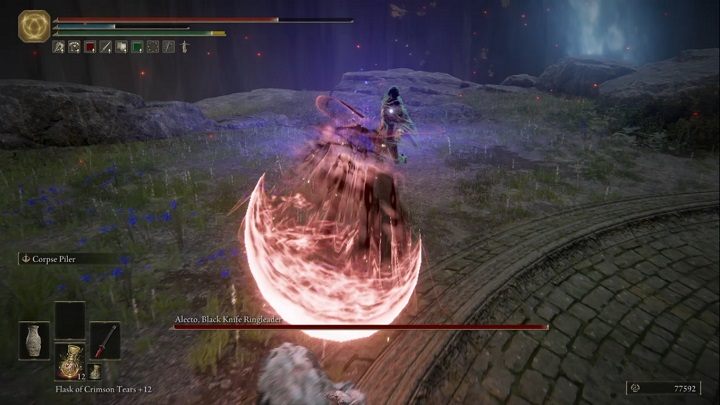 If you are at a medium distance from the enemy, he may fire a projectile (similar one to Black Knife Assassin). The best way of avoiding it is to dodge in any direction (preferably towards the enemy) moments before the projectile strikes you. If struck, you'll lose health over time, as a fire status has been placed on you. 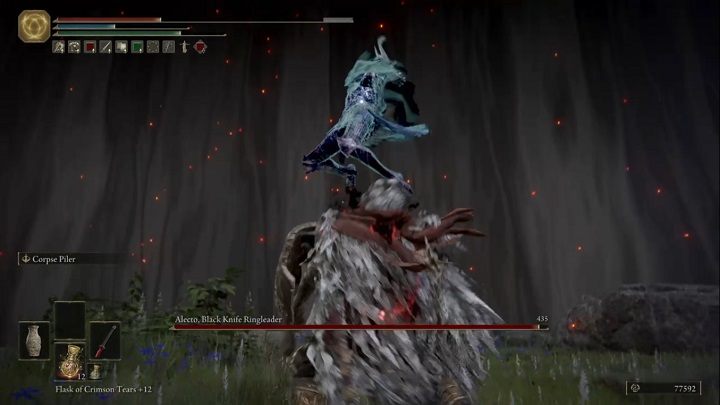 The opponent will also jump up, lifting his weapon. Dodge as it hits the ground and you will have an opportunity to land a few hits. After this attack, the opponent takes a few moments to rise and because of that, this is one of the best opportunities for an attack of your own. 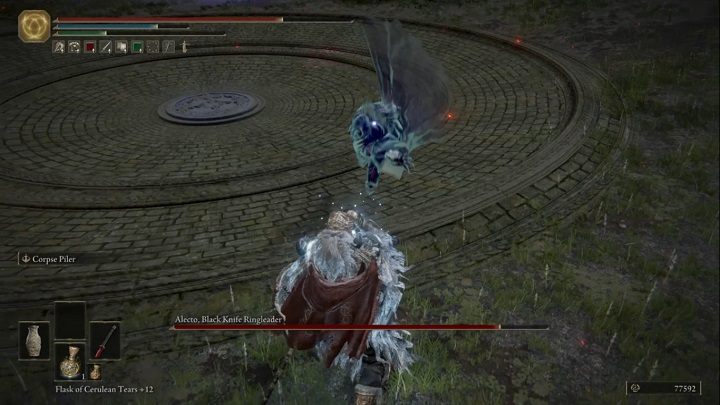 Alecto will try to grab you . You'll recognize that this attack is incoming thanks to the boss's raising his arm and quickstepping towards you. In such cases, you can move away from the opponent by dodging backward, or performing a perfect dodge at the moment when the grab is about to take place. If you're grabbed, the enemy will impale you with your dagger. 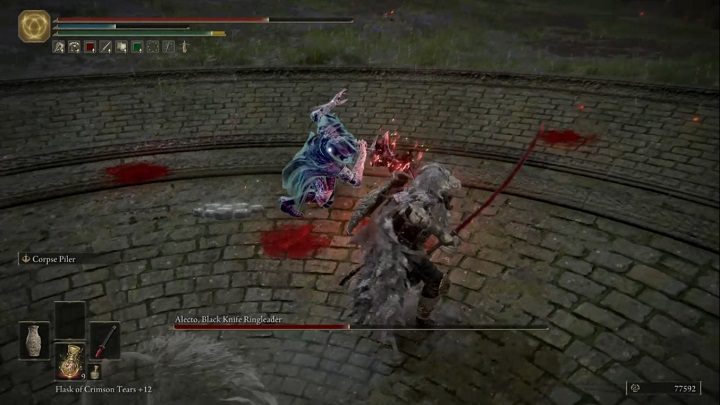 The opponent will sometimes set his dagger on fire and start charging a jump. When that happens, get away as quickly as possible, as he will strike with a tornado of cuts. Being struck means losing a lot of HP, as the attack places the fire status on you. Fire damage is one of the biggest dangers during this fight. 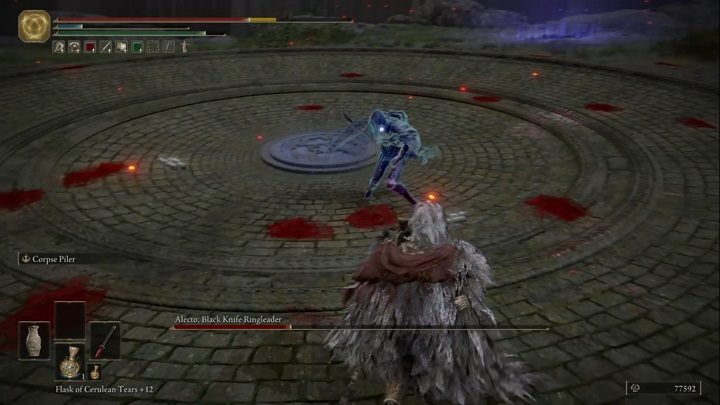 Alecto is a difficult and fierce opponent. Only good moment to strike appears after the jump attack - in other cases he most likely will punish you. Players equipped with larger swords can try to throw him off-balance but still have to watch out for retaliation. Don't throw multiple attacks. 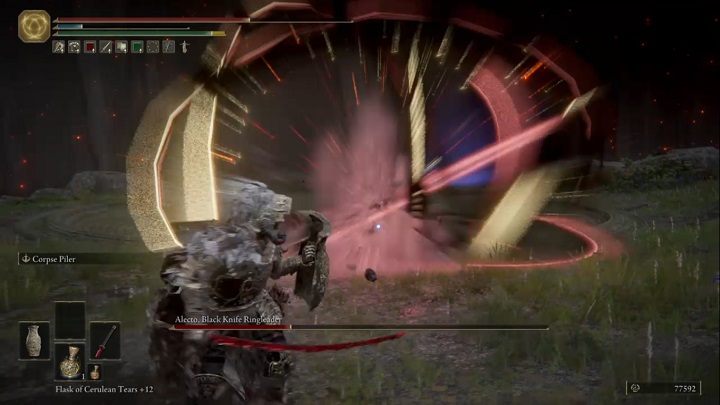 Using health items can be difficult, as the enemy seems to have infinite stamina - whenever you move away from it to try to apply a health potion, he will either attack with his melee weapon or fire a projectile So heal as often as you can and start the fight only after you've upgraded your bottle.