This page of our Elden Ring guide is dedicated to Dragonlord Placidusax, an optional boss encounter taking place in Cursed Farum Azula region. This enemy is optional - you can skip the encounter and still finish the game.

To get to the boss, start by traveling to Beside the Great Bridge site of grace. Once you're at the site, turn back and use the elevator that will lead you down. From the elevator, move to the small church next to the stairs. You will find 3 aggressive beasts here. Use the western exit and when you get outside, go to the edge - the cliff is directly opposite the mentioned exit. From there you will see rock ledges that you can follow. 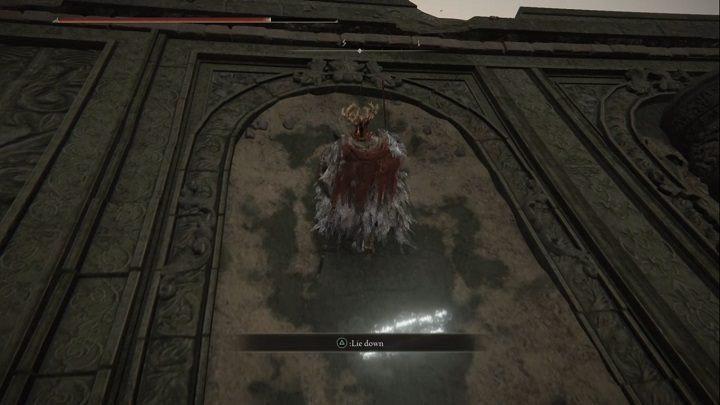 Eventually, you will get to a construction fragment, where you can lie down in one of the places (in front of the tornado) by interacting. After that, a cutscene will be activated and you will be transferred to the boss encounter. 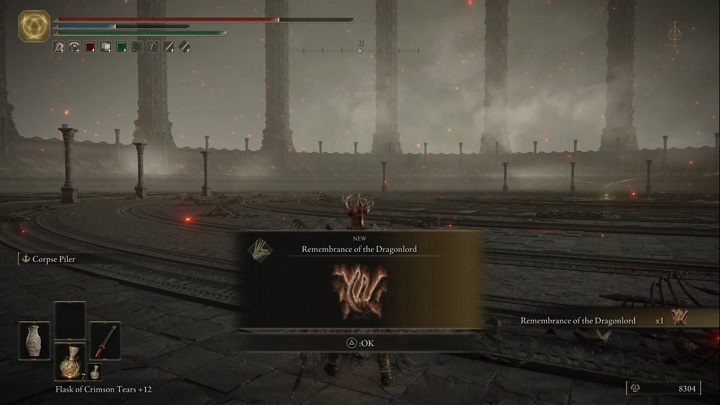 Defeating Placidusax is rewarded with Runes (280,000) and Rememberance of the Dragonlord.

Once you're in the boss arena, you'll have plenty of time to prepare. He will remain inactive until you get close to him. Use the opportunity and use Ashes or items that will help you in battle. 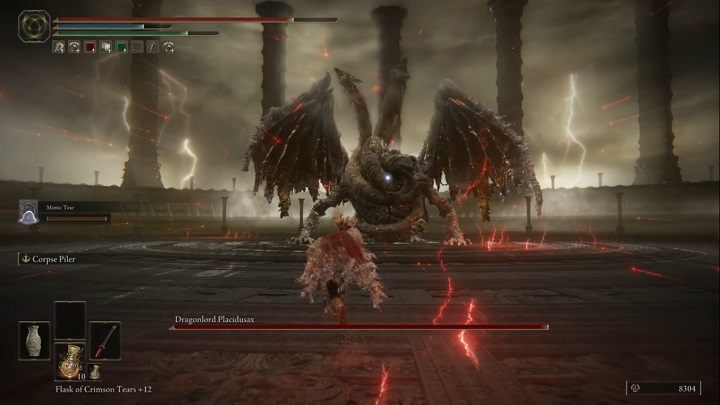 When you start approaching an enemy, it will wake up and start throwing lightning over a very large area. Observe the arena and try to avoid places where red lightning accumulates. This way you will avoid taking damage. 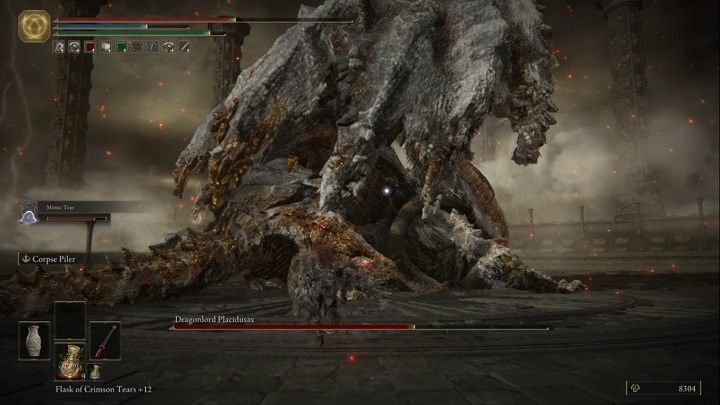 Once you're in the melee range of the opponent, it is best to run to his hindlegs. This way you will avoid attacks with the wing, front paws and tail swing. However, you have to watch out for lightning, which must be avoided with a timed dodge. Be prepared to dodge when you see lightning piling nearby . 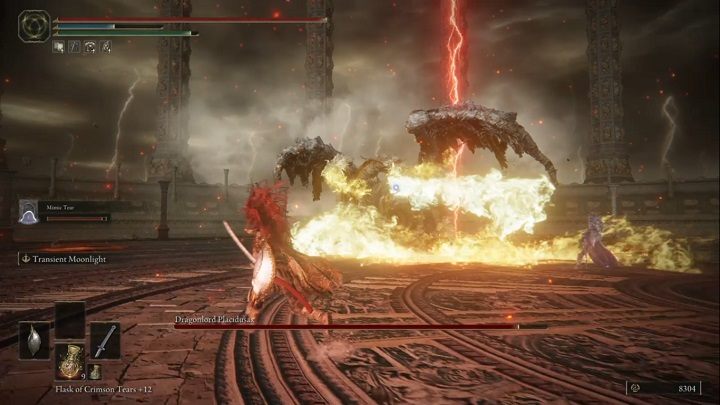 It may also happen that the enemy moves away from you, because it sometimes deliberately increases the distance and then uses an area of effect lightning attack or breathing fire over a relatively long distance. You have to avoid the fire attack even when you are near the Placidusax's hind legs - fire can reach you there as well . 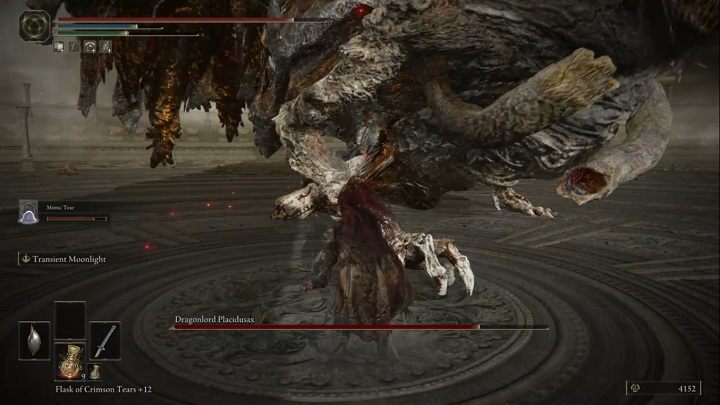 Placidusax will make it difficult for you to stay at its rear, especially when no one distracts him from the front. Therefore, when you notice that it is lifting the tail up, get ready to avoid the attack and then move to the back of your opponent as quickly as possible. At the same time, watch out for the fire attack that he can perform when you are directly in front of the dragon. 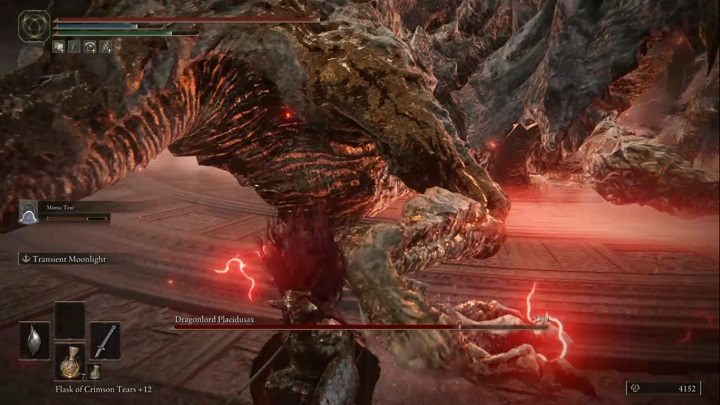 When you're in melee range, watch out for the moment when the enemy starts to glow red. This means that there is going to be a powerful explosion soon. At such a moment, it is best to escape the vicinity of the dragon. After this (and after any other attack) you have a moment to get close again. 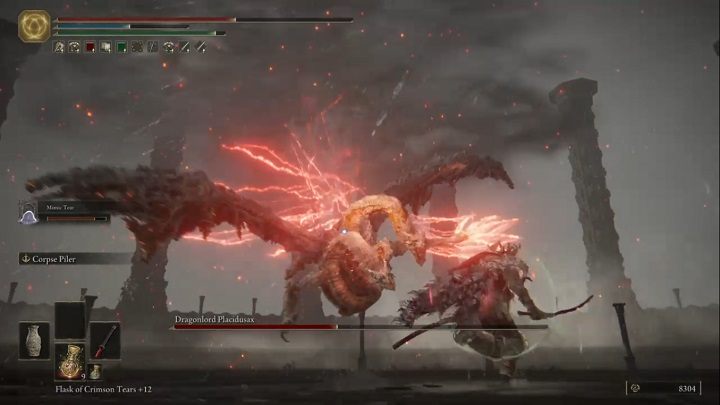 Halfway through the fight, the Placidusax will fly up and disappear, then materialize in the distance . After that, it will start flying towards you, ready to attack with his paw. Prepare to dodge on impact - this way you avoid taking damage. If you've summoned an ally, the enemy may focus on the second hero - presumably based on who attacked last. 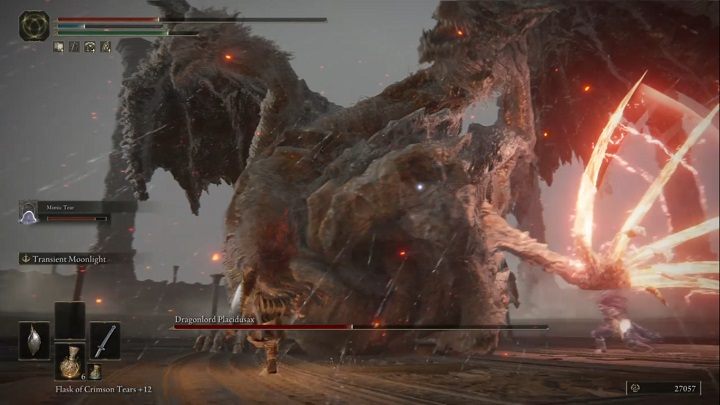 From now on, the enemy will teleport and attack you immediately after reappearing. However, unlike, for example, Astel, Naturalborn of the Void Placidusax teleports to your vicinity to attack. Apart from that, he also can materialize at a distance, but only to perform a strong attack - same as at the beginning of the second phase. 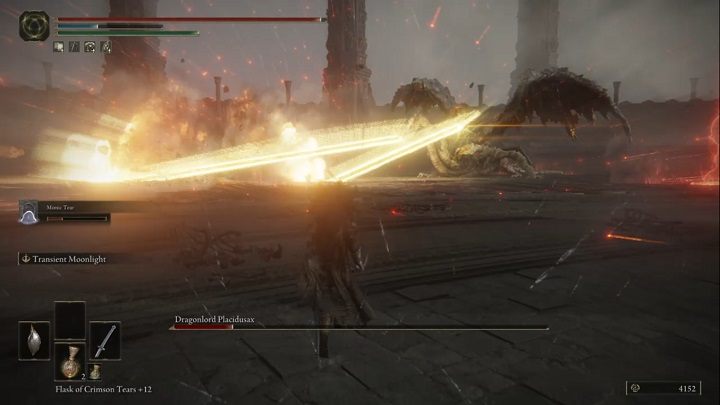 In the second phase of the fight, the opponent can also generate an area of effect lightning attack while airborne. In such a situation, you will have to observe the sky and the immediate surroundings. On the one hand, you have to avoid lightning, and on the other hand, get ready for the incoming dragon, which will land on you with impact and attack with a claw. Once the attack passes, expect him to fly away from you and start firing lasers, which is a long-range attack. At this point, it's best to get as far away as possible. However, beware of lasers as they can reach even the other end of this large arena. If possible, try to get behind the dragon and wait out the attack there. 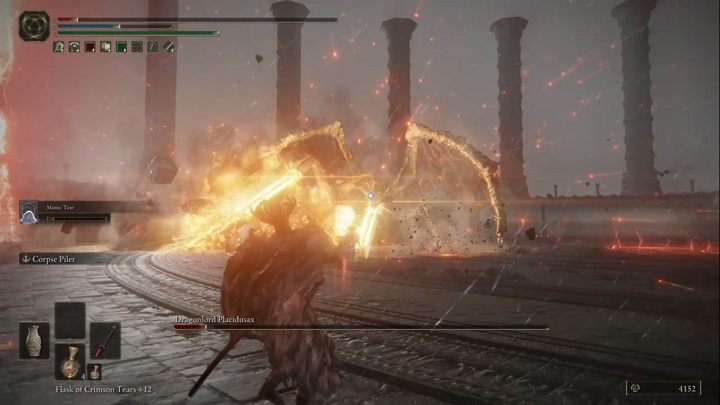 If you can see that the enemy is going to fire the laser in a straight line, it means that the worst attack is about to end . After that, all you have to do is get closer to the enemy, preferably behind his back and go on the offensive. At the end of the fight, Placidusax can also place a lightning into the ground, temporarily making your hero deaf - this is a signal to get away as far as possible you have a few seconds to do that.