This page of the Elden Ring game guide contains advice on how to defeat Rennala, Queen of the Full Moon located in the Liurnia of the Lakes region, namely the Academy of Raya Lucaria. You will learn how to fight the boss and which attacks you need to watch out for.

Rennala, Quen of the Full Moon is one of the game's main bosses. You have to defeat her to progress the story. She is located in the Academy of Raya Lucaria.

Below we present a universal strategy on how to defeat Renalla. 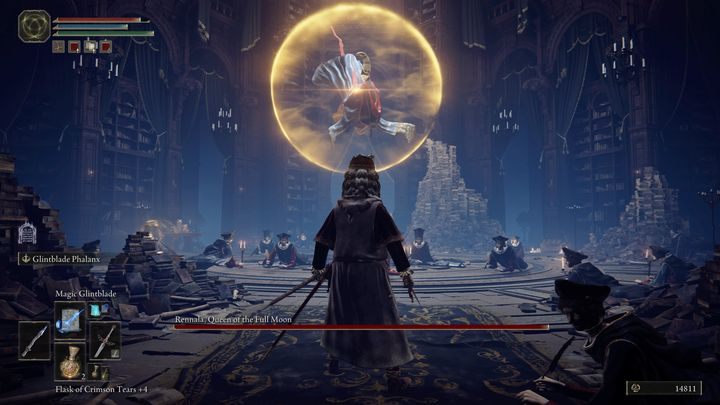 It may seem absurd, but to fight Rennala, you should have as many bottles of Crimson Tears as possible and as few Cerulean Tears as possible. Mainly because you won't deal any damage to the boss. She has a very high resistance to magic, so it will be much better to prepare to fight her in hand-to-hand combat than from a distance.

It is also worth wearing an amulet that reduces magic damage. This will be very helpful, as practically all of the boss's attacks deal magic damage. 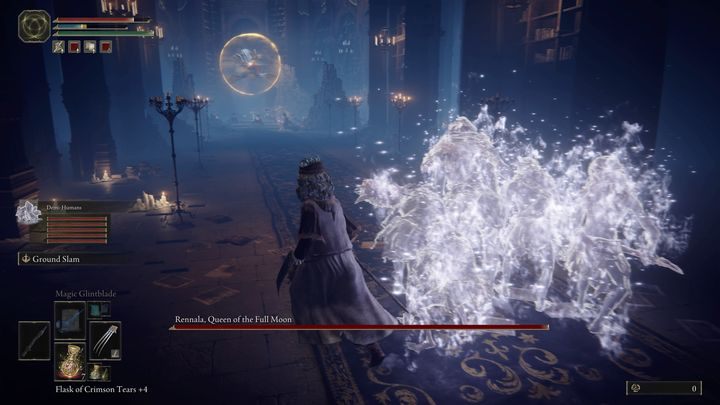 After entering the arena, it will be worth using the ashes of the Wolves/ Demi-Humans. In this fight, strength is in number, so choose ashes that summon more than two units. 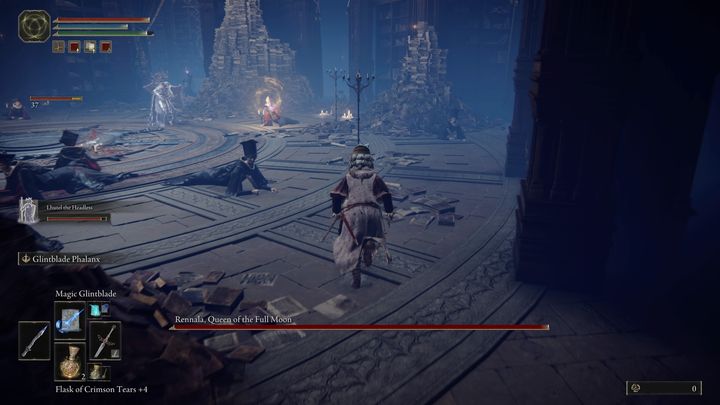 Then, run towards enemies with a yellow aura while avoiding projectiles or fire attacks. You don't have to kill them, you only need to hit the student who is keeping the barrier once. You have to do this up to three times for Rennala to fall to the ground. 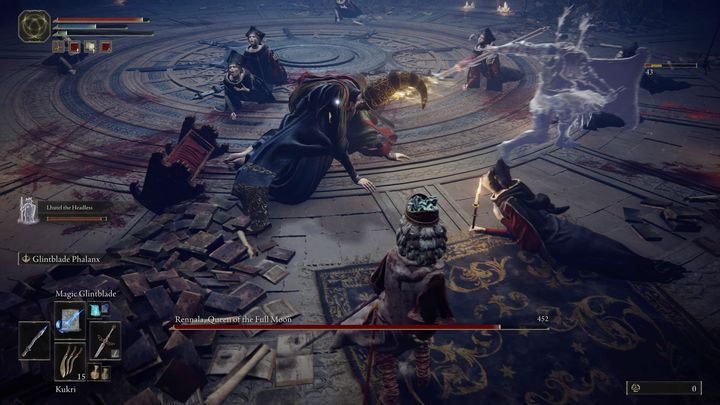 When the boss finally falls to the ground, focus only on attacking her. Don't deal her magic damage. A weapon that inflicts bleeding works well here. The best thing to do is to make each fall take at least 50% of her HP, thanks to which you will only have to destroy the barriers 6 times. 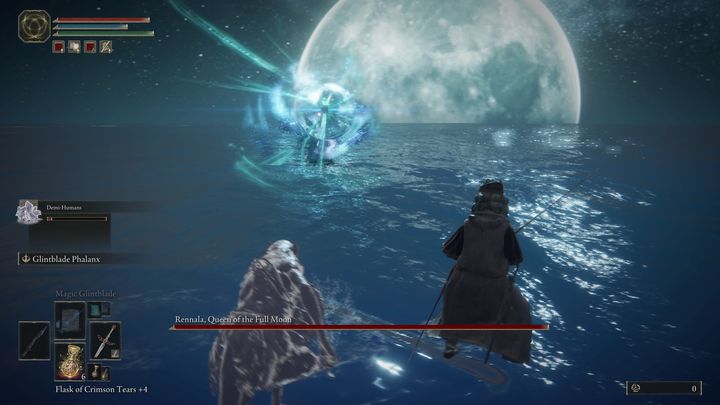 When her health bar drops to zero, the second phase will begin - you will be moved to a completely new arena. Again, you'll have to reduce her health bar to zero.

Rennala starts the second phase by creating a large laser beam. After a while, she will fire it at you. When you see the boss preparing for this attack, run left or right, then run up to the boss and start attacking her. 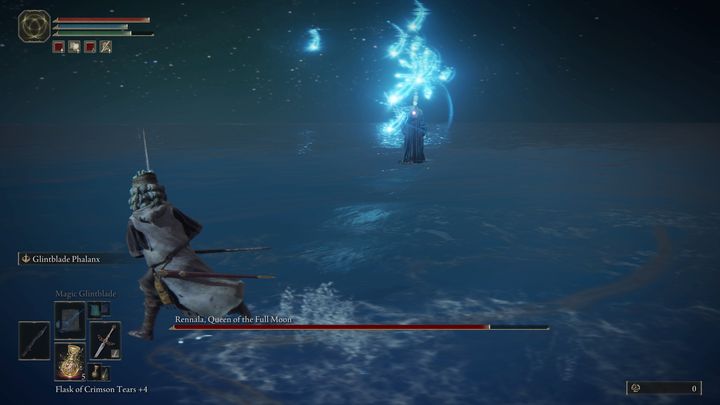 When Rennala is jumping away from you, she can create a number of magic projectiles that have good tracking. Running is also much more useful here than rolling. 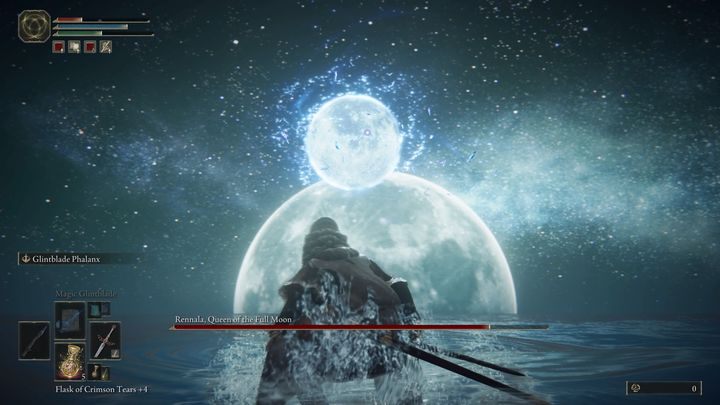 The boss can also create a magic missile that resembles a small moon. This projectile takes a long time to create, moreover, it is also slowly following you. It will explode after a few seconds, dealing high damage. Don't stand close to the moon-shaped projectile - run the other way. 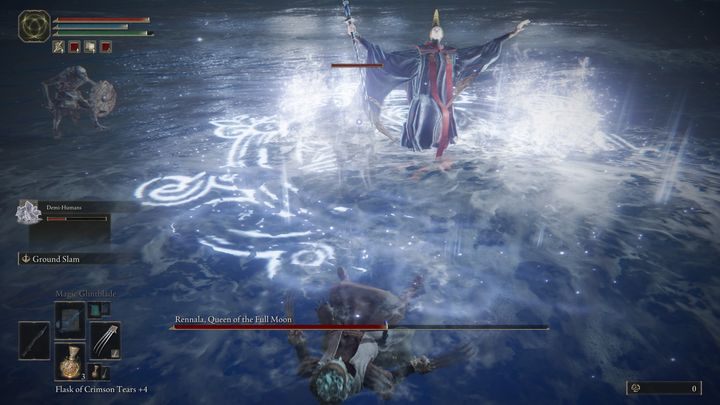 The biggest problem begins when Rennala has around 55% health. Then she will start summoning various creatures that will make the fight much more difficult. It could be a pack of dogs, or even a dragon or a giant... When she starts making her mark on the water, it will repel anything in the vicinity and summon reinforcements. When she is creating a sign and summon units, jump and do a heavy attack to prevent the formation of units! 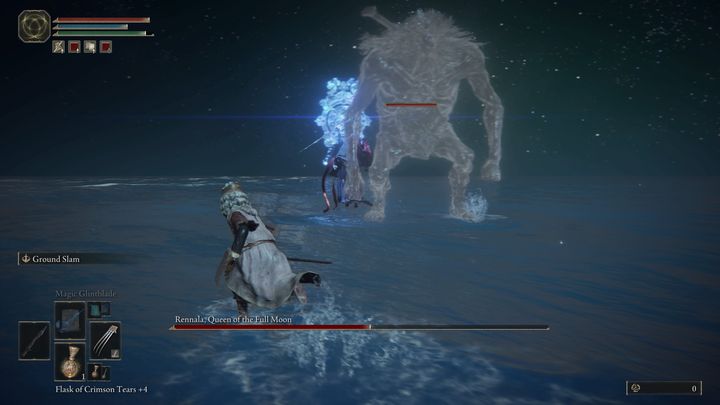 These copies are durable, but they die after a few attacks. Therefore, do not focus too much on them - try to kill Rennala as quickly as possible.