After confrontation with Celeb'hel in Arinth's Heights, you're very concerned about Aman'lu. If the Overmage was able to control one of Aman'lus elders then the whole city is in great danger! You have to get there!

Celia will open the passage to Aman'lu for you. Teleport to the Dryad Outpost and go to Arinth's Gorge. There's Celia near the bridge. Talk with her. She'll open the cave entrance. In the Passage to Aman'lu you will find the last sample for Ithara's quest (A Bound Hyena Head). Go back to the Dryad Outpost and finish this quest. Return to the passage and go to the Old Aman'lu. This is ruined part of the city, full of monsters. The part called The Town of Aman'lu is hidden behind the hill. Find it and you'll finish this quest. 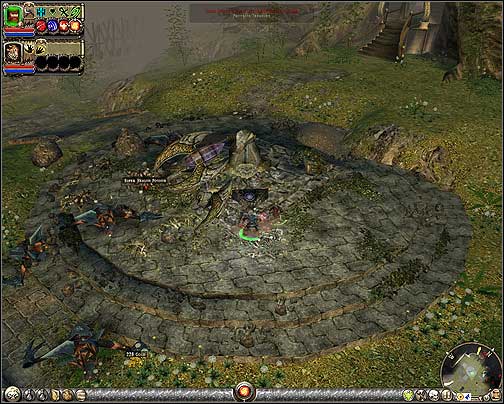 In the Town of Aman'lu you'll find your new base. There's a merchant, teleporter and so on. But you won't find here some of the characters from the Dryad Outpost like pet trainer or F&K Society Representative, so you'll have to teleport back to the Dryad Outpost when needed. At the inn [5] you can find an elevator to the arena known from DS 2, where you can take another side quest (2.2.4 The Aman'lu Arena). In Aman'lu you can find some characters, which are giving side quests. One of them can be done almost instantly, just speak with Kylis [9] (2.2.3 Minli the Fearie). Near the water can be found Liranth, he'll give you Vial of Aman'lus Blessed Water needed for Nari's quest (1.2.6 The Ancient Tome). At the inn you'll find Talain. He seeks for his lost companions (2.2.6 The Vai'kesh).

As you suspected, the Aman'lu has been destroyed. Many Elves died and those, who survived lost their powers. Their leader Danadel could help you in your fight with Overmage, but first you have to help him and his people. The city is danger caused by terrible monsters coming from the forest. They are created by demonic creature called Familiar Surgeon.

Danadel tells you that those creatures are coming from The Western Vai'lutra Forest and the Familiar Surgeon itself can be hidden in some underground hideout. The Vai'lutra Forest is divided into two parts (South, North). The path from Aman'lu leads to south part of Western Vai'lutra Forest [1]. This place looks really creepy. Not far from the forest entrance you'll find strange building with terrifying doors [3]. You can't open those doors at the moment, so go to the place, where you'll find Ressa [6]. This Blood Assassin gives you a side quest (2.2.5 Questionable Methods). Activate nearby teleporter [7] and go to the Vai'kesh Forest, [18] where Talain's people had been lost (2.2.6 The Vai'kesh). As you enter the Vai'kesh Forest, you'll find a Vai'kesh camp, [Western Vai'kesh Forest - 2] where the 2.2.6 quest continues. Go into the deeper part of the forest. At the end activate teleporter [11] and just behind it, you'll find the entrance to the Familiar Surgeon's hideout [12]. After entering there (An Abandoned Elven Ruin) you'll see a real horror. It's a place filled with blood, body parts and mutants. At the end of this dungeon [2] you'll meet the author of this mess. He's very dangerous and hard to defeat. He summons crawling minions and shoot series of magic projectiles, which can do serious damage as they bounce from the walls! Very helpful in this fight would be high Death Magic Resistance. You can always flee from Familiar Surgeon's chamber, when it's too hard. After killing him speak with Dranjul. There's another Familiar Surgeon hidden somewhere! You receive two keys: Calennor Stronghold Key and Unidentified Object. First key opens the doors to the place, where's the second creature hiding. Second is for the strange doors you saw earlier [Western Vai'lutra Forest - 3]. 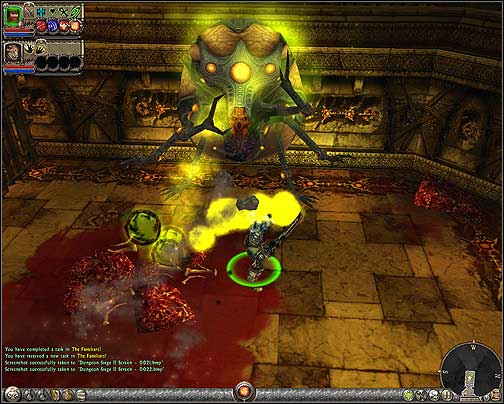 Now it's time to use the key you've got after defeating first Familiar Surgeon. Go to the building with strange doors [Western Vai'lutra Forest - 3]. Use the key and kill the mutant. Enter the tomb. You're in the place called An Ancient Stockade. There's nothing special in here, just some hidden rooms with treasures (search with map). After exploring this place, go deeper into the Vai'lutra Forest. You'll encounter Bound Elves, which will drop vials of blood, when killed. These are needed for Ressa's quest (2.2.5 Questionable Methods). During your journey through the forest, you'll find another tomb, [11] where another side quest waits (2.2.8 Treasure Hunting). When you arrive to the Calennor Wood activate the teleporter [The Calennor Wood - 3]. In this forest you'll find next item for Nari's quest (1.2.6 The Ancient Tome). Kill the Bound Naldrum [6] and you'll get the suspended soul (A Pixie Preserved in Amber). There's also strange place full of flowers, [7] where another side quest awaits (2.2.2 Celeb'hel The Elder). Go to the Calennor Stronghold [10]. This creepy place is full of secrets. Search with map for hidden rooms. Near the entrance is a room with a corpse. It's no ordinary corpse, because it has sticking Vai'kesh sword. This will lead you to 2.2.7 The Vai'kesh, Part 2. Search the rooms for stones, [6, 12, 15] which can be used in special room [8] for opening hidden chest. In the prison area you'll find Celeb'hels Soulstone needed for quest 2.2.2. At the end of this place waits for you another Familiar Surgeon. Fight with him looks the same as the previous one. 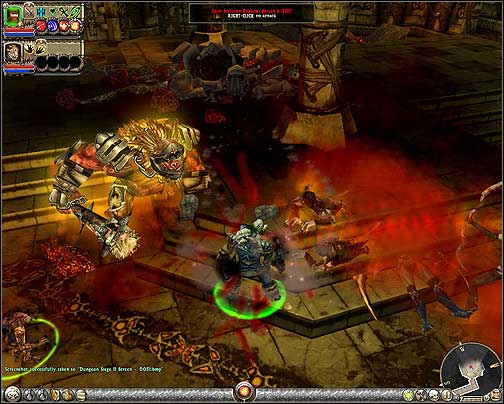 One of the monsters waiting for you at the Calennor Stronghold.

You've defeat two Familiar Surgeons and the Elves won't help you! They want to isolate from the world and heal their wounds... Danadel will tell you very interesting thing. The Dryads leader is a man! He wants to gather all the magic power from Aranna to bring back peace and order. It seems that you'll have to talk with this freaky guy. 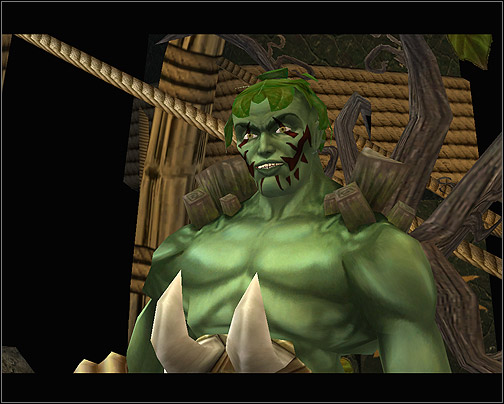 After everything you've done for Elves Danadel at least will open for you portal to Solanum. After you arrive there the real masquerade begins. The naive Dryads follow every order of Overmage in disguise. After he spots you, Keirok the Devourer is summoned. This beast is huge and strong. It uses some nasty special attacks, so try to avoid direct combat. When he is killed, use the Overmage's portal. You'll be teleported to a strange cavern and a group of Dwarves will come to speak with you. 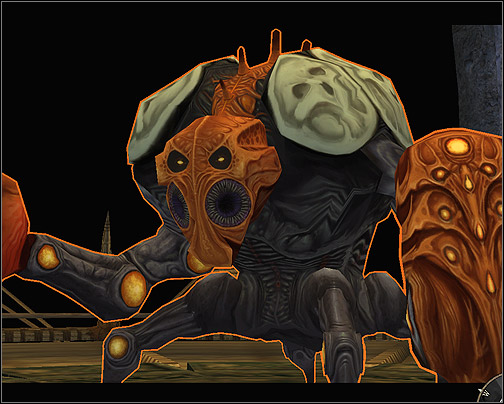