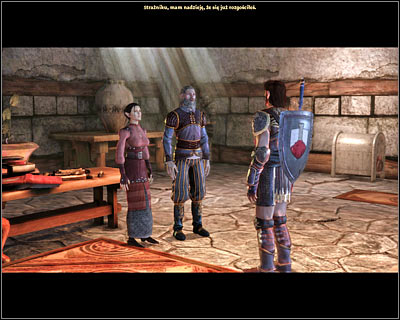 Description: This quest will begin in [Denerim - Arl Eamon's estate] (M71, 1). Proceed to Eamon's office (M71, 2) where you'll have a chance to talk to arl himself and to one of the servants of queen Anora. Doing this will trigger Saving the queen quest (more on that in Denerim quests category). I would also recommend completing three other quests during your stay in Howe's estate - Tortured noble (Denerim category), Missing in action (Chanter's board category) and The lost templar (Denerim category). 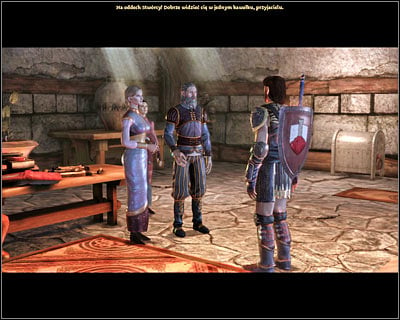 There are three ways for you to advance to the next part of this quest. The first method will require you to leave Howe's estate by successfully defeating Sir Cauthrien (M73, 7) and a dozen of other enemies (final part of Saving the queen quest). The remaining two solutions are tied directly to the fact of being captured by Cauthrien and having to solve Captured! quest by escaping from [Fort Drakon] (M79, 1). Here you'll have to choose between using your own skills to escape or by relying on the rest of the team. Either way you'll have to return to Eamon's estate after the visit in Howe's place. This time you'll want to talk to Eamon and to queen Anora (M71, 2). 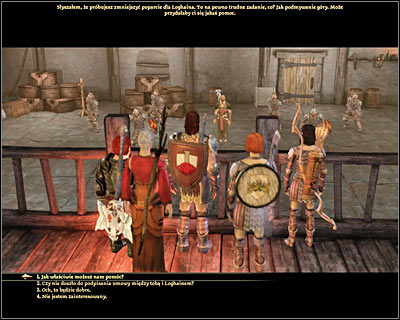 You'll eventually find out that you'll have to travel to the elven alienage to see what's going on down there and a new quest will be added to your list of assignments - Unrest in the alienage (Denerim quests category). Naturally this mission will have several endings, but your top priority will be to collect the documents (M68, 8) proving that Loghain knew about the elven slaves being sold by the slavers. Save your game before you hand over the document to Eamon (M71, 2), because you'll have to make some crucial decisions in the near future. 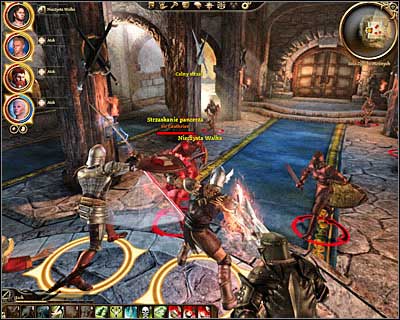 Start a new conversation with arl Eamon (M71, 2) and inform him about your findings in the elven alienage. You'll also have to give him the documents implicating Loghain in the slave trading business. You may leave the estate now. Notice that Alistair has to become a member of your team for the purpose of this quest, so don't forget to equip him properly if he was spending a lot of time in the campsite up till now. Open the map of the city and go to [Denerim - Royal palace - Hall of the Landsmeet]. Once you've arrived (M71, 4) you'll either head forward right away or meet Sir Cauthrien (if you didn't kill her while exploring Howe's estate - Saving the queen quest). If Cauthrien is present in the room you'll have to choose between fighting her and convincing her that she should let you through (successful persuasion or intimidation attempts). The landsmeet will begin as soon as you've clicked on the door leading to the main hall of the royal palace (M71, 5).

CRUCIAL FACTORS THAT CAN AFFECT THE QUEST:

This section contains a list of important factors which can affect the outcome of the landsmeet in your favor. Make sure to read everything to know what has to be done in order to play out everything as planned. 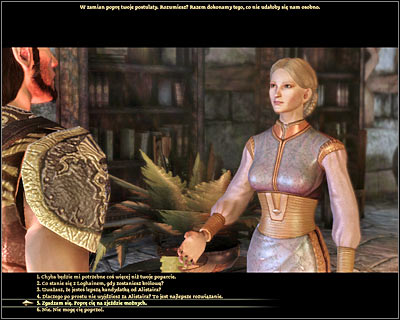 1) Talking to Anora (M71, 3) can have a serious impact on the outcome of the landsmeet. You can find the queen in one of the chambers of [Denerim - Arl Eamon's estate]. Start the conversation and agree to back her up in her efforts of becoming a queen, even if you plan on changing your mind in the future. You can also convince her that she should marry you or Alistair. Read the Possible endings section of this quest to find out more on how this can be achieved. If you ignore Anora entirely she'll align herself with Loghain during the landsmeet, increasing his chances of winning the vote.

2) It's important to fulfill two subquests tied to nobles from the landsmeet - Tortured noble and The lost templar. Doing this will give you 100% votes from at least two nobles present at the meeting. 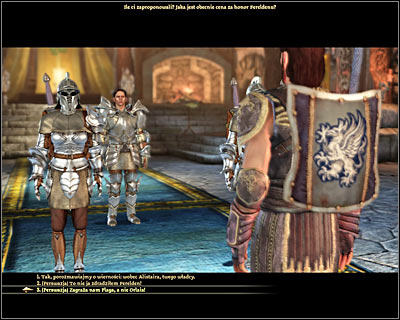 3) Use your persuasion skills at the beginning of the conversation with Loghain (during the landsmeet).

4) Each time you're given a chance to say something (during the landsmeet) focus on exploiting subjects uncomfortable for Loghain instead of pointlessly arguing with him. You can ask him about the people he was holding in Howe's estate, about his knowledge of the elves being sold as slaves or about trying to use poison to kill arl Eamon. 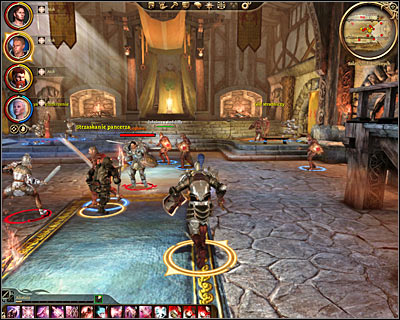 After the main character, Loghain and Anora have finished their statements a vote is going to take place here. In order to get the majority of votes you'll need to have Anora on your side, two nobles (from the subquests) and you'll need to convince at least one additional noble by sharing information on Loghain's dirty deeds. If you lose the vote a huge battle is going to take place in the palace (M71, 6). As soon as the battle has started focus all of your efforts on attacking Loghain (he's a mini-boss), because when he loses enough health you'll automatically advance to the next phase of this quest. 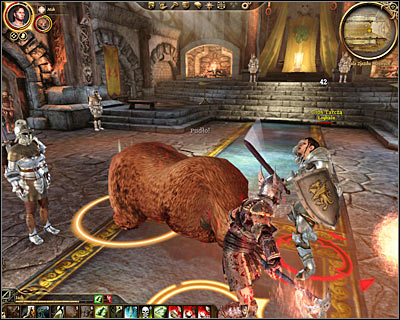 If you do manage to get the majority of votes Loghain will have hard time dealing with the defeat. In this case you'll be allowed to attack him and his men or to challenge him to a honorable duel. I wouldn't recommend the first option, because you would be dealing with a lot of enemy units. Instead ask him to fight alone and when he agrees choose the person from your team for the purpose of this fight (M71, 6). If you're playing as a warrior as a rogue you should be able to defeat him yourself. Otherwise choose Sten or Oghren, because Loghain's attacks are going to be powerful and a mage wouldn't survive them. The duel will also take place if you lost the vote but managed to defeat Loghain for the first time (during the huge battle). 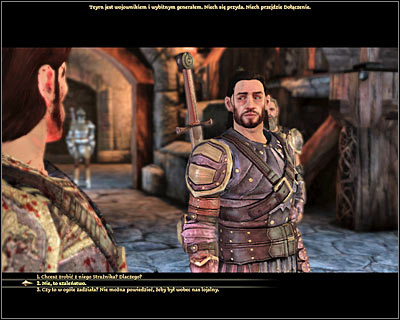 Once you've defeated Loghain in a battle or in a duel you'll trigger a cut-scene and you'll have to make an important decision. You can choose to keep Loghain alive by listening to Riordan's plan, but this decision would have some serious repercussions in your relations with Alistair. To make it more clear - Alistair would leave your team and there's a chance that he would be executed. You could prevent this from happening by reminding Anora that she owes you a favor and in this case instead of being killed he would going to be banished from the kingdom. The only good news from this is that Loghain would become a member of your team until the end of the game. The best way to end this quest is to kill Loghain and you can do it yourself or you can ask Alistair to do the dirty work. Once that problem has been solved you'll have to decide who should become the next king (or queen). 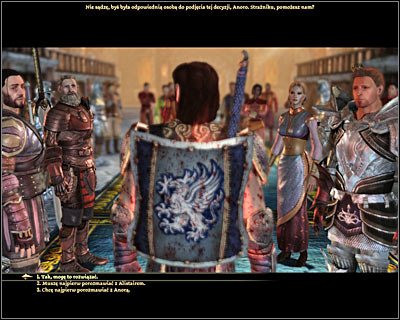 1) Anora becomes a queen - There are a few ways to get to this particular ending. Anora would automatically become a queen after unsuccessful negotiations, however you can also pick her yourself when at the end everyone will ask for your opinion. It's not a bad choice and besides Alistair is going to be happy that he won't have to play any major roles in the kingdom.

2) Alistair becomes a king - In this case you would have to show your support at the end of the meeting when everyone will ask for your opinion. You should know that Alistair won't be happy that he's been chosen to become a king, so you should calm him down a little during the conversation which will follow your initial choice (otherwise you'll lose a lot of relationship points with him). The interesting thing about this ending is that Anora is going to locked in a tower until further notice.

3) Alistair marries the queen - This is where it gets a little more complicated, because you'll have to perform several persuasion attempts. I would recommend that you make some preparations prior to going to the palace and even before you talk to Eamon to tell him about the situation in the alienage. Alistair will be reluctant to the whole idea, however he will agree to the offer if you use persuasion or cunning. Bear in mind that the queen at his side doesn't have to be Anora, because if you're playing as a female character you may step in her place.

4) Main character marries the queen - Naturally you'll have to be playing as a male character in order to pull this one off. Make sure to talk to Anora before going to the palace. During the conversation you can present her with an idea of getting married. Once this has been done perform all the actions described above and don't interfere until the last conversation has started. This is when you'll have to present everyone with your idea. The important thing here is not to kill Loghain, because otherwise Anora will not marry you. Thankfully this can be easily avoided by ordering Alistair to perform the execution.

5) Main character marries Alistair - Naturally this option will become available only if you're playing as a female character. I would strongly recommend talking about this with Alistair before the landsmeet, so he won't be surprised by your request, you won't lose a lot of relationship points and you won't have to use persuasion to convince him to your plan. In order to increase your chances of him agreeing to your plan you should be playing as a noble human, however other races also have a chance with him.

After the landsmeet has ended you'll automatically return to [Denerim - Arl Eamon's estate] (M71, 7) where you'll have a chance to talk to the new king, to the new queen or to the new couple and you'll find out that the next step will be to travel to Redcliffe in order to prepare for the final battle with the archdemon.