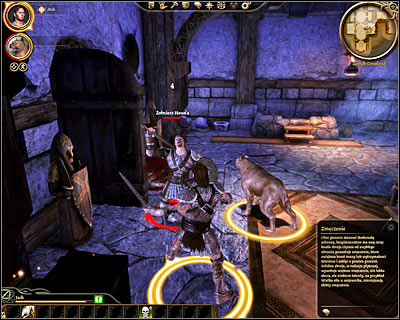 Description: You start in [Cousland Castle - Your room] (M15, 7) and you'll be presented with a short cut-scene. Wait for the main character to stand up and pause the game before enemy forces show up. Open your inventory and equip your character with the best items you've got. If you have a moment you can also open a nearby chest and collect additional things. You should now wait for Howe's soldier to show up, so you won't be attacked by Howe's archer at the same time. Once the soldier is down take care of his colleague. Don't forget to loot both bodies, because you'll find gold and a short bow. 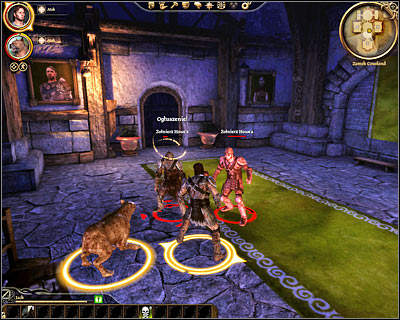 Exit your room and turn left where you'll have to defeat two other soldiers. They will be standing in front of [Cousland Castle - Teyrn's room] (M15, 8). Eliminating them will allow you to save your mother Eleanor and she'll automatically join your team (don't forget to give her some kind of a weapon). You can also explore her husband's quarters, collecting valuable items from one of the crates. Visit [Cousland Castle - Fergus's room] (M15, 6) if you have a spare moment and you'll make a shocking discovery. 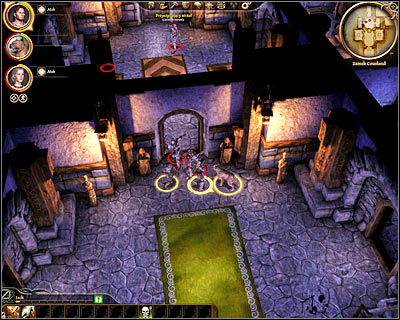 You'll now be moving back to the main hall and it shouldn't come as a surprise that other enemies will be waiting for you along the way. Some of them will even respawn if you decide to revisit areas you've secured in the past. I would always recommend focusing on eliminating enemy archers and only when they're gone to attack the soldiers. A new cut-scene will be triggered when you're close to the atrium (M15, 9). Don't forget to ask your mother all the necessary questions, so aside from finding out about the secret passageway you'll also find out about the treasures and you'll start a new subquest (The Cousland treasury). 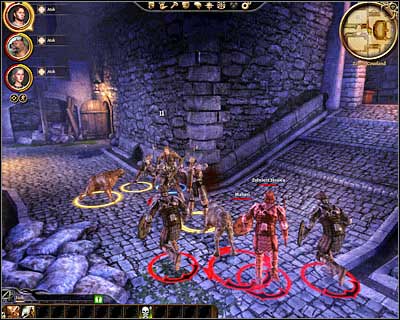 Head east where you'll meet one of the slaves. You can attempt to persuade him to rejoin the battle, but it won't be a big difference. Be careful, because there are a lot of enemies in the area and for the first time you'll also be dealing with other mabari. Keep heading towards [Cousland Castle - Main hall] (M15, 1). Notice that the northern passageway near the dining room is blocked, so as a result you'll have to move south-east, passing by [Cousland Castle - Library] (M15, 10). 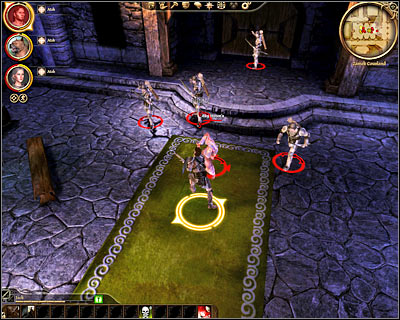 You can now decide to secure all nearby rooms (including the chapel) or you can proceed directly to [Cousland Castle - Main hall] (M15, 1). Once you're inside you'll have to assist sir Gilmore and other guards in defeating Howe's men. It's extremely important to attack an enemy mage as soon as possible, because otherwise he would start using powerful spells. Once the mage is out of the picture you can attack other hostile units. Talk to Gilmore when it's safe and ask him about your father Bryce. 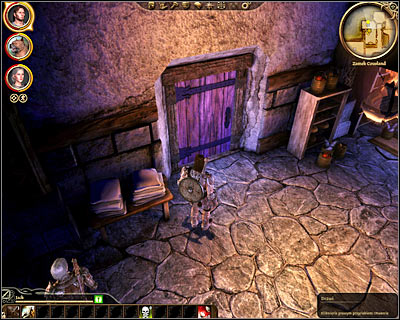 Choose the northern exit from the main hall (M15, 13) and once you're in a corridor start heading towards [Cousland Castle - Kitchen] (M15, 3). Be careful, because some of the remaining enemy units may attack you along the way. Once you're inside the kitchen click on the door leading to [Cousland Castle - Pantry] (M15, 4). Talk to your dying father, as well as to Duncan. You should know that even if you refuse to join the Grey Wardens Duncan will still recruit you by force. Finishing this quest will allow you to end the prologue.