Way to unlock the quest: Complete the Here Lies the Abyss quest 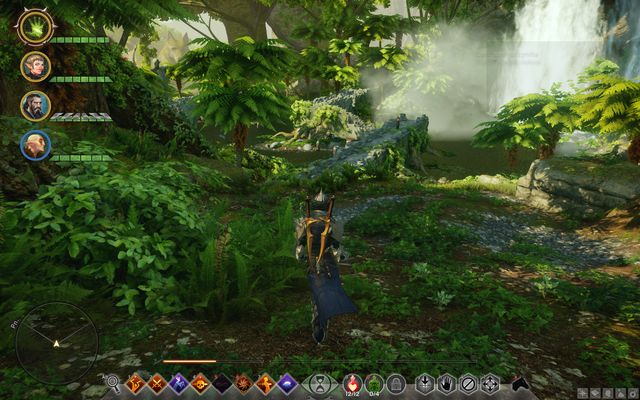 After you have completed the Here Lies the Abyss quest, you can start another one, in the main storyline. It has been divided into several stages and the recommended level, to complete the quest is 16-19. To receive the quest, go to the war room and activate the operation with the name of the mission - cost: 40 Power points.

You will travel to the Arabor wilds (M29,1a). It is merely a transition area, which is the battlefield to various units of the Corypheus's army. You can even skip the battle and simply push forward, until you reach the Mythal Temple (M29,1b). 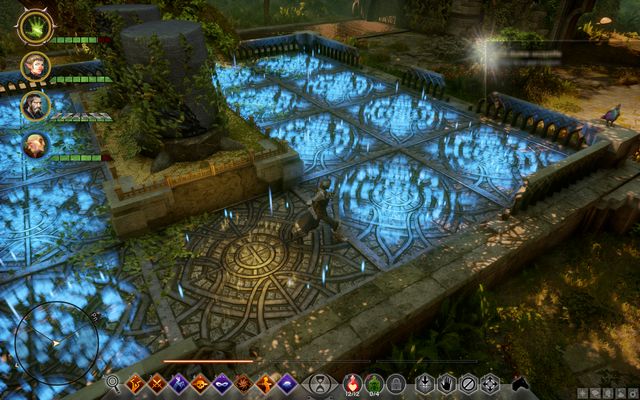 The mosaic in the temple

At the Mythal Temple, approach the mosaic in the center (M29,1c). You note that these are slabs that glow blue, after you walk onto them. You need to light all of the slabs, but there are some rules, though:

As soon as you manage to solve the puzzle, door on the upper floor opens and you can proceed into the temple. 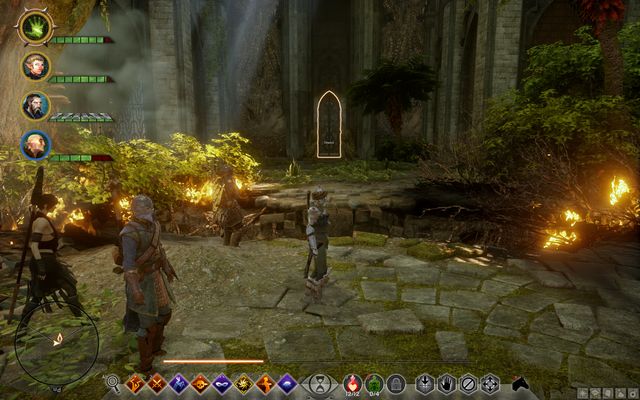 Two paths: the door in the distance or the hole next to you

Now, there are two paths to choose from: perform the ritual (M29,1d-1f) and cross the main door (M29,1g) or enter from below (M29,1h) after the Red Templars. What makes the choice important is that the elven guards become turn hostile towards you, if you skip the rite. On the other hand, if you perform it, they become your allies and additionally, they guide you across the areas in the temple, away from the enemies, through secret passages that would be inaccessible to you, otherwise. Also, you can choose a compromise - perform the ritual in the temple and follow the tunnel behind the back of the Templars - also then you will gain the favor of the elves. 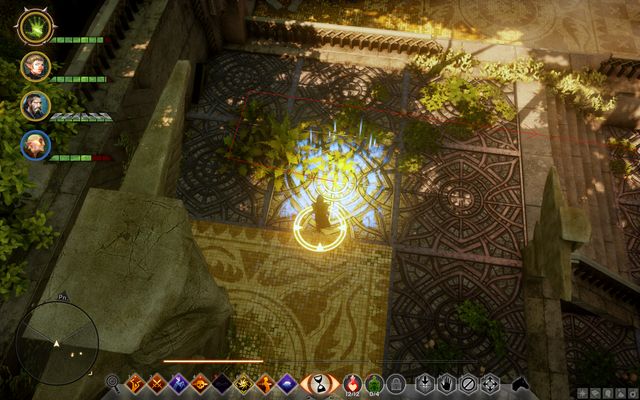 To perform the rite, you need to solve puzzles to the one that you had to handle at the temple's entrance. The first ritual (M29,1d) is this: walk into the center of the mosaic and deactivate all of the slabs. Walk onto the second one, from the wall, turn left and walk over the outer rim, over the stairs down. Turn right and get to the end, where you walk over to the neighboring slab. Return over the outside rim. After you walk onto the stairs, go left and light the rest of the slabs. After the first mosaic is alit, hop over the low wall and make the pattern over the second mosaic, in a nearly identical way - start with the first slab in the very corner. 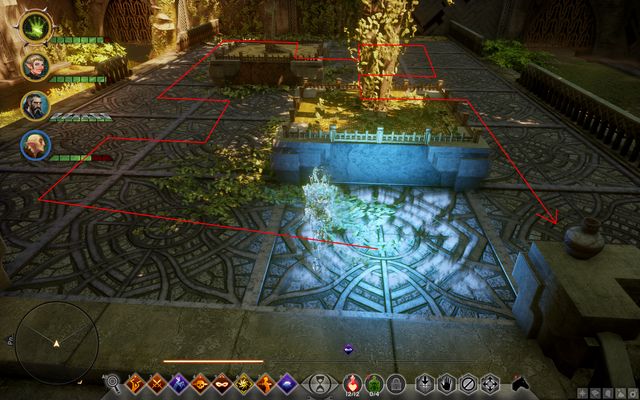 The second ritual (M29,1e) is exceptionally easy: you simply need to stand on the slab on the stairs and go left. Zigzag ahead and walk around the second statue on the left. There, keep zigzagging up until you return to the starting slab. 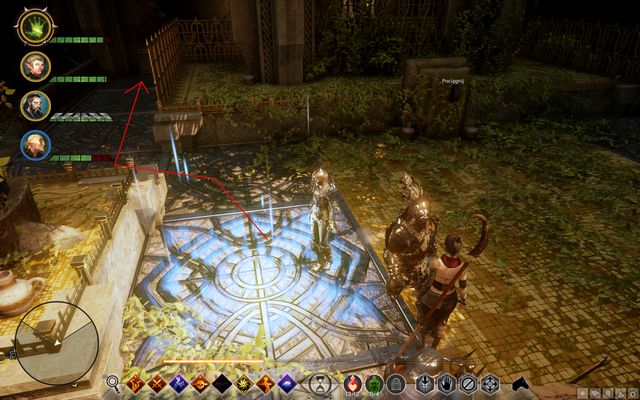 The last ritual (M29,1f) may be trifle troublesome. First, walk into the center and use the lever. Now, stand on the single slab on the left and head towards the opened gate. There, zigzag your way over all of the slabs. Return by keeping at the same height as the starting slab. Stand on the golden flooring and use the lever. Now, as you are standing on the rim, zigzag your way onto the opposite edge. Then, light all of the slabs around the statue in the center. 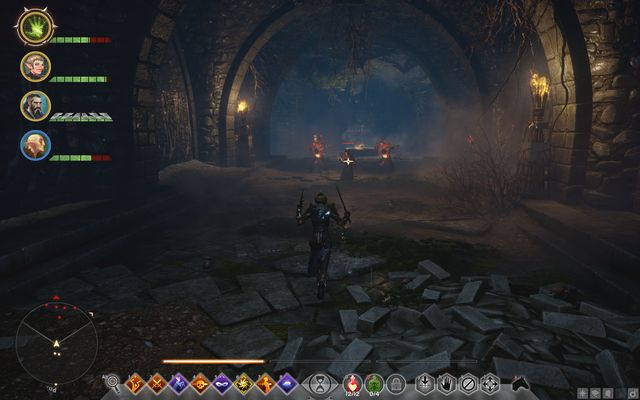 The sewers under the temple 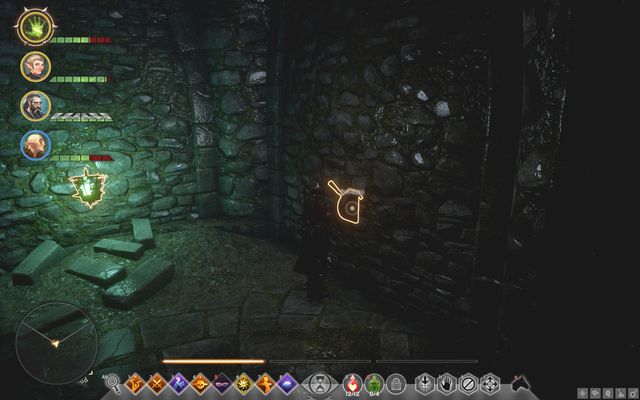 The lever for the grate

At the other side, there is a passage behind a grate - you can open it with the hidden lever (M29,1i) next to the veilfire torch. 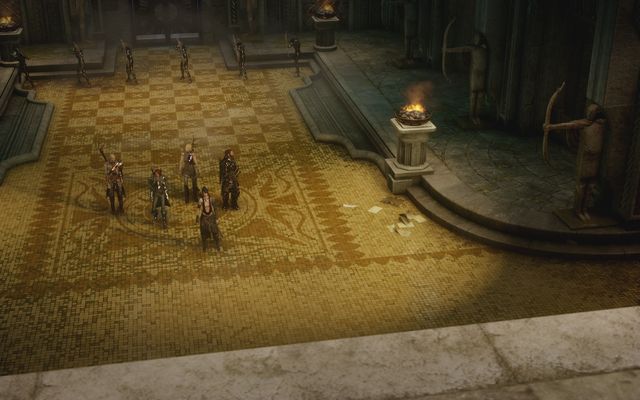 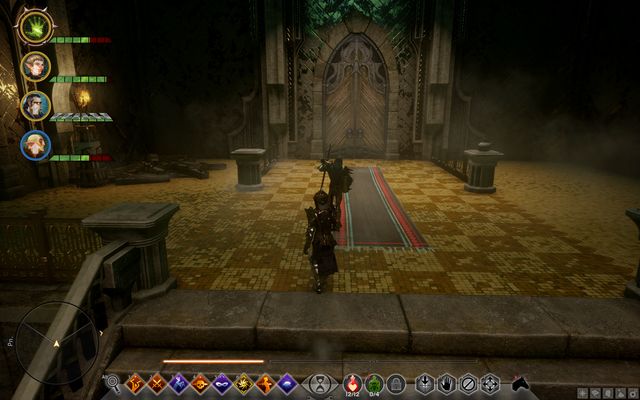 If you decide on passing on your own, you are up to quite a lot of fighting, both the elves and the Red Templars. If you see that they have a slight advantage over you, you can first let them fight each other and simply finish off the remnants. 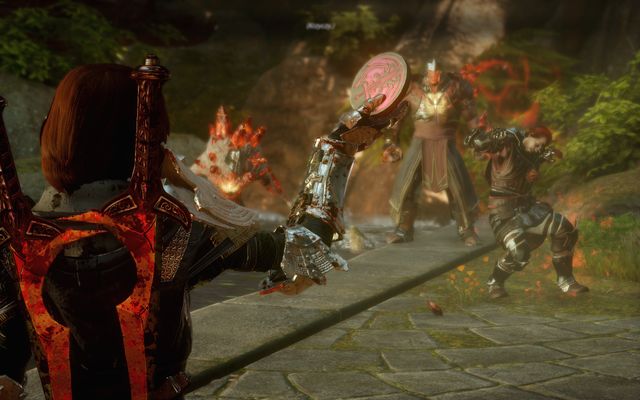 The artifact that you can use to destroy Samson's armor

After you reach the last door, climb down the stairs. There, you encounter Samson - Corypheus's right hand man. Note! If you have earlier completed, for Cullen, "Before the Dawn" quest, you will now be able to use the artifact to destroy Samson's armor. 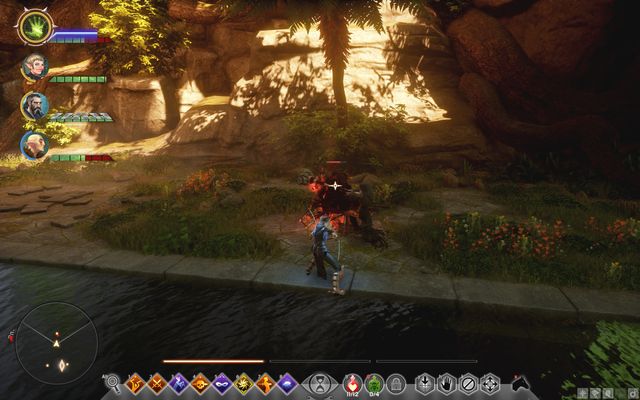 If you have allied yourself with the elves, Abelas is going to help you fight Samson. The enemy is sluggish, but he is tough and the battle may take a while. If you are playing as a ranged character, do not let him land attacks on you and do not interrupt yours. If, however, you fight at a short distance, watch out for Samson's swings and occasional spinning attacks, across the arena. As you deplete his health bar, he will become stronger and stronger, but also more and more sluggish, at the same time. His parameters go up every 25% of health. 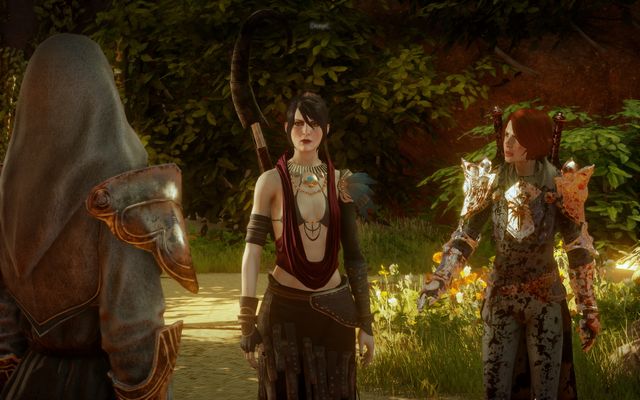 Make a decision at the well

After the battle, you see a cutscene, where you decide who is to receive the well's power. You can either point to yourself or to Morrigan. Your decision will determine who will handle conversations, until the end of the game.